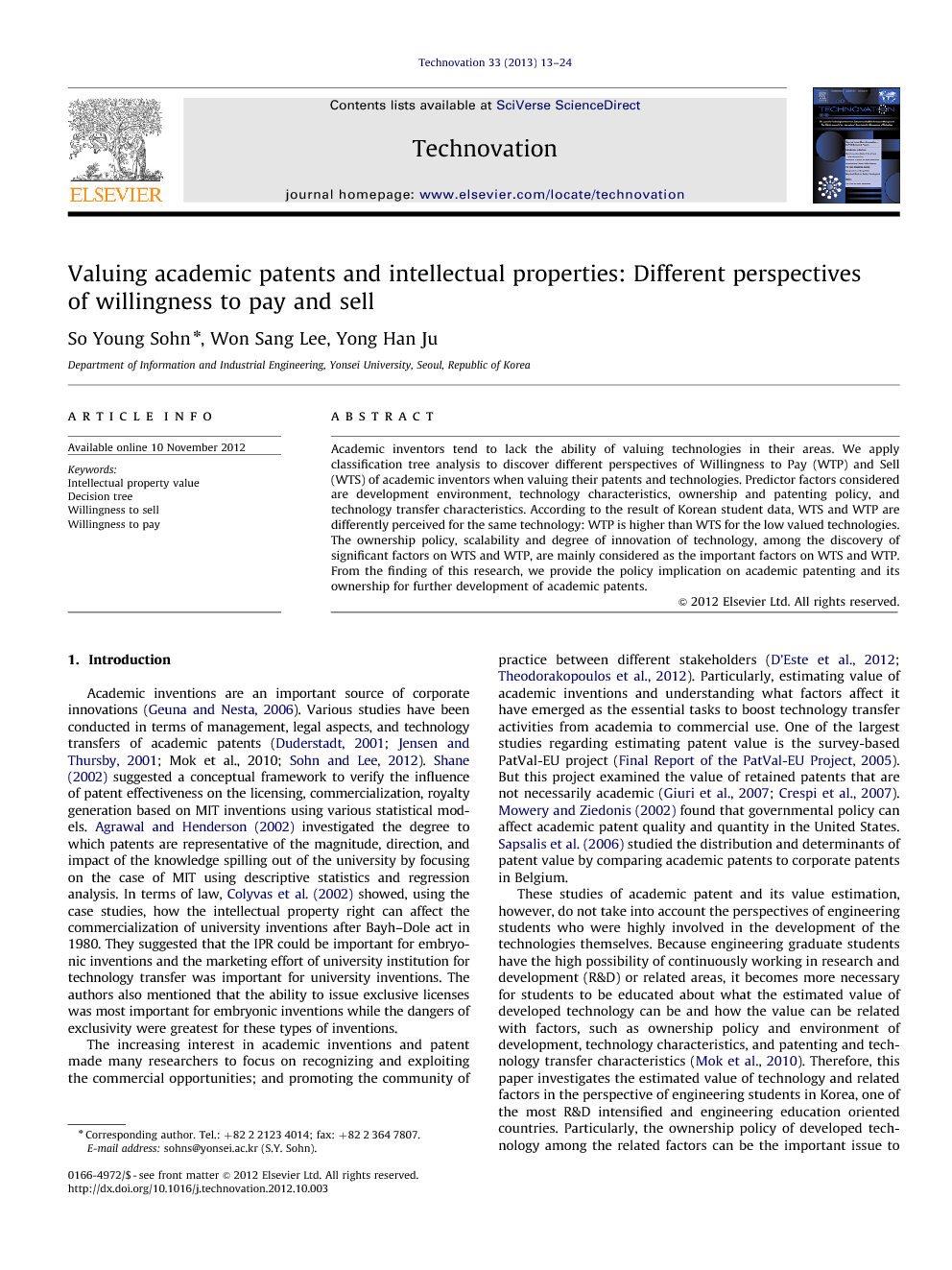 Academic inventors tend to lack the ability of valuing technologies in their areas. We apply classification tree analysis to discover different perspectives of Willingness to Pay (WTP) and Sell (WTS) of academic inventors when valuing their patents and technologies. Predictor factors considered are development environment, technology characteristics, ownership and patenting policy, and technology transfer characteristics. According to the result of Korean student data, WTS and WTP are differently perceived for the same technology: WTP is higher than WTS for the low valued technologies. The ownership policy, scalability and degree of innovation of technology, among the discovery of significant factors on WTS and WTP, are mainly considered as the important factors on WTS and WTP. From the finding of this research, we provide the policy implication on academic patenting and its ownership for further development of academic patents.

In this paper, we surveyed both the WTP and WTS of engineering graduate students in Korea for academic patents (technology), along with related variables. As a result, we discovered that WTS and WTP are perceived differently for the same technology. One interesting point is that WTP is higher than WTS when the estimated value of the developed technology is low. This result is not consistent with the general understanding that WTS is usually higher than WTP (Bockstael and McConnell, 1980). We discovered that values of WTS and WTP vary according to different academic majors. The value of WTS was highest in industrial engineering while the value of WTP was highest in material science and engineering. Bioengineering and material science and engineering have a smaller gap between WTS and WTP than other majors. Computer engineering has the lowest WTS and WTP. We found well-informed estimations of the market price of patents in material science and engineering and bioengineering, represented by the significantly small gap between WTS and WTP in these academic fields. We also examined if both WTS and WTP are associated with categories of ownership policy and environment of development, technology characteristics, and patenting and technology transfer characteristics. In terms of the technology ownership and environment category, perception of the usefulness of the teacher’s exception policy was positively related with WTS. The high possibility for expansion and a high uniqueness of technology positively influence WTS. In addition, the innovation level of technology is highly related to both WTS and WTP. In the case of patenting and technology transfer characteristics, the expected life of patent, type of ownership, and number of participating researchers in R&D have an effect on WTP. The results of DT analysis show that perceptions of the usefulness of the teacher’s exception policy are considered the single most important variable with regard to WTS, while possibilities of expansion to various technology sectors is the most important variable for WTP. In particular, rules 1–1 and 1–2 of the DT for WTS suggest that (1) if the teacher’s exception policy is considered useful, (2) if the possibility of expansion to various technology sectors is high, and (3) if the developed technology is at the innovation stage, then WTS is high. This result implies that the teacher’s exception policy should be introduced as an option for graduate student researchers at the universities surveyed for this study, and arguably to engineering graduate schools in general. Inventors are also required to develop a highly expandable technology in order to enhance the patent value. Decision tree analysis for WTP explains that if the possibility for expansion of relevant technology to various technology sectors is low, then WTP is low. Rule 2–4 of the DT for WTP also shows that (1) if the expansion possibility of relevant technology is high, and (2) patent ownership is granted to the developer or university, then WTP is high. Researchers should therefore consider scalability and ownership in the development of their technology. From the findings of this research, we suggest important areas for further investigation for academic patenting. First, it is necessary to further analyze the gap between WTS and WTP in terms of paired comparison. Based on the existence of inter-evaluator variability (Sohn et al., 2012), in this way, we expect to provide useful information in understanding the value of academic patents. Further analysis should be focused on three cases in particular: (1) WTS being higher than WTP, (2) WTS and WTP being of equal value, and (3) WTS being lower than WTP. In this study we found examples of WTS being lower than WTP when the estimated value of technological inventions is low, or in other words, when the market value is cheap. Second, it would be worthwhile to conduct a similar study in the corporate realm. It is critically important to consider the perspectives of corporations, which are the biggest purchasers of technology, when estimating the value of academic patents (technology) objectively. Third, we need to concentrate on the relationship between academic patent value and academic patenting policy, especially ownership policy that benefits the academic inventor. Fourth, it is necessary to conduct a cross-country survey to analyze the relationship between academic patent value and ownership policy by country. This would help us understand how ownership policy is related to patent value. Above all, creativity education for the researchers is needed to improve and induce innovative ideas for invention which can increase both WTS and WTP (Sohn and Jung, 2010 and Sohn and Ju, 2011). These areas are left for further research that can add valuable insight to the implications for academic patenting revealed in our study.