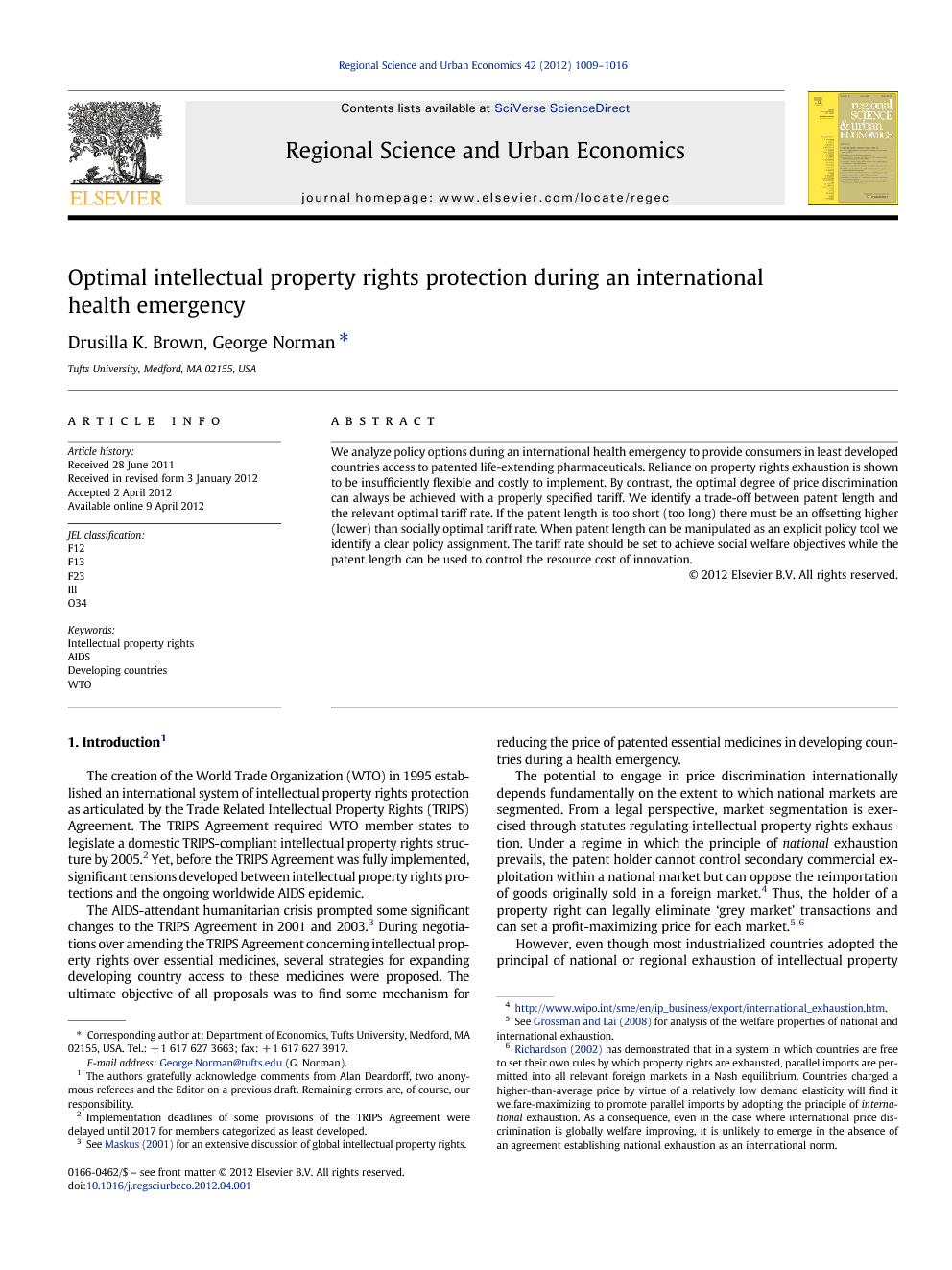 We analyze policy options during an international health emergency to provide consumers in least developed countries access to patented life-extending pharmaceuticals. Reliance on property rights exhaustion is shown to be insufficiently flexible and costly to implement. By contrast, the optimal degree of price discrimination can always be achieved with a properly specified tariff. We identify a trade-off between patent length and the relevant optimal tariff rate. If the patent length is too short (too long) there must be an offsetting higher (lower) than socially optimal tariff rate. When patent length can be manipulated as an explicit policy tool we identify a clear policy assignment. The tariff rate should be set to achieve social welfare objectives while the patent length can be used to control the resource cost of innovation.

The creation of the World Trade Organization (WTO) in 1995 established an international system of intellectual property rights protection as articulated by the Trade Related Intellectual Property Rights (TRIPS) Agreement. The TRIPS Agreement required WTO member states to legislate a domestic TRIPS-compliant intellectual property rights structure by 2005.2 Yet, before the TRIPS Agreement was fully implemented, significant tensions developed between intellectual property rights protections and the ongoing worldwide AIDS epidemic. The AIDS-attendant humanitarian crisis prompted some significant changes to the TRIPS Agreement in 2001 and 2003.3 During negotiations over amending the TRIPS Agreement concerning intellectual property rights over essential medicines, several strategies for expanding developing country access to these medicines were proposed. The ultimate objective of all proposals was to find some mechanism for reducing the price of patented essential medicines in developing countries during a health emergency. The potential to engage in price discrimination internationally depends fundamentally on the extent to which national markets are segmented. From a legal perspective, market segmentation is exercised through statutes regulating intellectual property rights exhaustion. Under a regime in which the principle of national exhaustion prevails, the patent holder cannot control secondary commercial exploitation within a national market but can oppose the reimportation of goods originally sold in a foreign market. 4 Thus, the holder of a property right can legally eliminate ‘grey market’ transactions and can set a profit-maximizing price for each market. 5, 6 However, even though most industrialized countries adopted the principal of national or regional exhaustion of intellectual property rights, patent-holders of antiretrovirals (ARVs) did not typically engage in price discrimination between industrialized and developing country markets in the early stages of the AIDS humanitarian crisis. To the extent that ARV patent holders initially provided medicines to low-income consumers in developing countries, the deliveries were characterized as humanitarian donations and made available at a zero price. AIDS activists gained leverage against patent holders following the 2001 Doha Ministerial and the 2003 Amendment to TRIPS Article 31. During the fourth WTO Ministerial (Doha, November 2001), members of the World Trade Organization (WTO) endorsed the use of TRIPS Article 31(b) which permits compulsory licensing of essential medicines for domestic purposes in the event of a national health emergency. Subsequently, prior to the Cancun Ministerial (2003), WTO members agreed to amend Article 31 to allow for the export of essential medicines produced under a compulsory license to other developing country trade partners.7 In the wake of revisions to the TRIPS Agreement, developing country governments could compel the patent holders of essential medicines to permit the reverse engineering and marketing of generic versions of ARVs. Thus, in essence, the WTO resolved the conflict between intellectual property rights protection and the AIDS driven humanitarian crisis by allowing developing countries to break the patent on ARVs. This raises the natural question, addressed in our analysis below, as to whether a market segmentation enforcement mechanism other than national exhaustion might have induced the ARV patent holders to supply developed and developing country markets. From the perspective of the patent holder, protecting price discrimination opportunities created through national exhaustion is costly. Pharmaceutical firms seeking to enforce market segmentation must exercise discipline over the supply chain through the use of batch numbers, bar coding, dating methods, differential packaging and litigation against patent violations by importers. The cost of policing international grey markets may not be offset by the small potential profits available in developing-country markets. Further, differential pricing in which the price paid in developing countries is publicly disclosed, reveals information to all customers concerning the firm's marginal cost and, thus, may adversely affect the outcome of bargaining between the patent-holder and customers in industrialized markets. From an economic efficiency perspective, an intellectual property rights regime of national exhaustion, which completely separates all national markets, might lead to more price discrimination than is socially optimal. Exhaustion is a binary policy tool. Therefore, the choice of exhaustion regime can facilitate a uniform international price or complete separation of markets. Intermediate results in which there is some international price dispersion but not profit-maximizing price discrimination cannot be supported by any exhaustion regime.8 This debate necessarily raises the question concerning how much price variation across countries is socially optimal and which policy tools can most efficiently facilitate optimal price dispersion. More preciously, can policy tools other than national exhaustion achieve efficiency-enhancing market separation? In light of the fact that intellectual property-rights protection is at least a second-best tool for promoting innovation (Deardorff, 1992), it is likely that some degree of tariff protection is socially optimal in the presence of global patent protection. This consideration leads us to investigate whether a tariff that separates national markets by penalizing re-exported products can be used to facilitate socially optimal price dispersion.9 We find that a tariff dominates national exhaustion for achieving optimal price dispersion and improves the efficiency properties of a patent for covering product development cost. The remainder of the paper is structured as follows. In Section 2 we briefly review the theoretical literature on the efficiency properties of international price dispersion. In Section 3, we consider the optimal tariff without development cost. In Section 4, we introduce the cost of R&D and jointly determine the optimal tariff regime and patent duration. Caveats and conclusions follow in Section 5.

This paper presents a simple model that is used to analyze the policy options available during an international health emergency. During the most intense phase of the humanitarian crisis related to the AIDS epidemic, the WTO elected to allow individual member states to choose between a principle of national, regional or international exhaustion of intellectual property rights. Developing countries were then permitted to break the patent using compulsory licensing with the option to export generic ARVs to least developing countries lacking production capacity. The decision to introduce compulsory licensing with an export option was a consequence of the failure of ARV patent holders to engage in price discrimination between industrialized and developing country markets. Rather, ARV patent holders chose to supply industrial country markets at the profit-maximizing price and to leave developing country markets largely unserved. Patent holders will engage in price discrimination only if the cost of maintaining market segmentation is lower than the profits available in the smaller market. Pharmaceutical companies seeking to enforce market segmentation must exercise discipline over the supply chain through the use of batch numbers, bar coding, dating methods, differential packaging and litigation against patent violations by importers. Such practices are costly and may not be offset by the very small profit opportunities in the developing countries most adversely affected by the AIDS epidemic. There is an important sense in which the use of compulsory licensing has been a successful strategy for providing developing countries access to ARVs at a price at or below marginal cost. Such an outcome is clearly a Pareto improvement over the equilibrium in which ARVs were sold at the monopoly price exclusively to industrialized country consumers. Further, offering ARVs priced at marginal cost to patients in developing countries had no effect on the price charged to patients in industrialized countries nor was there a decline in the resources available for future innovation and product development. It remains the case, however, that resort to compulsory licensing as a mechanism to provide essential medicines to developing countries constitutes a considerable abrogation of the intent of the TRIPS Agreement. Pharmaceutical patent holders have aggressively attempted to limit the use of compulsory licenses both during the negotiations prior to the 2003 Amendment to the TRIPS Agreement and subsequently in its application to second line AIDS medications (Mattson, 2007). The obstacles faced by developing countries seeking access to essential medicines necessarily raises the question as to whether the framers of the TRIPS Agreement adequately considered the humanitarian consequences of comprehensive intellectual property rights protection and the practicability of humanitarian safeguards built into the Agreement. Our analysis finds that the reliance on property rights exhaustion to achieve socially optimal price discrimination across national markets is costly to implement and insufficiently flexible. Rather, we show that the optimal degree of price discrimination can always be achieved with a properly specified tariff against re-exports no matter the convexity or concavity of demand. Further, the use of a tariff transfers most of the enforcement cost from the patent holder to the government, thus increasing the likelihood that firms will exploit profit opportunities created by segmented markets. When explicit account is taken of the role of innovation we find a trade-off between patent length and the relevant optimal tariff rate. Under the current TRIPS agreements, patent duration cannot discriminate by product category and, thus, cannot be made specific to the cost of innovation. As a result, statutory patent length may not coincide with the optimum for any particular class of inventions. We show that if the patent length is too short (too long) there must be an offsetting higher (lower) tariff rate than would otherwise be socially optimal. This implies that there is a possible welfare benefit from using patent length as an explicit policy tool during a national health emergency. When patent length can be manipulated as an explicit policy tool we identify a clear policy assignment. The tariff rate should be set to achieve social welfare objectives while the patent length can be used to control the resource cost of innovation. Finally, it is worth noting that the optimal tariff in the linear case provides for less price dispersion than will emerge if firms are allowed to engage in profit-maximizing price discrimination between N and E. As a consequence, even if firms enter with new varieties until profits just barely cover the cost of product development, profit-maximizing price discrimination does not approximate Ramsey pricing, as claimed by Danzon.