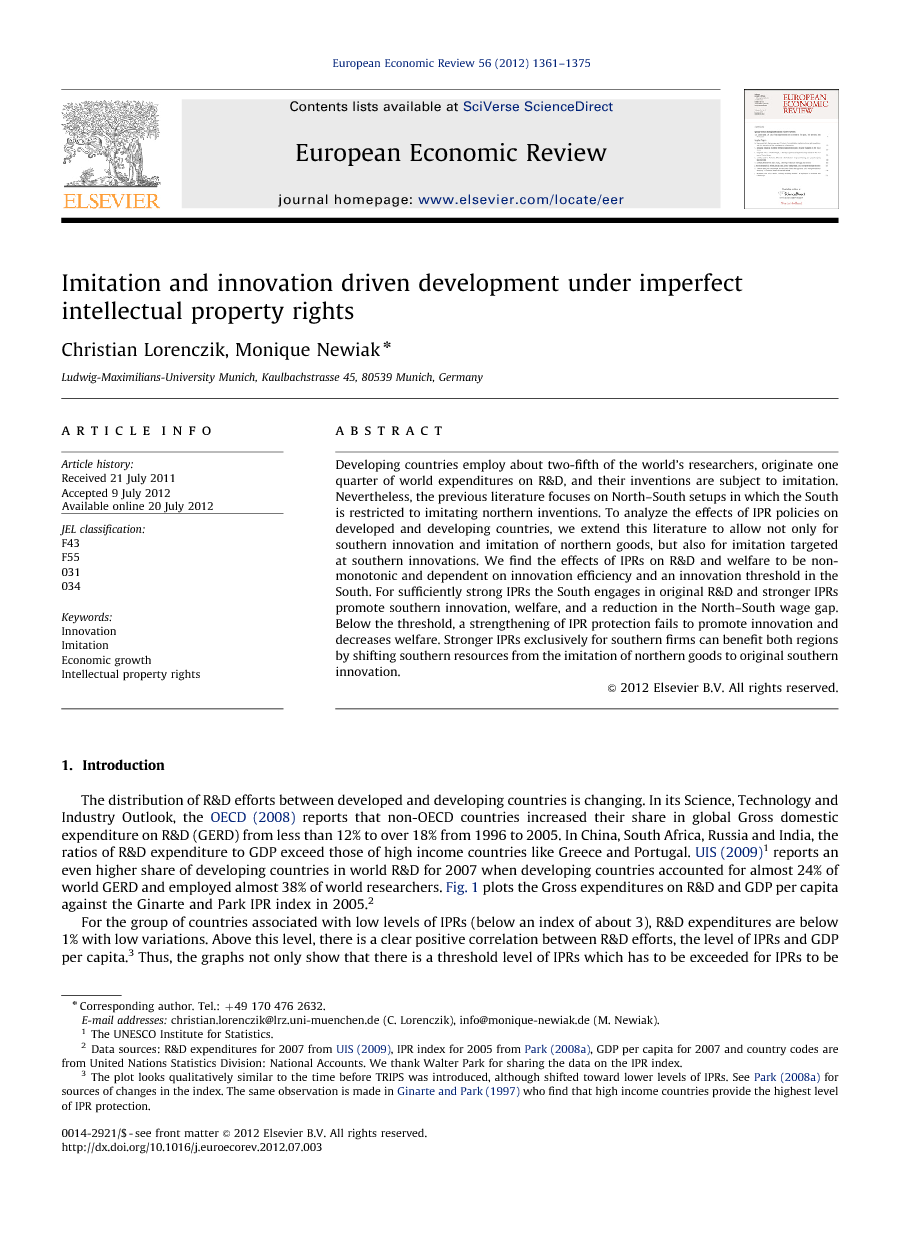 Developing countries employ about two-fifth of the world's researchers, originate one quarter of world expenditures on R&D, and their inventions are subject to imitation. Nevertheless, the previous literature focuses on North–South setups in which the South is restricted to imitating northern inventions. To analyze the effects of IPR policies on developed and developing countries, we extend this literature to allow not only for southern innovation and imitation of northern goods, but also for imitation targeted at southern innovations. We find the effects of IPRs on R&D and welfare to be non-monotonic and dependent on innovation efficiency and an innovation threshold in the South. For sufficiently strong IPRs the South engages in original R&D and stronger IPRs promote southern innovation, welfare, and a reduction in the North–South wage gap. Below the threshold, a strengthening of IPR protection fails to promote innovation and decreases welfare. Stronger IPRs exclusively for southern firms can benefit both regions by shifting southern resources from the imitation of northern goods to original southern innovation.

The distribution of R&D efforts between developed and developing countries is changing. In its Science, Technology and Industry Outlook, the OECD (2008) reports that non-OECD countries increased their share in global Gross domestic expenditure on R&D (GERD) from less than 12% to over 18% from 1996 to 2005. In China, South Africa, Russia and India, the ratios of R&D expenditure to GDP exceed those of high income countries like Greece and Portugal. UIS (2009)1 reports an even higher share of developing countries in world R&D for 2007 when developing countries accounted for almost 24% of world GERD and employed almost 38% of world researchers. Fig. 1 plots the Gross expenditures on R&D and GDP per capita against the Ginarte and Park IPR index in 2005.2 Full-size image (27 K) Fig. 1. R&D expenditures (GERD), IPRs, and GDP per capita. Figure options For the group of countries associated with low levels of IPRs (below an index of about 3), R&D expenditures are below 1% with low variations. Above this level, there is a clear positive correlation between R&D efforts, the level of IPRs and GDP per capita.3 Thus, the graphs not only show that there is a threshold level of IPRs which has to be exceeded for IPRs to be positively associated with R&D, but also that IPR protection is positively related to income only if the country has a sufficiently developed R&D sector.4 The theoretical literature typically divides the world into industrialized innovating countries (the North) and imitating developing countries (the South), but does not explain why these roles are assumed in the world economy.5 What is more, this separation does not account for the increasing investments into R&D in developing economies shown by the data and does not allow for a transition of imitator countries to become innovators as demonstrated by emerging countries like the Asian Growth miracles and earlier Japan. In this paper, we develop a North–South increasing variety model which allows for original innovation in both the North and the South, and also for the imitation of both northern and southern inventions. We show that our model can explain the IPR-R&D threshold level shown in Fig. 1, and determine the conditions under which IPRs can stimulate southern innovative activity and increase welfare. We then use the model to analyze the effects of different IPR policies in the South. The aspect of southern firms being subject to imitation has two main implications: First, stronger IPRs affect southern R&D incentives directly via their effect on imitation of southern innovations and indirectly via the profitability of northern varieties as imitation targets. Second, we can examine the effects of discriminatory IPR protection of northern or southern goods. While international treaties as the Paris and Berne Convention prescribe the national treatment principle, i.e. equally strong protection for domestic and foreign innovations, this principle may not be followed by developing countries. For instance, as Kumar (2003) describes for the case of Japan until the 1970s, IPR legislation might be in place to unilaterally advance domestic technology adoption from abroad. We find that southern innovative R&D takes place if IPRs surpass a critical threshold level. This critical level is lower for higher southern research efficiency and a larger southern population. This implies that large countries with efficient R&D sectors are likely to engage in innovation even under weak IPR regimes. Likewise, to encourage an inefficient R&D sector in a small country, IPRs have to be very strong. In stimulating southern original R&D, the protection of northern and the protection of southern innovations are shown to work as imperfect substitutes. If innovation takes place in the South, strengthening IPRs for both regions' innovators increases welfare in both regions. In contrast, an increase in IPRs that does not surpass the threshold level fails to stimulate innovation, increases the wage gap between the regions and decreases real consumption in the South. We show that a southern deviation from the national treatment principle in favor of domestic innovators does not harm either region if the South is not innovative and benefits both regions if the South engages in innovation: By increasing R&D incentives for southern firms, it shifts the southern attention away from the imitation of northern goods. The next section discusses the related literature, and Section 3 describes the model. We then describe the equilibrium and solve the model (Section 4), state the conditions under which the South engages in innovation (Section 5), and analyze the effects of different IPR policies on innovative and imitative activity and wages in the two regions (Section 6). In Section 7, the model is calibrated to analyze the welfare and employment effects of stronger IPRs, and Section 8 concludes.

This paper gives a theoretical explanation for the empirically observed threshold level of IPR protection in developing countries where property rights and research expenditures show a positive association only if the threshold is exceeded. The threshold derives from the optimizing behavior of firms for which an investment into innovation is only desirable if expected profits match alternative investments into imitation. We thus account for empirically observed increased R&D efforts by developing countries and extend the previous literature to allow for southern innovation as well as for imitation of southern inventions. The model nests the results of “standard” North–South models which do not allow for southern innovation: If IPRs are strengthened below the threshold level, then they fail to stimulate original R&D and decrease wages and welfare in the South. However, in accordance with the empirically observed patterns, we show that if IPRs surpass a critical level, they help to spur innovation in the South and increase welfare in both regions. The critical IPR level depends on the southern R&D efficiency and labor resources such that large countries or countries with a high research efficiency engage in innovation even under relatively weak protection. Likewise, to stimulate an inefficient R&D sector in a small country, IPRs have to be very strong. In setting its IPR policy, the model allows the South to deviate from the national treatment principle by discriminating between the strength of protection for northern and southern varieties. In determining the threshold, the protection of southern and northern innovations work as imperfect substitutes but operate through different channels: The protection of southern innovations affects expected profits from R&D directly while stronger protection of northern goods achieves this effect mainly by making the imitation of northern goods more expensive and thus raising the relative profitability of innovation investments. The simulation shows that an increase of IPRs exclusively for southern goods does not change the equilibrium outcome below the threshold. However, if the South engages in innovation, such a policy benefits both regions by increasing the southern innovation incentives and a shift of southern resources away from the imitation of northern goods. If national treatment is enforced, the South will suffer a welfare loss from higher IPR protection until the threshold is reached. Subsequent welfare gains might fall short of previous losses.