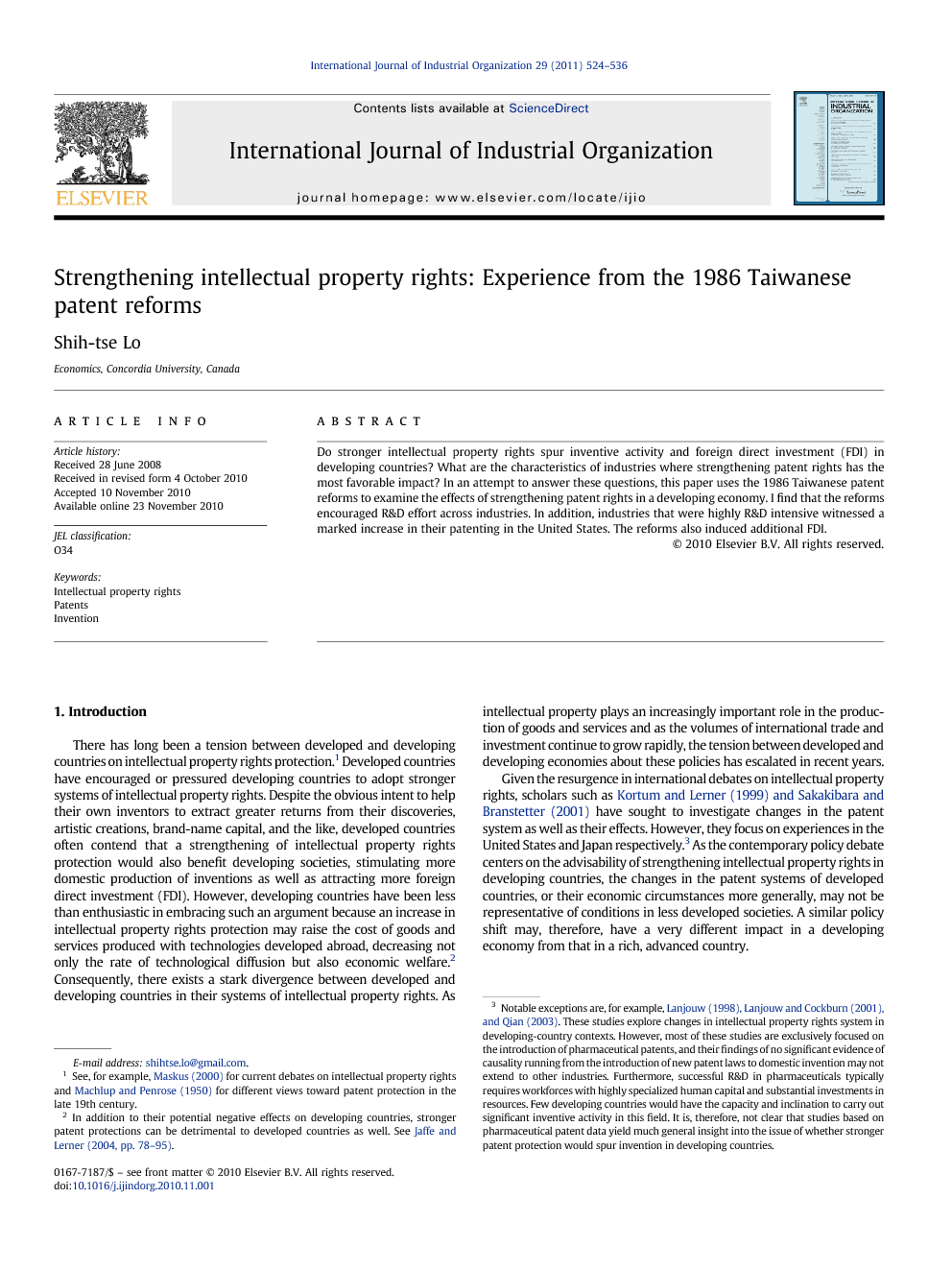 Do stronger intellectual property rights spur inventive activity and foreign direct investment (FDI) in developing countries? What are the characteristics of industries where strengthening patent rights has the most favorable impact? In an attempt to answer these questions, this paper uses the 1986 Taiwanese patent reforms to examine the effects of strengthening patent rights in a developing economy. I find that the reforms encouraged R&D effort across industries. In addition, industries that were highly R&D intensive witnessed a marked increase in their patenting in the United States. The reforms also induced additional FDI.

As the General Agreement on Tariffs and Trade and the World Trade Organization (WTO) require member countries to accept and adhere to the 1993 Trade Related Intellectual Property Agreement, in recent years developing countries have been restructuring their patent regimes to bring them more in line with those in industrialized countries. The primary motivation of developed countries, such as the United States, that have pushed for the so-called harmonization of intellectual property regimes has no doubt been in their own material interests. However, leaders of this recent policy trend toward strengthening patent protection argue that regardless of the background to the institutional change, stronger patent protection stimulates domestic inventive activity in developing countries — if not enhance social welfare more generally. Developing countries have generally reacted skeptically but have not always been able to stand up to the outside pressures. This paper has sought to improve our understanding of the impact of strengthening patent rights in a developing economy, by examining the effects of a change in the Taiwanese patent system, a change which was to a great extent compelled by pressure from the United States. The empirical evidence supports the idea that the 1986 Taiwanese patent reforms stimulated additional R&D spending in Taiwan. The new patent system also increased patenting in the United States by Taiwanese industries that generally made substantial investments in the generation of new technological knowledge, especially the electrical and electronic industry.44 In addition to the direct effects on domestic invention, there is evidence that the strengthening of patent rights induced more FDI in Taiwan. Several policy implications can be drawn from these findings. First, a stricter patent regime may benefit at least some developing countries by spurring inventive activity and encouraging FDI. However, the benefits from strengthening patent rights appear to vary across industries. The impact of a similar policy change may thus vary greatly by country, given each country's different industrial composition. As patent rights are based on national laws, cooperative efforts by industrialized countries to harmonize patent protection around the world may not be successful unless developing countries can also benefit. In order to resolve the conflict between innovative economies and technology net-importing countries, institutions such as the WTO and the World Intellectual Property Organization may need to address the ability of developing countries to create new technical knowledge before persuading them to institute stronger patent regimes.