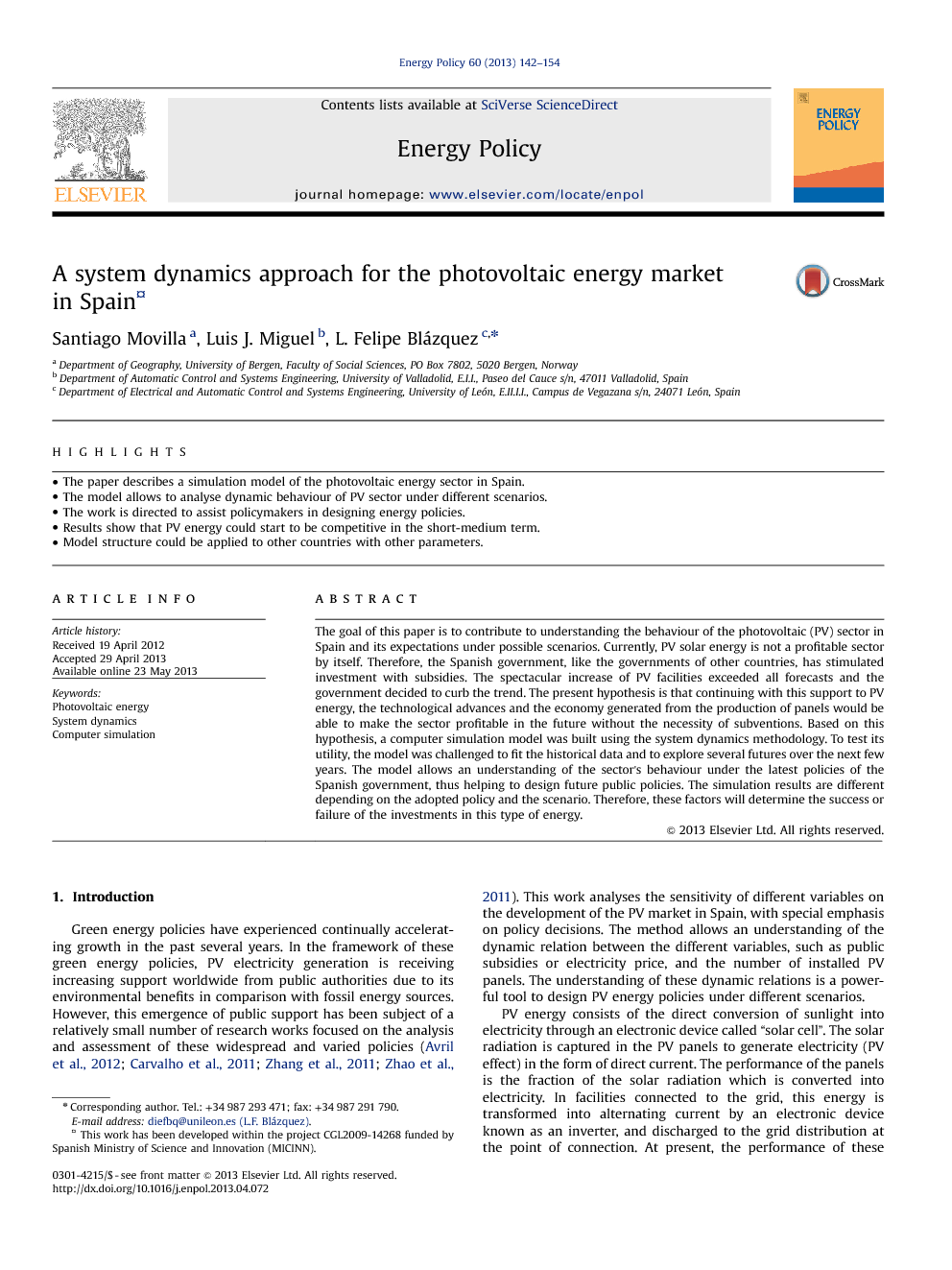 The goal of this paper is to contribute to understanding the behaviour of the photovoltaic (PV) sector in Spain and its expectations under possible scenarios. Currently, PV solar energy is not a profitable sector by itself. Therefore, the Spanish government, like the governments of other countries, has stimulated investment with subsidies. The spectacular increase of PV facilities exceeded all forecasts and the government decided to curb the trend. The present hypothesis is that continuing with this support to PV energy, the technological advances and the economy generated from the production of panels would be able to make the sector profitable in the future without the necessity of subventions. Based on this hypothesis, a computer simulation model was built using the system dynamics methodology. To test its utility, the model was challenged to fit the historical data and to explore several futures over the next few years. The model allows an understanding of the sector's behaviour under the latest policies of the Spanish government, thus helping to design future public policies. The simulation results are different depending on the adopted policy and the scenario. Therefore, these factors will determine the success or failure of the investments in this type of energy.

Green energy policies have experienced continually accelerating growth in the past several years. In the framework of these green energy policies, PV electricity generation is receiving increasing support worldwide from public authorities due to its environmental benefits in comparison with fossil energy sources. However, this emergence of public support has been subject of a relatively small number of research works focused on the analysis and assessment of these widespread and varied policies (Avril et al., 2012, Carvalho et al., 2011, Zhang et al., 2011 and Zhao et al., 2011). This work analyses the sensitivity of different variables on the development of the PV market in Spain, with special emphasis on policy decisions. The method allows an understanding of the dynamic relation between the different variables, such as public subsidies or electricity price, and the number of installed PV panels. The understanding of these dynamic relations is a powerful tool to design PV energy policies under different scenarios. PV energy consists of the direct conversion of sunlight into electricity through an electronic device called “solar cell”. The solar radiation is captured in the PV panels to generate electricity (PV effect) in the form of direct current. The performance of the panels is the fraction of the solar radiation which is converted into electricity. In facilities connected to the grid, this energy is transformed into alternating current by an electronic device known as an inverter, and discharged to the grid distribution at the point of connection. At present, the performance of these panels is very low (around 15%), which means that energy obtained in this way is not cost-effective as the cost of producing the panels is far greater than the value of their energy production throughout their useful lives. With the idea of developing this technology so that in the future it can be profitable, the Spanish government, like those of other nations, is betting strongly on this type of energy. The government is making it artificially profitable through the use of large subsidies paid according to the energy they produce and through encouraging the research and development of the sector in ways that someday, whether through the yield being higher or the costs of the components being lower, the sector can be competitive. Furthermore, the use of PV energy avoids the discharge of greenhouse gases to the atmosphere. As is well known, greenhouse gases can cause global warming and a rise of the planet's temperature with possible catastrophic consequences for human beings. In this respect, the Kyoto Protocol, in which Spain participates, sets emission limits for some member countries, which must pay fines for emitting excess tonnes. As for the emission of such gases, the energy sector occupies a very important place, because in Spain this sector is primarily responsible for emissions into the atmosphere, mainly due to the plants producing from thermal energy, such as coal, oil or natural gas. However, to account for the uncertainty and variability from solar energy, it is necessary to have additional flexible conventional generation capacity available in a power system with solar energy, to provide fast ramping capability. Hence, the production of electricity from PV panels not only does not pollute, but it also replaces some thermal energy, thus mitigating the discharge of CO2 to the atmosphere and avoiding the payments or fines for such emissions, since Spain is one of the countries that exceed emissions agreed by the Kyoto Protocol (Martínez et al., 2009). It is necessary to bear in mind that the energy required to construct a PV panel is very large because they are made of pure silicon, which is produced in ovens at high temperatures. However, a silicon solar panel with a regular purity can produce nearly ten times more energy than the energy used in its manufacture. This is because the energy needed to obtain silicon of regular purity is much lower with respect to that needed for a silicon cell of high purity, but the differences in PV energy production are not very significant. As estimated, a silicon solar cell has to be functioning between two and three years in order to “return” the energy used for its manufacture. This is assuming that the panel is installed in a relatively sunlit country. The research method to be used in this context is a computer simulation model of the main variables that have an influence on the PV market. The simulation model is based on the system dynamics approach (Forrester, 1961 and Sterman, 2000). The method has been previously used to model other energy systems with the purpose of being used for decision-making tools (Castro et al., 2009 and Mediavilla et al., 2013). The main idea consists of building a computer simulation model to reproduce the behaviour of such variables as the PV panel price, the evolution of the panel efficiency, the PV power installed, the subsidy value, the electricity price, the investments in PV energy, the payback period on investments, or the costs and yield of panels in general, over the last few years. The structure of the model is built according to the observed relations between the involved variables. The model has to replicate the historical data, explain the causes of the behaviour and how it is reproduced. The article is organised as follows: In Section 2 a literature review and the problem description are presented, where necessary background information to understand this problem is given. Section 3 describes the research method used in this work, where the process of using system dynamics is shown. Section 4 explains the conceptual model description. In Section 5 the simulation results are presented. Finally, Section 6 shows the conclusions of the work and some references are presented.

Although sustainable development policies have promoted PV energy in Europe, the behaviour of the PV energy market is affected by each national policy and other economic and technological variables. The analysis of the Spanish case may help to understand the dynamic behaviour of the PV energy market and, therefore, to design optimal policies. System dynamics have been shown to be an adequate tool to perform the modelling and simulation of this kind of problems to help decision-makers. The proposed model and its simulations contribute to a better understanding of the behaviour of the main variables of the PV energy market in Spain. The Spanish experience makes it possible to learn some lessons to be applied in other countries. The most important weakness of the sector is that, nowadays, the PV market still depends on subsidies to be profitable. In this sense, if the governments retire the PV support, the expected results are not very promising for this type of energy. In consequence, the success of the PV investments will depend on panel prices, but panel prices evolve according to technological development, which in turn is encouraged by PV purchases. However, if someone manages to find a breakthrough to overcome the technological barriers, PV energy could have a chance to play an important role in the electricity market in sunlit countries. The present research concludes that, considering current trends, PV energy could start to be competitive in the short term. Nevertheless, this waiting period is very sensitive to the adopted policy. Best results were obtained for continuous support with a limited profit margin, and gradual reduction according to PV development. Although the model was tested, some parts and parameters could be improved, it being the modeller himself who decides if the approximation is good enough according to the necessities of the project. In this sense, future lines of research could expand the model by obtaining new data.