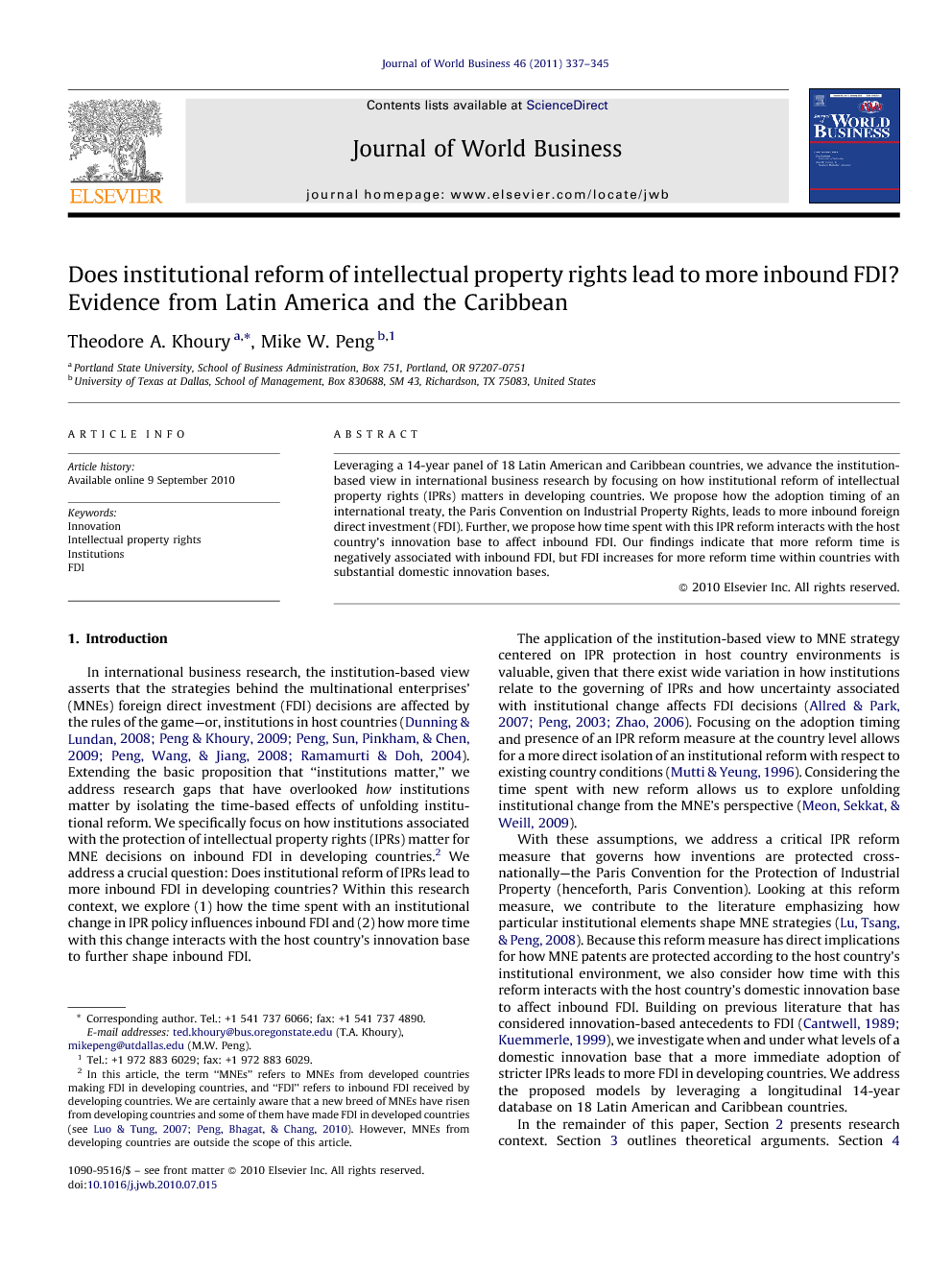 Leveraging a 14-year panel of 18 Latin American and Caribbean countries, we advance the institution-based view in international business research by focusing on how institutional reform of intellectual property rights (IPRs) matters in developing countries. We propose how the adoption timing of an international treaty, the Paris Convention on Industrial Property Rights, leads to more inbound foreign direct investment (FDI). Further, we propose how time spent with this IPR reform interacts with the host country's innovation base to affect inbound FDI. Our findings indicate that more reform time is negatively associated with inbound FDI, but FDI increases for more reform time within countries with substantial domestic innovation bases.

In international business research, the institution-based view asserts that the strategies behind the multinational enterprises’ (MNEs) foreign direct investment (FDI) decisions are affected by the rules of the game—or, institutions in host countries (Dunning and Lundan, 2008, Peng and Khoury, 2009, Peng et al., 2009, Peng et al., 2008 and Ramamurti and Doh, 2004). Extending the basic proposition that “institutions matter,” we address research gaps that have overlooked how institutions matter by isolating the time-based effects of unfolding institutional reform. We specifically focus on how institutions associated with the protection of intellectual property rights (IPRs) matter for MNE decisions on inbound FDI in developing countries. 2 We address a crucial question: Does institutional reform of IPRs lead to more inbound FDI in developing countries? Within this research context, we explore (1) how the time spent with an institutional change in IPR policy influences inbound FDI and (2) how more time with this change interacts with the host country's innovation base to further shape inbound FDI. The application of the institution-based view to MNE strategy centered on IPR protection in host country environments is valuable, given that there exist wide variation in how institutions relate to the governing of IPRs and how uncertainty associated with institutional change affects FDI decisions (Allred and Park, 2007, Peng, 2003 and Zhao, 2006). Focusing on the adoption timing and presence of an IPR reform measure at the country level allows for a more direct isolation of an institutional reform with respect to existing country conditions (Mutti & Yeung, 1996). Considering the time spent with new reform allows us to explore unfolding institutional change from the MNE's perspective (Meon, Sekkat, & Weill, 2009). With these assumptions, we address a critical IPR reform measure that governs how inventions are protected cross-nationally—the Paris Convention for the Protection of Industrial Property (henceforth, Paris Convention). Looking at this reform measure, we contribute to the literature emphasizing how particular institutional elements shape MNE strategies (Lu, Tsang, & Peng, 2008). Because this reform measure has direct implications for how MNE patents are protected according to the host country's institutional environment, we also consider how time with this reform interacts with the host country's domestic innovation base to affect inbound FDI. Building on previous literature that has considered innovation-based antecedents to FDI (Cantwell, 1989 and Kuemmerle, 1999), we investigate when and under what levels of a domestic innovation base that a more immediate adoption of stricter IPRs leads to more FDI in developing countries. We address the proposed models by leveraging a longitudinal 14-year database on 18 Latin American and Caribbean countries. In the remainder of this paper, Section 2 presents research context. Section 3 outlines theoretical arguments. Section 4 introduces empirical design. Section 5 reports empirical findings. Section 6 discusses the implications of our findings, our contributions, and limitations. Finally, Section 7 presents conclusions.

Drawing from a 14-year panel of 18 Latin American and Caribbean countries, this article advances theory in understanding how institutions, expressed by unfolding IPR policy reform, matter in developing countries. To further research on the institution-based view, this work untangles the connections between IPR reform via the participation in the Paris Convention and the inbound FDI effects. A crucial insight from this work is that IPR reform without a substantial domestic innovation base does not lead to more inbound FDI. Rather, more FDI is associated with the simultaneous presence of a large domestic innovation base and MNE-supportive IPR policies. With this finding, we challenge the prescriptions of IPR reform advocates in terms of the merit of reform in developing countries and the reform's intended economic consequences.