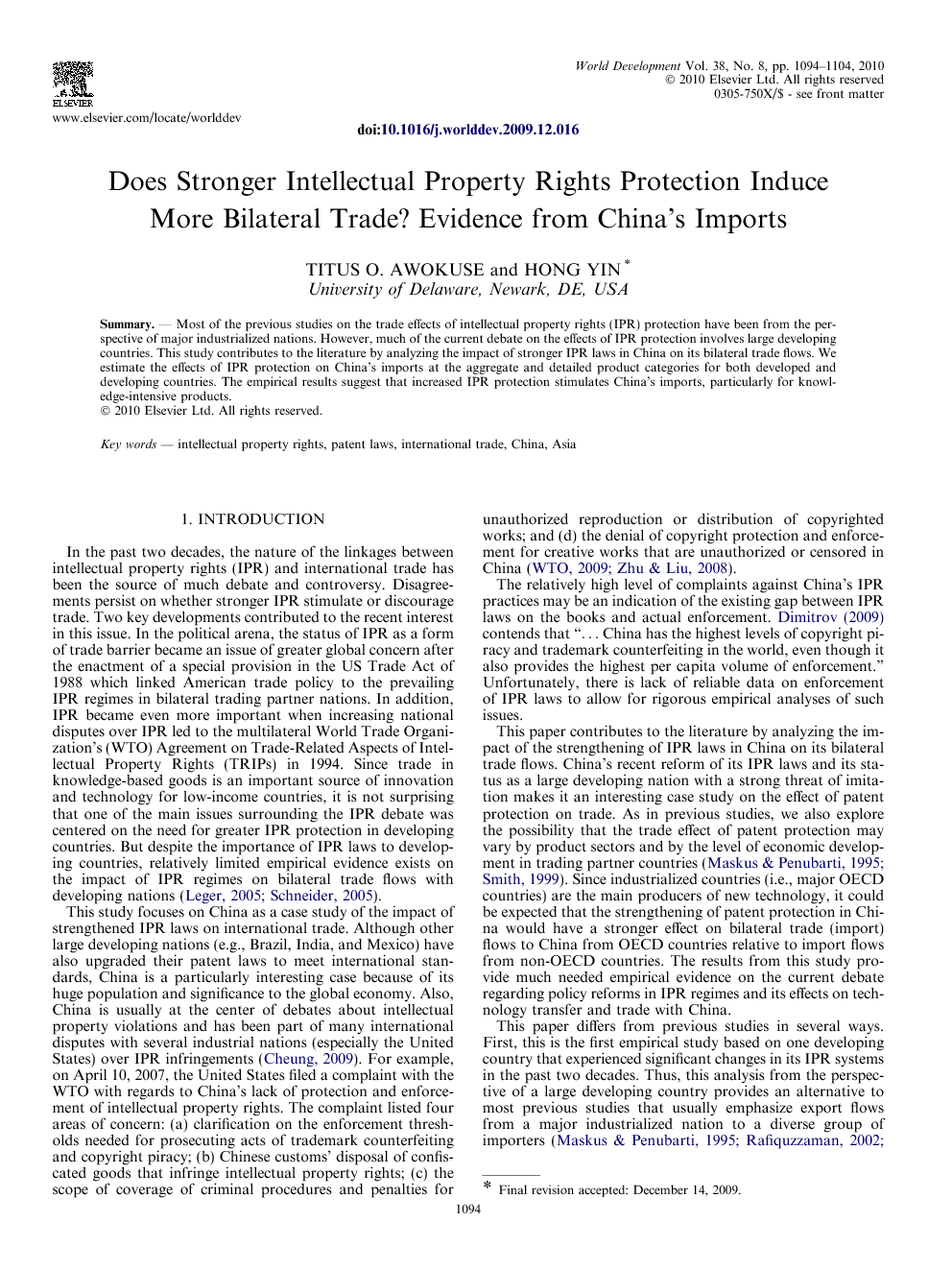 Most of the previous studies on the trade effects of intellectual property rights (IPR) protection have been from the perspective of major industrialized nations. However, much of the current debate on the effects of IPR protection involves large developing countries. This study contributes to the literature by analyzing the impact of stronger IPR laws in China on its bilateral trade flows. We estimate the effects of IPR protection on China’s imports at the aggregate and detailed product categories for both developed and developing countries. The empirical results suggest that increased IPR protection stimulates China’s imports, particularly for knowledge-intensive products.

Although several studies have investigated the effect of IPR protection on international trade from the perspective of major industrialized nations, to our knowledge, no previous analysis have examined this issue from the perspective of a developing nation with strong threat of imitation. In this study, we examine the impact of patent rights protection on China’s aggregate and sectoral imports. Specifically, the analysis provides empirical evidence for addressing these questions of interests: (1) to what extent does the effect of IPR protection vary across various manufacturing product sectors? (2) Does the impact of IPR protection differ between OECD (developed) and non-OECD (developing) countries? This analysis provides new insights on these empirical questions. The empirical results suggest that exporters respond positively to the strengthening of IPR laws in China. This finding further confirms the results from earlier studies that found evidence in support of the market expansion effect of stronger IPR protection in countries with strong threat of imitation. In general, our results show that the market expansion effect is more pronounced in knowledge-intensive sectors than in non-knowledge intensive sectors. Although the effects of IPR protection on technology-driven imports from OECD countries are positive and statistically significant, the evidence for non-OECD countries is relatively stronger for less patent-sensitive products. These results are consistent with the fact that OECD countries are the major producers of knowledge-based outputs and are the major exporters of patent-sensitive products. The impact of IPR policy in stimulating trade in China may have relevance for development policy in other large developing countries, especially those with increasing capacity in technology-intensive production. Given the diversity in size and economic structure of developing economies, our current empirical evidence for China should not be automatically generalized to all developing countries. Nevertheless, an important policy insight from this empirical analysis is that a large developing nation with strong threat of imitation could reap increased bilateral trade benefits from harmonizing and strengthening its IPR laws to conform to international standards as China has done in recent years. Future research would be beneficial in unraveling the complex interactions between trade, FDI, licensing and IPR protection. As more industry and firm level data become available, future analyses may be able to provide more definitive conclusions on the trade effects of IPR protection.