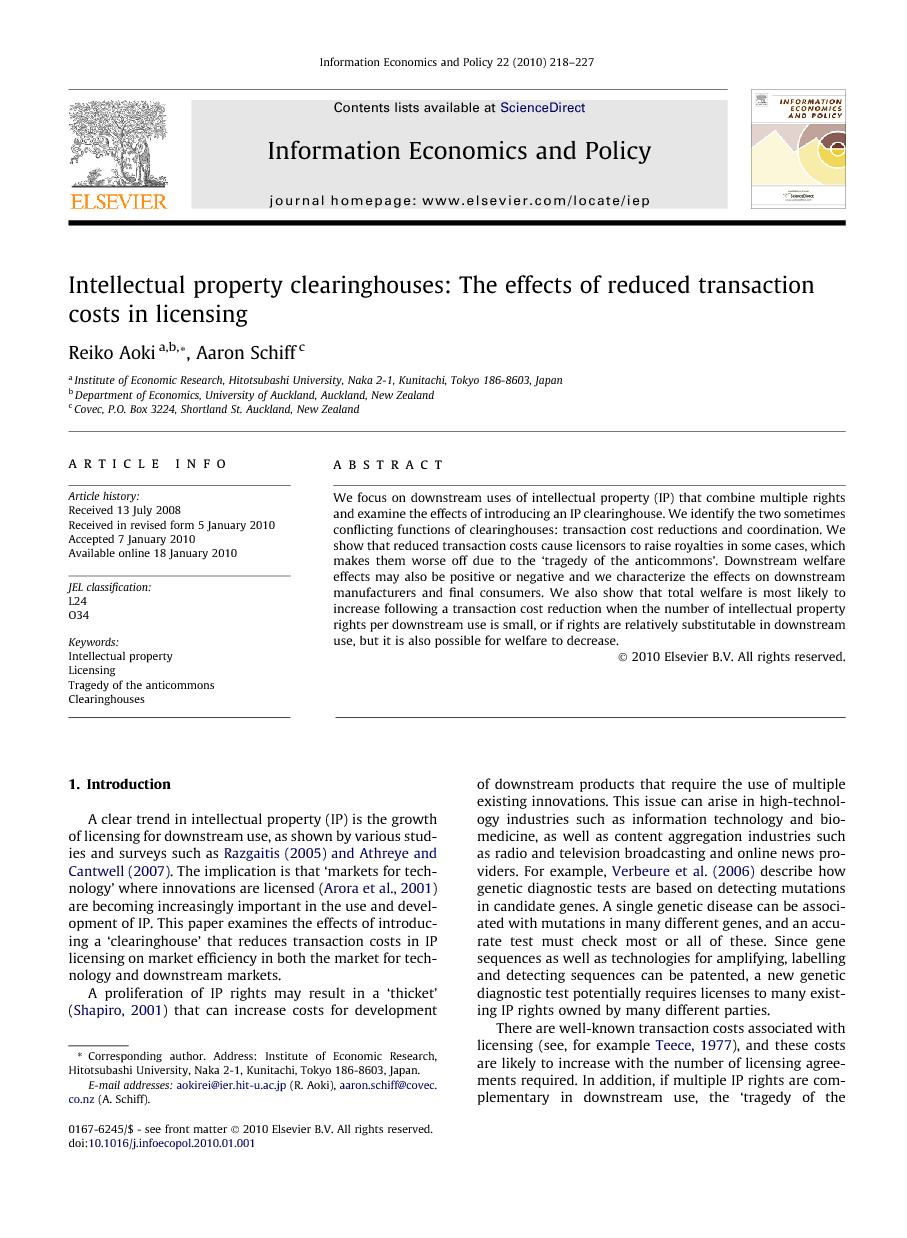 We focus on downstream uses of intellectual property (IP) that combine multiple rights and examine the effects of introducing an IP clearinghouse. We identify the two sometimes conflicting functions of clearinghouses: transaction cost reductions and coordination. We show that reduced transaction costs cause licensors to raise royalties in some cases, which makes them worse off due to the ‘tragedy of the anticommons’. Downstream welfare effects may also be positive or negative and we characterize the effects on downstream manufacturers and final consumers. We also show that total welfare is most likely to increase following a transaction cost reduction when the number of intellectual property rights per downstream use is small, or if rights are relatively substitutable in downstream use, but it is also possible for welfare to decrease.

In this paper we have used a simple model of IP licensing to examine the effects of a reduction in costs associated with the licensing process on royalties and welfare. Our motivation was a desire to understand how IP clearinghouses can affect markets for technology. We showed that non-cooperative royalty setting by IP owners can lead to the tragedy of the anticommons, and that considerations of downstream profitability can be a disciplining device to offset this. Therefore, a reduction in licensing costs can lead to negative welfare effects in some downstream markets that arise from higher equilibrium royalties, and this can make IP owners and consumers worse off. In some cases these negative effects can be sufficiently large to offset the gains from the introduction of new downstream products and reduced costs for manufacturers. This can be true both for individual markets and for aggregate welfare across markets. While our model uses some specific assumptions, we believe the qualitative results are robust to changes in the particular assumptions. The basic results come from two sources. First, IP owners have overlapping claims to a downstream product, and this results in a tendency to set excessive royalties if substitutability of rights is sufficiently low, which is exacerbated if there are more IP rights per downstream market. Second, there are transaction costs in licensing that bear on the downstream decision to obtain licenses, and which can affect the upstream strategic behavior of IP owners. These two things underpin the basic intuition developed in this paper, and similar effects could be obtained in alternative models with different assumptions. Our analysis was confined to modeling a reduction in fixed licensing costs that applied to all negotiations. We believe this is a useful first step in understanding the implications of IP clearinghouses, as it characterizes the full extent of the potential welfare implications of informational clearinghouses. An interesting next step for future research would be to characterize the demand by manufacturers and IP owners that a clearinghouse would face for its services. As we have seen, the welfare effects on IP owners are complex, and some IP owners may be unwilling to join a clearinghouse even if its services are provided for free. It would be useful to understand the implications of this for the profit-maximizing behavior of a third-party clearinghouse, and the consequences for welfare. We have also maintained the assumption that royalties are set independently by IP owners. In patent pools and copyright collectives, and under some possible clearinghouse models, royalties may be set centrally on behalf of IP owners. To the extent that this overcomes the tragedy of the anticommons and lowers royalties, it will be beneficial. However, as we have seen, non-cooperative royalties may not be excessively high if IP rights are sufficiently substitutable. It would be interesting to use our framework to examine the effects of centralized royalty setting, in comparison with the decentralized outcome, and determine the implications of centralization for the welfare effects of a reduction in the costs of the licensing process. A framework similar to that used in this paper could be used to compare the four different types of clearinghouse that we identified in terms of effects on welfare, and the factors that affect the demand for the services of each type.