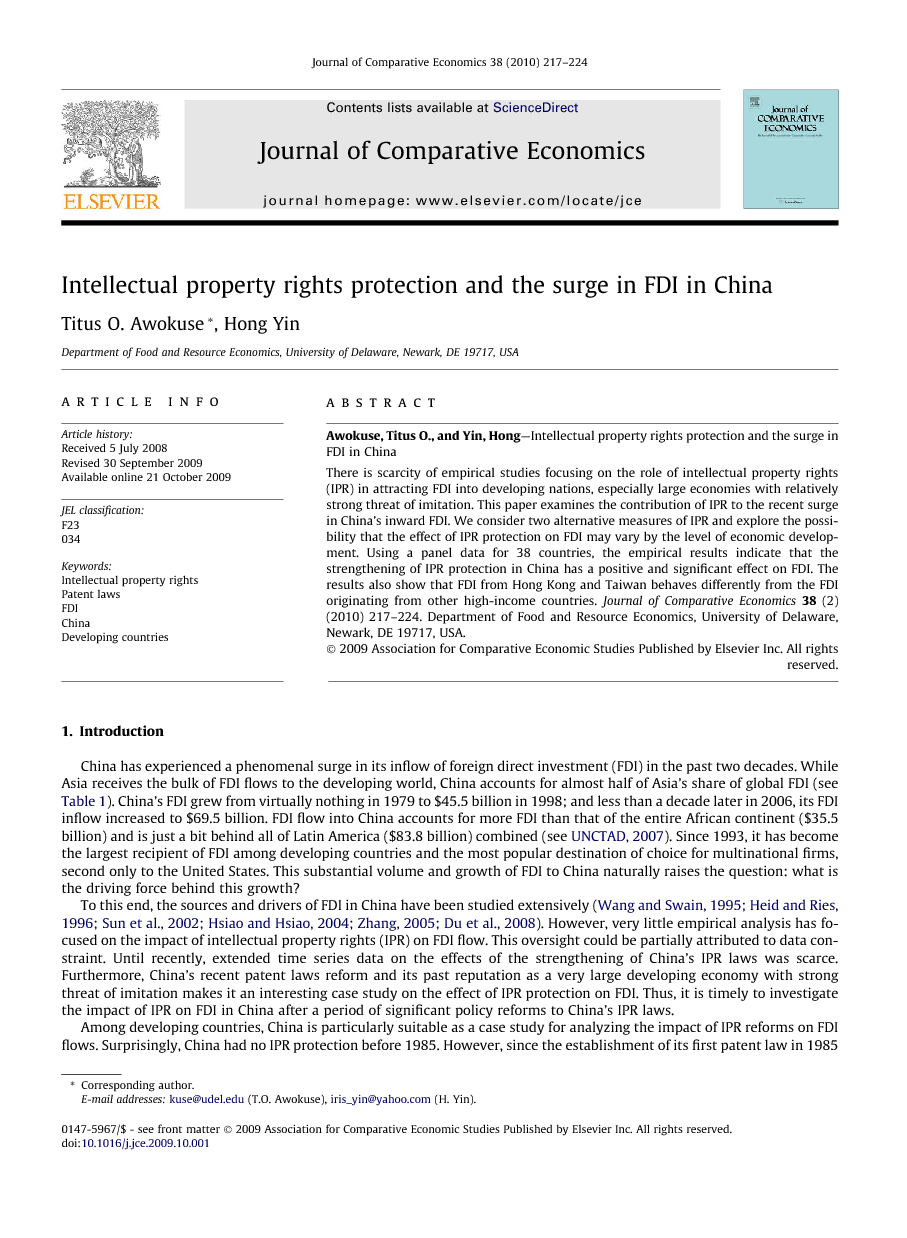 There is scarcity of empirical studies focusing on the role of intellectual property rights (IPR) in attracting FDI into developing nations, especially large economies with relatively strong threat of imitation. This paper examines the contribution of IPR to the recent surge in China’s inward FDI. We consider two alternative measures of IPR and explore the possibility that the effect of IPR protection on FDI may vary by the level of economic development. Using a panel data for 38 countries, the empirical results indicate that the strengthening of IPR protection in China has a positive and significant effect on FDI. The results also show that FDI from Hong Kong and Taiwan behaves differently from the FDI originating from other high-income countries.

China has experienced a phenomenal surge in its inflow of foreign direct investment (FDI) in the past two decades. While Asia receives the bulk of FDI flows to the developing world, China accounts for almost half of Asia’s share of global FDI (see Table 1). China’s FDI grew from virtually nothing in 1979 to $45.5 billion in 1998; and less than a decade later in 2006, its FDI inflow increased to $69.5 billion. FDI flow into China accounts for more FDI than that of the entire African continent ($35.5 billion) and is just a bit behind all of Latin America ($83.8 billion) combined (see UNCTAD, 2007). Since 1993, it has become the largest recipient of FDI among developing countries and the most popular destination of choice for multinational firms, second only to the United States. This substantial volume and growth of FDI to China naturally raises the question: what is the driving force behind this growth? Table 1. Overview of recent trends in global flow of FDI. Region/Country 1993–1998 (annual average) 1999 2000 2001 2002 2003 2004 FDI inflows (billions of dollar, current price) World 401.7 1092.1 1396.5 825.9 716.1 632.6 648.1 Developed economies 256.3 848.6 1134.0 596.3 547.8 442.2 379.8 Developing Economies 139.0 232.6 252.8 218.0 155.4 166.4 233.3 United State 86.1 283.4 314.0 159.5 71.3 56.8 95.9 Asia 83.4 111.6 145.7 108.6 92.0 101.3 147.5 China 38.5 40.3 40.7 46.9 52.7 53.5 60.6 Source: UNCTAD, World Investment Report 2005. Table options To this end, the sources and drivers of FDI in China have been studied extensively (Wang and Swain, 1995, Heid and Ries, 1996, Sun et al., 2002, Hsiao and Hsiao, 2004, Zhang, 2005 and Du et al., 2008). However, very little empirical analysis has focused on the impact of intellectual property rights (IPR) on FDI flow. This oversight could be partially attributed to data constraint. Until recently, extended time series data on the effects of the strengthening of China’s IPR laws was scarce. Furthermore, China’s recent patent laws reform and its past reputation as a very large developing economy with strong threat of imitation makes it an interesting case study on the effect of IPR protection on FDI. Thus, it is timely to investigate the impact of IPR on FDI in China after a period of significant policy reforms to China’s IPR laws. Among developing countries, China is particularly suitable as a case study for analyzing the impact of IPR reforms on FDI flows. Surprisingly, China had no IPR protection before 1985. However, since the establishment of its first patent law in 1985 and its substantial revision in 1992 and 2000, China has undergone a gradual reform of its patent systems. In 1992, mainly due to pressure from the United States, China’s patent law was substantially amended to make it more aligned with those of many industrial nations (Allison and Lin, 1999). The strengthening of China’s patent laws was also accelerated by its membership in the WTO that required that Chinese IPR laws (i.e. patents, copyrights and trademarks) be better aligned with the WTO’s Agreement on Trade-Related Aspects of Intellectual Property Rights (TRIPS) and other major international IPR conventions (Maskus, 2004). Since 1992, foreign patents have increased steadily with an annual growth rate of 19% (see Fig. 1). The majority of Chinese patents (invention patent applications) were filed by foreign firms with the most important patentees coming from Japan, the US, EU member countries, and South Korea. Full-size image (31 K) Fig. 1. Patent filings in China from 1985–2004. Source: Chinese patent database, CNPAT ABSDAT (http://www.sipo.gv.n). Figure options The objective of this paper is to investigate the impact of China’s IPR laws on its ability to attract FDI from 1992–2005. This paper contributes to the literature in several ways. First, this is the first empirical analysis focusing on a large and influential developing economy that has experienced significant changes in its IPR systems in the past two decades. Thus, this analysis provides an alternative to most previous studies that usually emphasize FDI flows from the perspective of a major industrialized parent-nation (e.g., United States) to a diverse group of host nations. Second, we also explore the possibility that the effect of IPR protection on FDI may vary by the level of economic development in partner countries (Smith, 2001). Third, in contrast to studies based on cross-sectional data from a single year, this study uses a panel data for 38 countries which covers a more extended time period (1992–2005) and allows for the consideration of the dynamic nature of the relationship between FDI and policy changes in IPR regimes. Fourth, this paper applies two alternative measures of IPR as a proxy for IPR regimes: (1) Annual foreign patent applications as a measure of the strength of IPR protection in China and (2) IPR index developed by Ginarte and Park (1997). The IPR index, used by most previous studies, is based on a scoring method that is often arbitrary in their choice of weights on the importance of various criteria. Although useful in some cases, the index-based measures of IPR, based on laws on the books, may not adequately capture the dynamic nature of the interaction between changes in patent laws and standards over time as well as their potential impact on other economic variables (e.g., FDI). Alternatively, we use actual data on the number of patent applications from parent countries over time. The growing number of foreign patents filed each year could be a good indicator of growing confidence of foreign firms in the IPR protection laws and enforcement offered in China. Relative to the index-based approach, this measure of IPR protection strength accounts for more variation across time and may be less susceptible to measurement errors. The main finding from this study suggests that the strengthening of IPR protection in China led to an increase in its FDI inflows. This paper’s empirical results further support the hypothesis that the strengthening of patent laws has a market expansion effect. Furthermore, our results also show that FDI from Hong Kong and Taiwan behaves differently from the FDI originating from other high-income countries. Thus, this study provides much needed empirical evidence on the current debate regarding policy reforms in IPR regimes and its effects on technology transfer and trade with China. The remainder of the paper is organized as follows. Section 2 contains a brief review of literature on the impact of IPR on trade and FDI. Section 3 describes the model specifications and data sources. The last two sections contain a discussion of results and the concluding remarks.

This paper examines the contribution of IPR protection to the recent surge in China’s inward flow of FDI. While several studies have investigated the impact of various factors as determinants of FDI into developing nations, the role of IPR has been relatively ignored. China is an interesting case study given its role as a major developing economy, which presents multinational firms with a strong threat of imitation. In its attempt to obtain membership in the WTO, China has experienced notable changes in its IPR systems in the past decade. Using a panel data for 38 diverse countries from 1992 to 2005, the empirical evidence suggests that the strengthening of IPR protection in China has a positive and significant effect in attracting FDI. In addition to IPR, the results also show that measures of market size, regional integration, and transportation and trade costs are important determinants of FDI in China. Furthermore, this result is robust to alternative model specifications and segmentation of the data sample. For instance, the positive effect of IPR on FDI is very significant irrespective of the measure of IPR adopted or whether FDI originates in a developed or developing nation. Overall, our results suggest that the strengthening of IPR in developing countries, particularly large economies, might play a positive role in attracting FDI and thus promote technology transfer. Another key result from this study is that the treatment of Hong Kong and Taiwan in the panel of countries is important. Our empirical evidence suggests that FDI from these two regions might be different from FDI originating in other high-income countries. It appears that “other factors” (e.g., ethnic and language similarities) beyond China’s large domestic market motivates such FDI flows. Some authors argue that the ethnic similarities and geographical proximity between Hong Kong, Taiwan and China are major determinants of FDI flows among these countries (Hsiao and Hsiao, 2004 and Zhang, 2005). This result also lends some support to the view that FDI from Hong Kong might contain substantial domestic components, or “transit FDI” (UNCTAD, 2001). Thus, future analysis of FDI in China should be careful in interpreting results from panel data that includes Hong Kong and Taiwan.