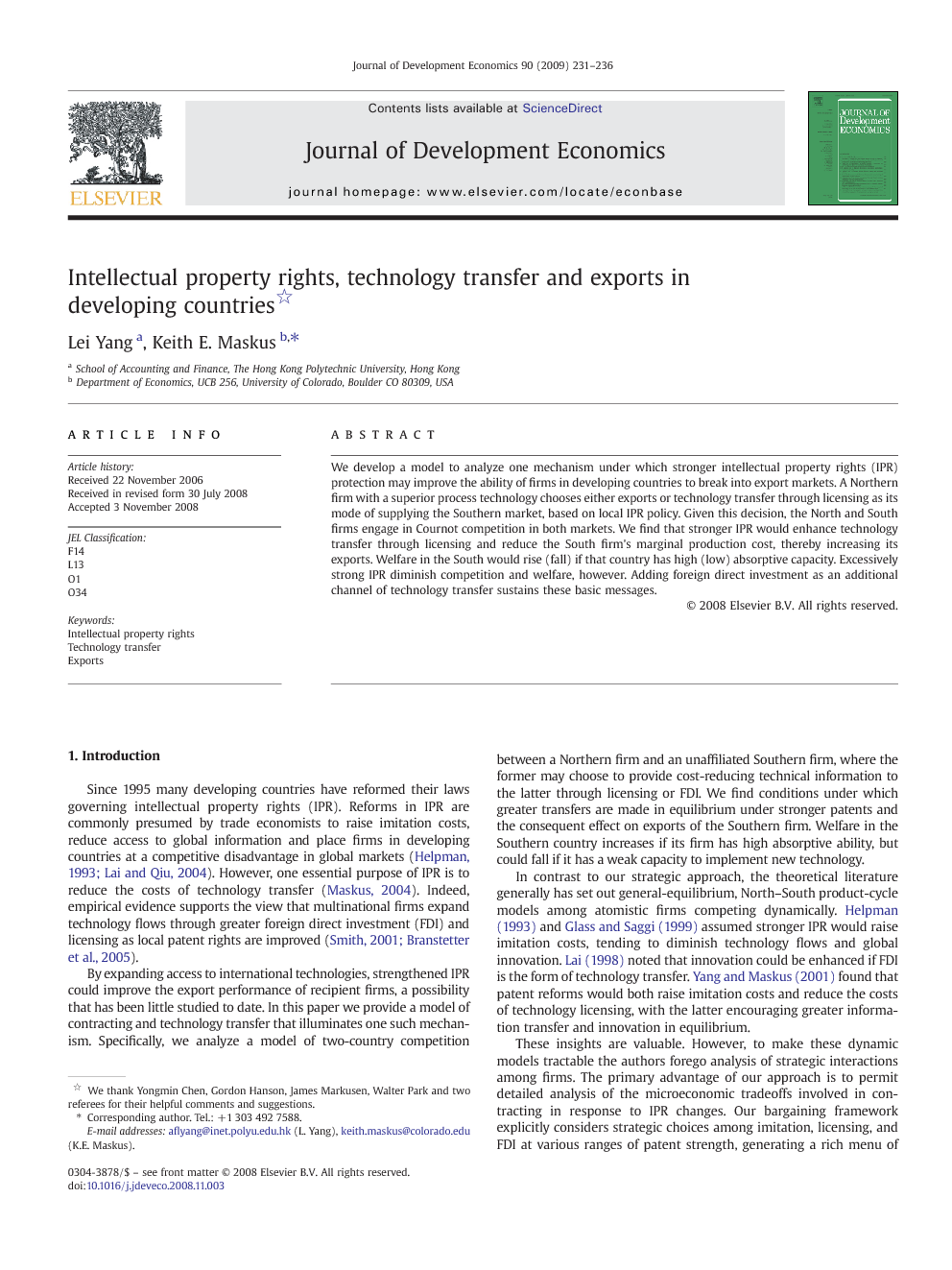 We develop a model to analyze one mechanism under which stronger intellectual property rights (IPR) protection may improve the ability of firms in developing countries to break into export markets. A Northern firm with a superior process technology chooses either exports or technology transfer through licensing as its mode of supplying the Southern market, based on local IPR policy. Given this decision, the North and South firms engage in Cournot competition in both markets. We find that stronger IPR would enhance technology transfer through licensing and reduce the South firm's marginal production cost, thereby increasing its exports. Welfare in the South would rise (fall) if that country has high (low) absorptive capacity. Excessively strong IPR diminish competition and welfare, however. Adding foreign direct investment as an additional channel of technology transfer sustains these basic messages.

Since 1995 many developing countries have reformed their laws governing intellectual property rights (IPR). Reforms in IPR are commonly presumed by trade economists to raise imitation costs, reduce access to global information and place firms in developing countries at a competitive disadvantage in global markets (Helpman, 1993 and Lai and Qiu, 2004). However, one essential purpose of IPR is to reduce the costs of technology transfer (Maskus, 2004). Indeed, empirical evidence supports the view that multinational firms expand technology flows through greater foreign direct investment (FDI) and licensing as local patent rights are improved (Smith, 2001 and Branstetter et al., 2005). By expanding access to international technologies, strengthened IPR could improve the export performance of recipient firms, a possibility that has been little studied to date. In this paper we provide a model of contracting and technology transfer that illuminates one such mechanism. Specifically, we analyze a model of two-country competition between a Northern firm and an unaffiliated Southern firm, where the former may choose to provide cost-reducing technical information to the latter through licensing or FDI. We find conditions under which greater transfers are made in equilibrium under stronger patents and the consequent effect on exports of the Southern firm. Welfare in the Southern country increases if its firm has high absorptive ability, but could fall if it has a weak capacity to implement new technology. In contrast to our strategic approach, the theoretical literature generally has set out general-equilibrium, North–South product-cycle models among atomistic firms competing dynamically. Helpman (1993) and Glass and Saggi (1999) assumed stronger IPR would raise imitation costs, tending to diminish technology flows and global innovation. Lai (1998) noted that innovation could be enhanced if FDI is the form of technology transfer. Yang and Maskus (2001) found that patent reforms would both raise imitation costs and reduce the costs of technology licensing, with the latter encouraging greater information transfer and innovation in equilibrium. These insights are valuable. However, to make these dynamic models tractable the authors forego analysis of strategic interactions among firms. The primary advantage of our approach is to permit detailed analysis of the microeconomic tradeoffs involved in contracting in response to IPR changes. Our bargaining framework explicitly considers strategic choices among imitation, licensing, and FDI at various ranges of patent strength, generating a rich menu of tradeoffs and welfare calculations that cannot readily be analyzed in the more general context. Of course, the partial-equilibrium Cournot context within which we operate also makes strong assumptions for tractability.1 Thus, we comment later on how the results would vary with alternative assumptions. Empirical evidence in several developing countries suggests that investing in technology is important for entering export markets (Hasan and Raturi, 2001). Key sources of such investment are imports of technology and linkages to multinational firms (Kumar and Siddharthan, 1993). However, this literature has paid little attention to the combination of IPR, technology transfer and trade in order to establish a linkage between IPR and exports. A recent exception is Branstetter et al. (2007), whose empirical analysis found an increase in export intensity of local affiliates of multinational firms after IPR policy changes. Again, none of these papers considered the detailed mechanisms under which IPR reforms could expand technology transfer and exports. As empirical motivation for our framework, within which patent reforms may encourage more technology transfer through unaffiliated licensing, with a subsequent boost to exports, consider two recent histories from East Asia. South Korea engineered a major strengthening of its patent laws from 1988 to 1995 (La Croix and Kawaura, 1996), increasing its measured patent index by 47%, from 2.65 to 3.89, between 1985 and 1995.2 Taiwan (Chinese Taipei) made substantial reforms in 1986 and 1994 (Diallo, 2003), raising its index by 152%, from 1.26 to 3.17, over the same period. South Korea's licensing payments to unaffiliated U.S. firms rose from $38 million in 1987 to $717 million in 1995, reaching $1.686 billion in 2005. Taiwan's licensing payments to unaffiliated U.S. firms rose from $17 million in 1986 to $267 million in 1996, reaching $1.165 billion in 2006. Finally, South Korea's merchandise exports rose from $28.5 billion in 1985 to $99.5 billion in 1995, reaching $284.4 billion in 2005. Taiwan's exports similarly rose from $33.4 billion in 1985 to $128.4 billion in 1995, reaching $223.7 billion in 2006.3

In this paper we developed a model of strategic competition to study the effects of stronger IPR protection in developing countries on their export performance, the mode of technology transfer and welfare. By reducing the Southern firm's marginal cost related to the degree of know-how absorbed, and also the cost of technology transfer, patent reforms could expand export opportunities. We found also that Southern welfare could rise with both IPR and absorptive capacity if S has relatively high bargaining power. This model is stylized but offers insights into means by which policymakers in developing countries might fashion their reforms in intellectual property. Specifically, stronger patent rights and trade secrets are likely to expand exports and improve welfare if domestic firms gain a more advanced ability to absorb and implement available international technologies. A complementary policy is to reduce the costs of establishing a subsidiary.