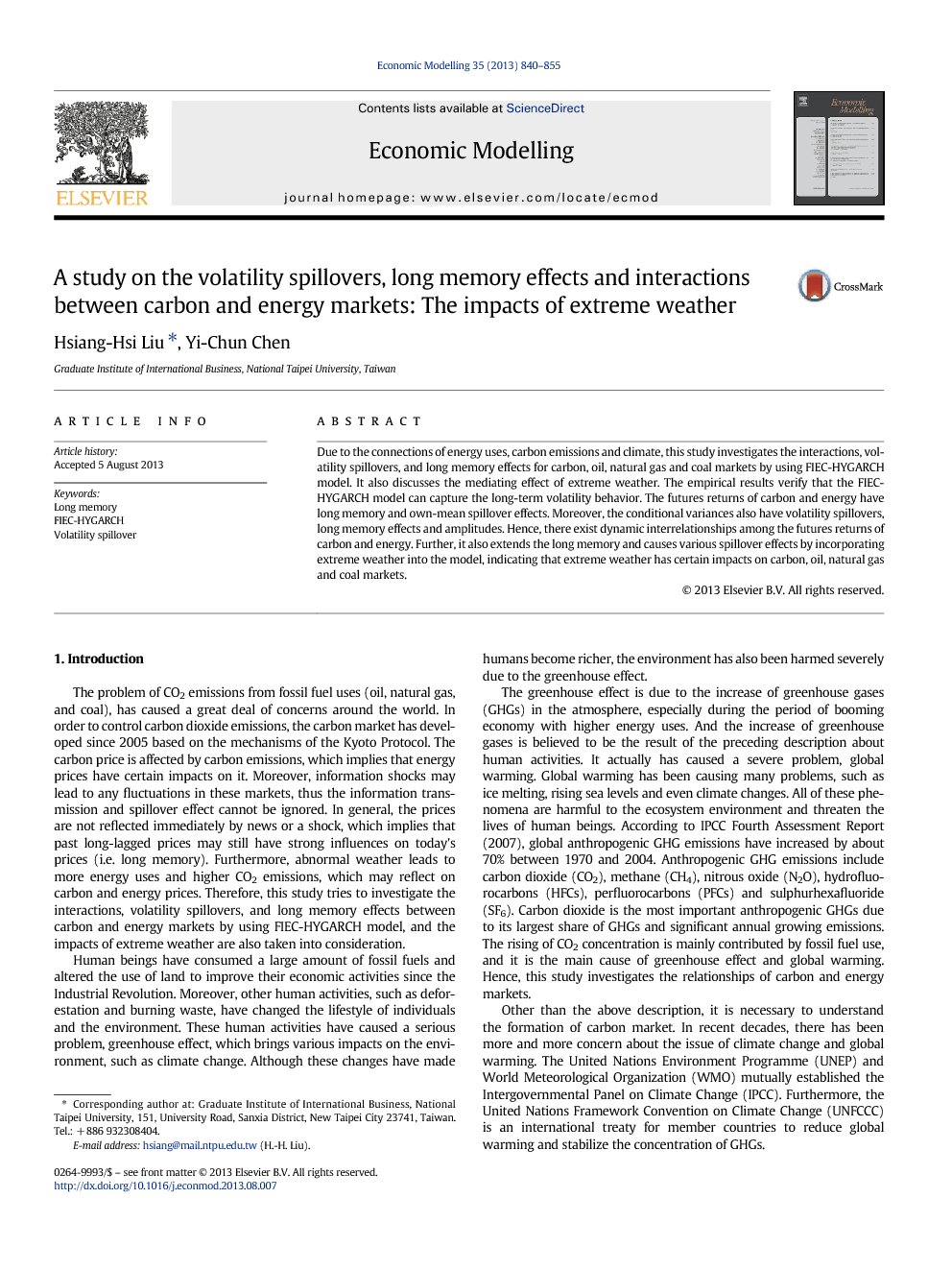 Due to the connections of energy uses, carbon emissions and climate, this study investigates the interactions, volatility spillovers, and long memory effects for carbon, oil, natural gas and coal markets by using FIEC-HYGARCH model. It also discusses the mediating effect of extreme weather. The empirical results verify that the FIEC-HYGARCH model can capture the long-term volatility behavior. The futures returns of carbon and energy have long memory and own-mean spillover effects. Moreover, the conditional variances also have volatility spillovers, long memory effects and amplitudes. Hence, there exist dynamic interrelationships among the futures returns of carbon and energy. Further, it also extends the long memory and causes various spillover effects by incorporating extreme weather into the model, indicating that extreme weather has certain impacts on carbon, oil, natural gas and coal markets.

Long memory in time series data means that current behavior is affected by past long-run behavior, reflecting a phenomenon of long-range dependency effect. We conclude that the long memory model adequately simulates the volatility of financial data, and therefore our study formulates a FIEC-HYGARCH model, incorporating a HYGARCH model into a fractionally integrated error correction (FIEC) model to analyze the interrelationships among the carbon, oil, natural gas and coal markets, and the impacts of extreme weather are also considered. The sample period of this study extends from January 1, 2008 to December 31, 2011. The empirical results have several findings as follows. Firstly, through analyzing the FIEC-HYGARCH models, the results show that there is a long memory effect, meaning that past information can be used to forecast future prices. Additionally, carbon and energy markets all have own-mean spillover effects, thus the investors and firms can use past prices to forecast the future prices, or even make appropriate strategies, such as to buy or sell the allowances of CO2 emissions. There also exists cross-spillover effects, so energy returns and extreme weather are essential for considering the carbon price changes. The results also indicate that carbon, oil, natural gas and coal returns all have long memory effects in their own markets, implying that past information can be used to forecast future volatilities. For the amplitude of volatility, carbon market has the largest volatility amplitude, and this may be resulted from its characteristic of relatively new market. To be more specific, carbon market is a relatively immature market that lacks the transparency of market information or may be easily affected by external factors, such as policy changes. Furthermore, extreme weather has significant impacts on carbon and coal markets, which may be resulted from the greater uses of heating and air-conditioning under extreme weather, leading to larger CO2 emissions. Carbon and energy markets also have covariance amplitudes and long memory effects, indicating that there exists long memory among these markets. This means that the covariance between two markets may be affected by their past events, and the returns may influence with each other and have the feature of time-varying. There are strong connections among carbon and energy markets in Europe. Investors should consider the performance of each market to diversify the investment portfolio risk and construct the advantageous investment and arbitrage portfolios when considering the carbon and/or energy (oil, natural gas and coal) futures as investment objects. Especially, for industrials firms, this study can provide clearer information for them to decide in buying or selling allowances of CO2 emissions. The government plays a crucial role in providing related information of risk and establishing appropriate policies. When the market becomes more transparent, investors can reduce market risk to a certain extent. Last but not the least, it needs to be mentioned that the empirical results obtained from the collected data and developed models required considering the environment and the time frame in which the research take place. When using the results of this research, one ought to bear in mind that business environments are subject to frequent and constant fluctuations. Thus, changes need to be taken into account in order to gain more realistic conclusion.