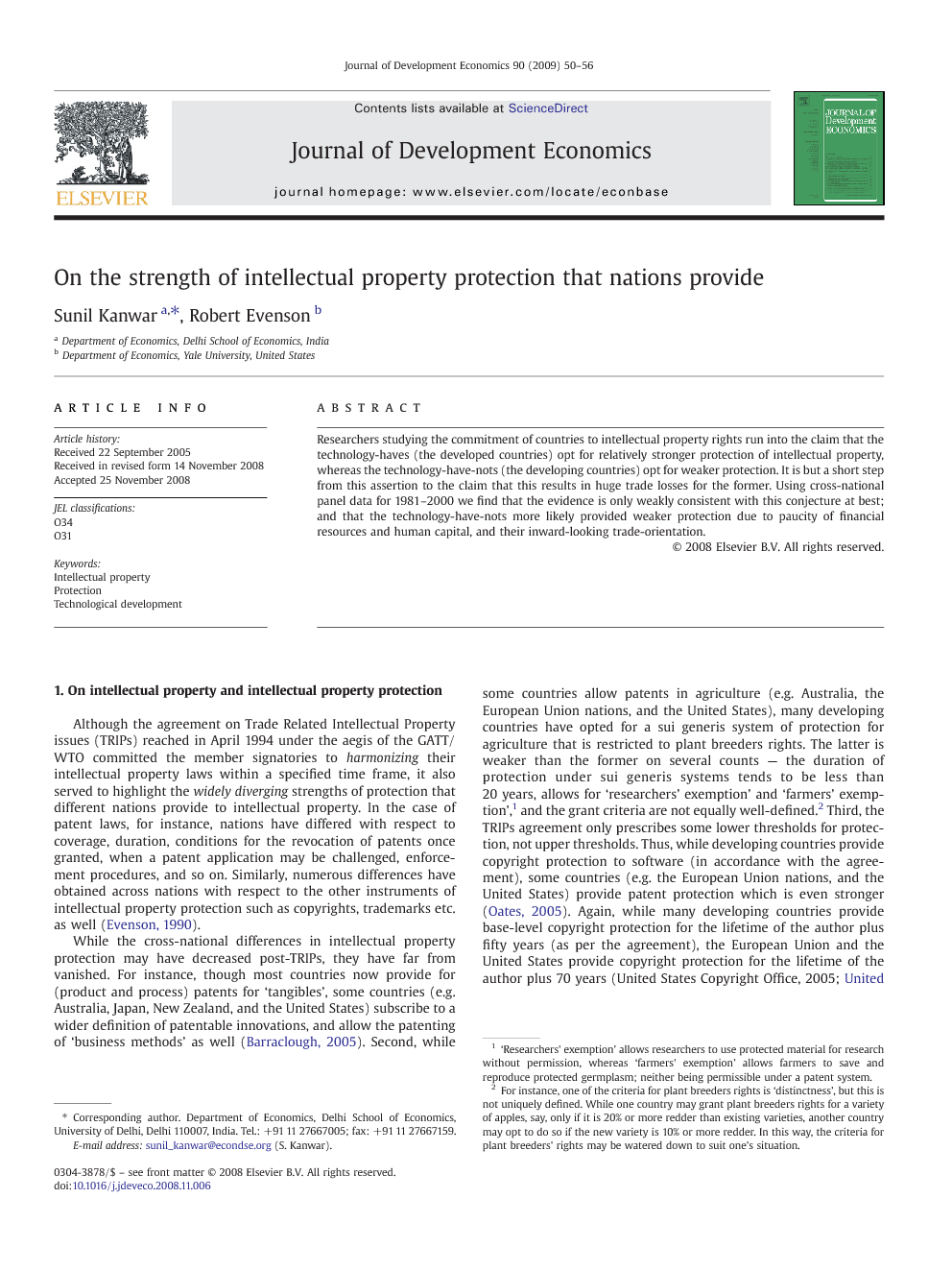 Researchers studying the commitment of countries to intellectual property rights run into the claim that the technology-haves (the developed countries) opt for relatively stronger protection of intellectual property, whereas the technology-have-nots (the developing countries) opt for weaker protection. It is but a short step from this assertion to the claim that this results in huge trade losses for the former. Using cross-national panel data for 1981–2000 we find that the evidence is only weakly consistent with this conjecture at best; and that the technology-have-nots more likely provided weaker protection due to paucity of financial resources and human capital, and their inward-looking trade-orientation.

Although the agreement on Trade Related Intellectual Property issues (TRIPs) reached in April 1994 under the aegis of the GATT/WTO committed the member signatories to harmonizing their intellectual property laws within a specified time frame, it also served to highlight the widely diverging strengths of protection that different nations provide to intellectual property. In the case of patent laws, for instance, nations have differed with respect to coverage, duration, conditions for the revocation of patents once granted, when a patent application may be challenged, enforcement procedures, and so on. Similarly, numerous differences have obtained across nations with respect to the other instruments of intellectual property protection such as copyrights, trademarks etc. as well ( Evenson, 1990). While the cross-national differences in intellectual property protection may have decreased post-TRIPs, they have far from vanished. For instance, though most countries now provide for (product and process) patents for ‘tangibles’, some countries (e.g. Australia, Japan, New Zealand, and the United States) subscribe to a wider definition of patentable innovations, and allow the patenting of ‘business methods’ as well (Barraclough, 2005). Second, while some countries allow patents in agriculture (e.g. Australia, the European Union nations, and the United States), many developing countries have opted for a sui generis system of protection for agriculture that is restricted to plant breeders rights. The latter is weaker than the former on several counts — the duration of protection under sui generis systems tends to be less than 20 years, allows for ‘researchers’ exemption’ and ‘farmers’ exemption’,1 and the grant criteria are not equally well-defined.2 Third, the TRIPs agreement only prescribes some lower thresholds for protection, not upper thresholds. Thus, while developing countries provide copyright protection to software (in accordance with the agreement), some countries (e.g. the European Union nations, and the United States) provide patent protection which is even stronger (Oates, 2005). Again, while many developing countries provide base-level copyright protection for the lifetime of the author plus fifty years (as per the agreement), the European Union and the United States provide copyright protection for the lifetime of the author plus 70 years (United States Copyright Office, 2005; United Kingdom Government, 2005). Last but not the least (for many other cross-national differences may be discerned upon scrutiny), countries differ markedly in terms of the enforcement of intellectual property rights. Researchers studying different countries' commitment to intellectual property protection often run into the claim, that countries with a relatively higher technological base (the developed countries) have an incentive to provide relatively stronger protection to intellectual property, whereas countries with a relatively lower technological base (the developing countries) have little incentive to do so. While this possibility has been acknowledged in the literature, few researchers have studied it formally. Of these few, McLeland and O'Toole's (1987) analysis is limited to the assertions that the “... LDC perspective is different primarily because there are few research-based pharmaceutical companies located in those countries”, and that “[M]ost indigenous manufacturers are compounders who purchase the active ingredient ... and mix and package the drug ...”. The authors do not offer any evidence on these sweeping statements — how true this might be for, say, Argentina, Brazil, Cuba, India etc; or whether their claims pertain to other industries as well.3Frame (1987) considers a group of countries with a ‘low’ commitment to protect intellectual property, and claims that United States trade losses on account of inadequate protection and trade in counterfeit goods run into several billions of dollars, but does not explicitly show that the latter phenomenon (of some countries supposedly benefiting by providing weak protection to others' intellectual property) is linked to the former set of countries. Ginarte and Park (1997) study the strength of protection countries provide by using lagged values of the possibly endogenous causal variable (namely, research and development spending) in lieu of the variable itself, but do not provide any test for the presence of endogeneity bias. Lerner (2002) deviates from the earlier studies by analysing the determinants of specific aspects of patent laws rather than composite indices of protection. The strength of protection granted by nation states, however, is determined by the sum total of the different aspects of their intellectual property laws, and not by the individual characteristics per se; for some aspects such as the length of protection may substitute for others such as the breadth of protection. Therefore, ideally, an analysis of the determinants of specific aspects of protection should be presented alongside that of protection as a whole. It appears, then, that the empirical evidence on the issue is thin and not supportive of any generalisation, and would benefit from further enquiry. This paper examines empirically whether technological development leads to the strengthening of laws pertaining to its protection. This relationship is captured at the economy-wide level, employing cross-country data on the strength of intellectual property protection, level of technological development and other country-specific control variables. Using plausible instruments, we attempt to control for endogeneity bias and obtain consistent estimates of the relationship. Although Hausman endogeneity tests reject the presence of any significant endogeneity bias, we nevertheless present the IV results alongside the OLS results as the two are fairly similar. In the case of the IV specification, the test of over-identifying restrictions is found to be consistent with exogeneity of the instruments. Our estimation results show that the level of technological development has, at best, only a weak positive influence on the strength of intellectual property protection provided by nations; rather, it is access to financial resources and human capital, and trade orientation, that explain the level of protection nations provide. Section 2 considers the underlying arguments in greater detail and spells out the estimating regression. Section 3 discusses the empirical results, and Section 4 outlines the broad conclusions.

We find, at best, weak evidence in support of the claim that the strength of intellectual property protection that nations provide varies positively with their level of technological development. This is interesting in view of the fact that intellectual property laws are not an economic variable exclusively determined by market forces; rather, most important laws – including those relating to intellectual property – are often the result of long drawn out debate not just by the area experts, but also the executive, the judiciary and sundry other members of the polity. Laws, therefore, are slow to change. Over longer time spans, however, they do appear to respond to changes in the level of technological development. It may be too cynical, nevertheless, to ascribe the entire response in the strength of protection to vested interests on the part of the technology-have-nots. While it may be true that developing nations offer weaker protection for potential gain, our results underline the possibility that their lack of financial capital and human capital may be behind their inability to do so. Further, relatively open economies appear to be under greater pressure to provide stronger property rights in their effort to stay competitive, and few developing countries were open prior to the globalization forces of the 1990s.