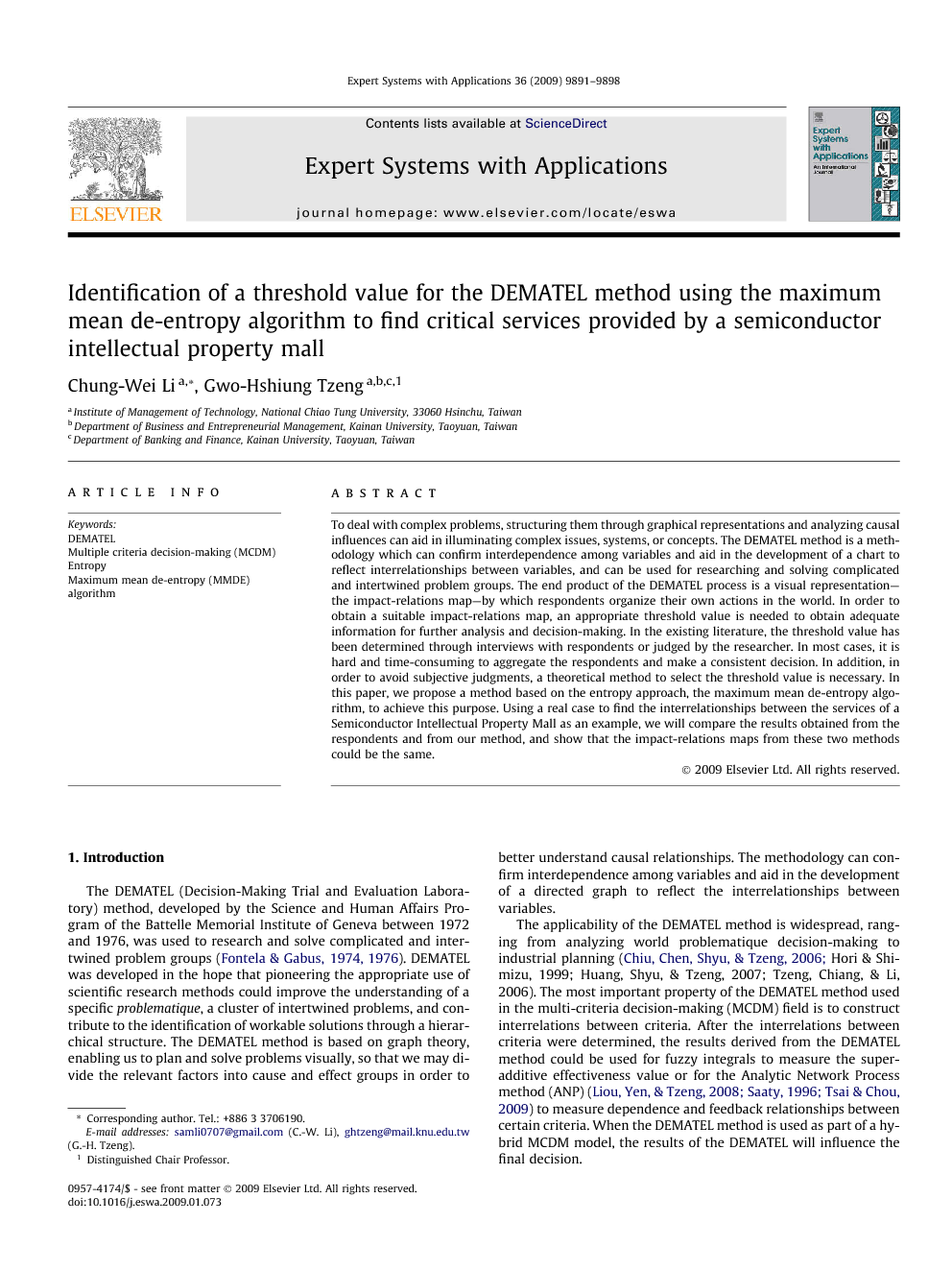 To deal with complex problems, structuring them through graphical representations and analyzing causal influences can aid in illuminating complex issues, systems, or concepts. The DEMATEL method is a methodology which can confirm interdependence among variables and aid in the development of a chart to reflect interrelationships between variables, and can be used for researching and solving complicated and intertwined problem groups. The end product of the DEMATEL process is a visual representation—the impact-relations map—by which respondents organize their own actions in the world. In order to obtain a suitable impact-relations map, an appropriate threshold value is needed to obtain adequate information for further analysis and decision-making. In the existing literature, the threshold value has been determined through interviews with respondents or judged by the researcher. In most cases, it is hard and time-consuming to aggregate the respondents and make a consistent decision. In addition, in order to avoid subjective judgments, a theoretical method to select the threshold value is necessary. In this paper, we propose a method based on the entropy approach, the maximum mean de-entropy algorithm, to achieve this purpose. Using a real case to find the interrelationships between the services of a Semiconductor Intellectual Property Mall as an example, we will compare the results obtained from the respondents and from our method, and show that the impact-relations maps from these two methods could be the same.

The DEMATEL (Decision-Making Trial and Evaluation Laboratory) method, developed by the Science and Human Affairs Program of the Battelle Memorial Institute of Geneva between 1972 and 1976, was used to research and solve complicated and intertwined problem groups (Fontela and Gabus, 1974 and Fontela and Gabus, 1976). DEMATEL was developed in the hope that pioneering the appropriate use of scientific research methods could improve the understanding of a specific problematique, a cluster of intertwined problems, and contribute to the identification of workable solutions through a hierarchical structure. The DEMATEL method is based on graph theory, enabling us to plan and solve problems visually, so that we may divide the relevant factors into cause and effect groups in order to better understand causal relationships. The methodology can confirm interdependence among variables and aid in the development of a directed graph to reflect the interrelationships between variables. The applicability of the DEMATEL method is widespread, ranging from analyzing world problematique decision-making to industrial planning (Chiu et al., 2006, Hori and Shimizu, 1999, Huang et al., 2007 and Tzeng et al., 2006). The most important property of the DEMATEL method used in the multi-criteria decision-making (MCDM) field is to construct interrelations between criteria. After the interrelations between criteria were determined, the results derived from the DEMATEL method could be used for fuzzy integrals to measure the super-additive effectiveness value or for the Analytic Network Process method (ANP) (Liou et al., 2008, Saaty, 1996 and Tsai and Chou, 2009) to measure dependence and feedback relationships between certain criteria. When the DEMATEL method is used as part of a hybrid MCDM model, the results of the DEMATEL will influence the final decision. There are four steps in the DEMATEL method: (1) calculate the average matrix, (2) calculate the normalized initial direct-influence matrix, (3) derive thetotal relation matrix, and (4) set a threshold value and obtain the impact-relations map (in Fig. 1, we divided Step 4 into two steps). In Step 4, an appropriate threshold value is necessary to obtain a suitable impact-relations map as well as adequate information for further analysis and decision-making. The traditional method followed to set a threshold value is conducting discussions with experts. The researcher sets an adequate threshold value and then outlines an impact-relations map to discuss whether the impact-relations map is suitable for the structure of the problematique. If not, the threshold value is replaced by another value, and another impact-relations map is obtained until there is a consistent opinion among the majority. Sometimes, after the researcher obtains the input data for Step 1 using questionnaires, it is difficult to choose a consistent threshold value, especially if there are too many experts to aggregate at the same time. When the factors of the problem are many, the work involved in obtaining a consistent threshold value becomes more complex. In order to obtain a reasonable threshold value with respect to difficulty in the discussions with experts, the researcher may choose the value subjectively. The results of the threshold values may differ among different researchers. Full-size image (17 K) Fig. 1. The steps of the DEMATEL method. Figure options In contrast to the traditional method, which confronts the loop from a “set a threshold value” to obtain “the needed impact-relations map”, as shown in Fig. 1, we propose the maximum mean de-entropy (MMDE) algorithm to obtain a threshold value for delineating the impact-relations map. This algorithm based on the entropy approach can be used to derive a set of dispatch-nodes, the factors which strongly dispatch influences to others, and a set of receive-nodes, which are easily influenced by another factor. According to these two sets, a unique threshold value can be obtained for the impact-relations map. In the numerical example, a real case is used to discover and illustrate the key services needed to attract Semiconductor Intellectual Property Mall (SIP) users and SIP providers to an SIP Mall. Research in the current study enabled the derivation of the interrelated services and their structural interrelationships using the DEMATEL method, where the threshold value is selected through discussions with experts. By using the proposed MMDE algorithm to choose the threshold value, both impact-relations maps from the traditional method and the algorithm we propose are the same, although the procedures are different. The rest of this paper is organized as follows: Section 2 briefly describes the DEMATEL method. The steps of the maximum mean de-entropy algorithm will be described, explained, and discussed in Section 3. In Section 4, a numerical example, a real case where the goal is to find out the interrelated services that should be provided by a semiconductor intellectual properties mall and the structural interrelationship between them, is shown in order to explain the proposed algorithm and discuss the results. Finally, in Section 5, we draw conclusions.