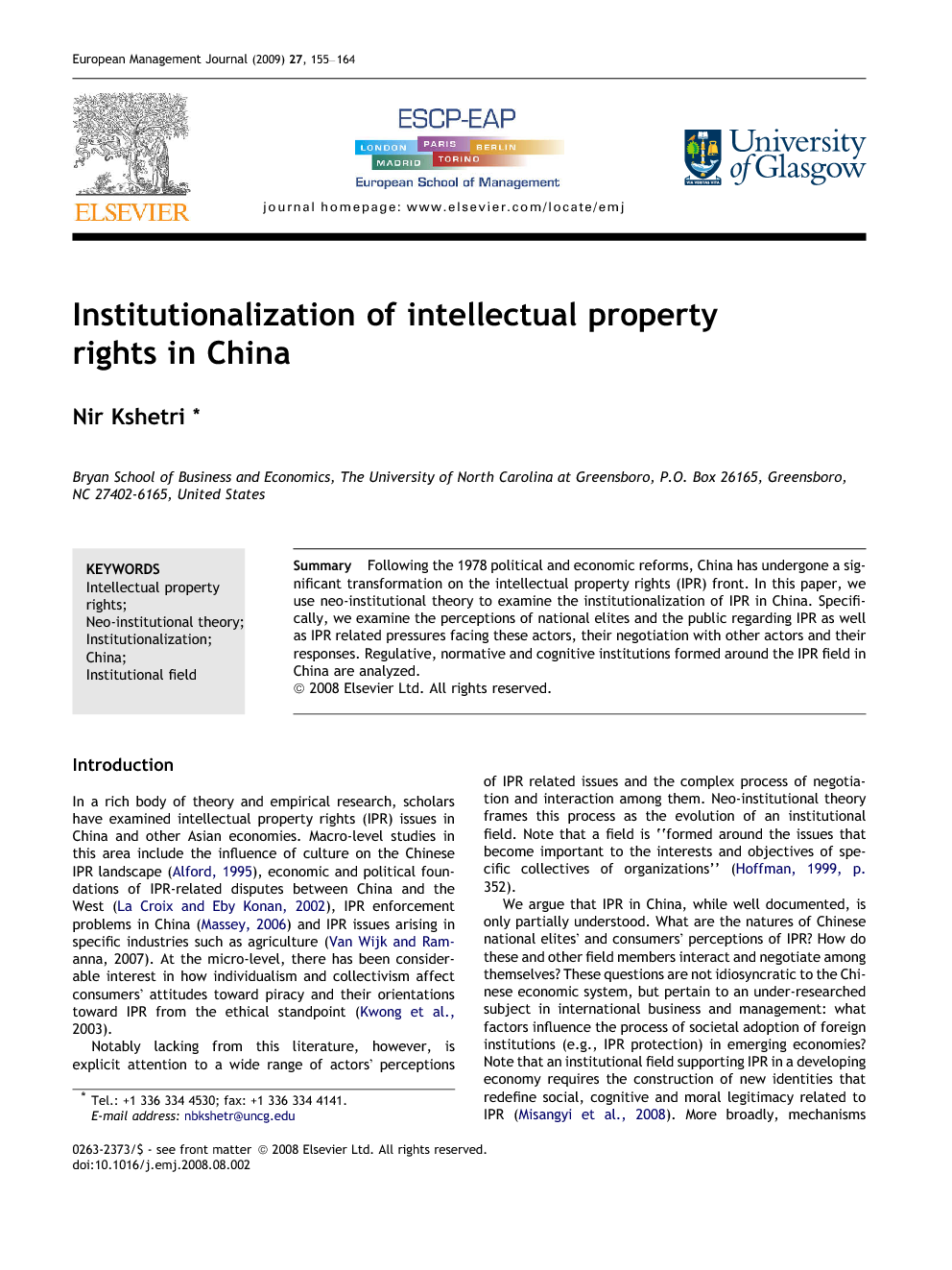 Following the 1978 political and economic reforms, China has undergone a significant transformation on the intellectual property rights (IPR) front. In this paper, we use neo-institutional theory to examine the institutionalization of IPR in China. Specifically, we examine the perceptions of national elites and the public regarding IPR as well as IPR related pressures facing these actors, their negotiation with other actors and their responses. Regulative, normative and cognitive institutions formed around the IPR field in China are analyzed.

In a rich body of theory and empirical research, scholars have examined intellectual property rights (IPR) issues in China and other Asian economies. Macro-level studies in this area include the influence of culture on the Chinese IPR landscape (Alford, 1995), economic and political foundations of IPR-related disputes between China and the West (La Croix and Eby Konan, 2002), IPR enforcement problems in China (Massey, 2006) and IPR issues arising in specific industries such as agriculture (Van Wijk and Ramanna, 2007). At the micro-level, there has been considerable interest in how individualism and collectivism affect consumers’ attitudes toward piracy and their orientations toward IPR from the ethical standpoint (Kwong et al., 2003). Notably lacking from this literature, however, is explicit attention to a wide range of actors’ perceptions of IPR related issues and the complex process of negotiation and interaction among them. Neo-institutional theory frames this process as the evolution of an institutional field. Note that a field is “formed around the issues that become important to the interests and objectives of specific collectives of organizations” (Hoffman, 1999, p. 352). We argue that IPR in China, while well documented, is only partially understood. What are the natures of Chinese national elites’ and consumers’ perceptions of IPR? How do these and other field members interact and negotiate among themselves? These questions are not idiosyncratic to the Chinese economic system, but pertain to an under-researched subject in international business and management: what factors influence the process of societal adoption of foreign institutions (e.g., IPR protection) in emerging economies? Note that an institutional field supporting IPR in a developing economy requires the construction of new identities that redefine social, cognitive and moral legitimacy related to IPR (Misangyi et al., 2008). More broadly, mechanisms associated with institutional actors’ adoption of “a new logic and identity” have been an under-researched aspect of institutional theory (Rao et al., 2003, p. 819). The purpose of our study is to fill this void. We use neo-institutional theory as the theoretical framework. We pursue the line of reasoning related to institutional field, which is a notable research stream in the neo-institutional tradition. Note too that from the standpoint of the institutions-IPR nexus, China deserves special attention. China arguably deviates more than other economies from standard assumptions of neo-classical economics, especially the way institutions function. We examine the period after the 1978 political and economic reforms to present because China’s IPR landscape has changed dramatically during this period (Table 1). Table 1. Major events related to institutionalization of IPR in China: 1978-present Time Event 1978 Economic and political reforms started March 1978 The National Science Conference set the outline of National Science and Technology Development, 1978–1986 1980 China joined the World Intellectual Property Organization 1982 First trademark law was enacted 1984 First “modern” patent law was enacted 1984 China joined the Paris Convention 1986 The 863 Program aimed at the development and research of high technology was approved 1986 China and US initiated ‘IPR consultations’ 1989 China joined the Madrid Protocol and the Washington Convention September 1990 The first copyright law was enacted 1991 Regulations protecting computer software were enacted April 1991 The US added China to a list of countries allowing piracy of copyrights, patents, trademarks and trade secrets May 1991 The US opened a Special 301 investigation of IPR protection in China 1992 Higher people’s courts in several provinces and cities started establishing special IPR courts. By 1996, China had such courts in five provinces and cities: Hainan, Guangdong, Fujian, Beijing and Shanghai January 1992 China and the US settled the Section 301 action by entering into a Memorandum of Understanding (MOU). The MOU required China to join the Berne Convention and the Geneva Phonograms Convention October 1992 China joined the Berne Convention and the Universal Copyright Convention June 1993 China joined the Geneva Phonograms Convention 1994 China joined the Patent Cooperation Treaty in 1994 February 1995 The US announced its intent to impose $1.08 billion in retaliatory tariffs for trade losses due to piracy in China Early 1996 The US asked Beijing to close factories producing pirated CDs and tighten customs controls on exports of pirated goods June 1996 China agreed to close the infringing CD factories and to increase its enforcement efforts 1997 Raids in pirate CD factories August 2000 The People’s Congress approved amended Patent Law which came into effect in 2001 2001 In CCP’s 80th anniversary, President Jiang Zemin handed party membership to a capitalist. His company was the first to be listed on a foreign stock exchange October 2001 New copyright and trademark laws were enacted to conform to the TRIPS Agreement. The amendments broadened the list of protected works November 2001 China became a WTO member 2002 Microsoft announced an investment of $750 million in China 2003 The CCP appointed one of China’s wealthiest entrepreneurs as deputy chairman of an advisory body to the Chongqing municipality March 2006 New law required local PC manufacturers to ship their products with licensed operating systems pre-installed 2006 Shenzhen-based Netac sued PNY Technologies in a US federal court for patent infringement 2007 The US initiated dispute settlement proceedings over deficiencies in China’s IPR regime Table options We turn our attention now to defining several concepts that we use in the paper. Following the World Trade Organization (WTO), we define Intellectual property rights as “the rights given to persons over the creations of their minds”. These include patents, trademarks, copyright, trade secrets and industrial designs. Similarly, institutionalization is defined as the process by which a practice acquires legitimacy and achieves a taken for-granted status. Field members are defined as entities that have a voice in influencing institutional norms regarding IPR issues and participate in the negotiation on these issues. “Consumers” include both businesses as well as individuals using products involving IP. In the remainder of the paper, we first briefly review methodology. Next, we discuss institutional fields as the theoretical foundation. Then, we examine the institutional field formed around IPR in China. The final section provides conclusions and implications.