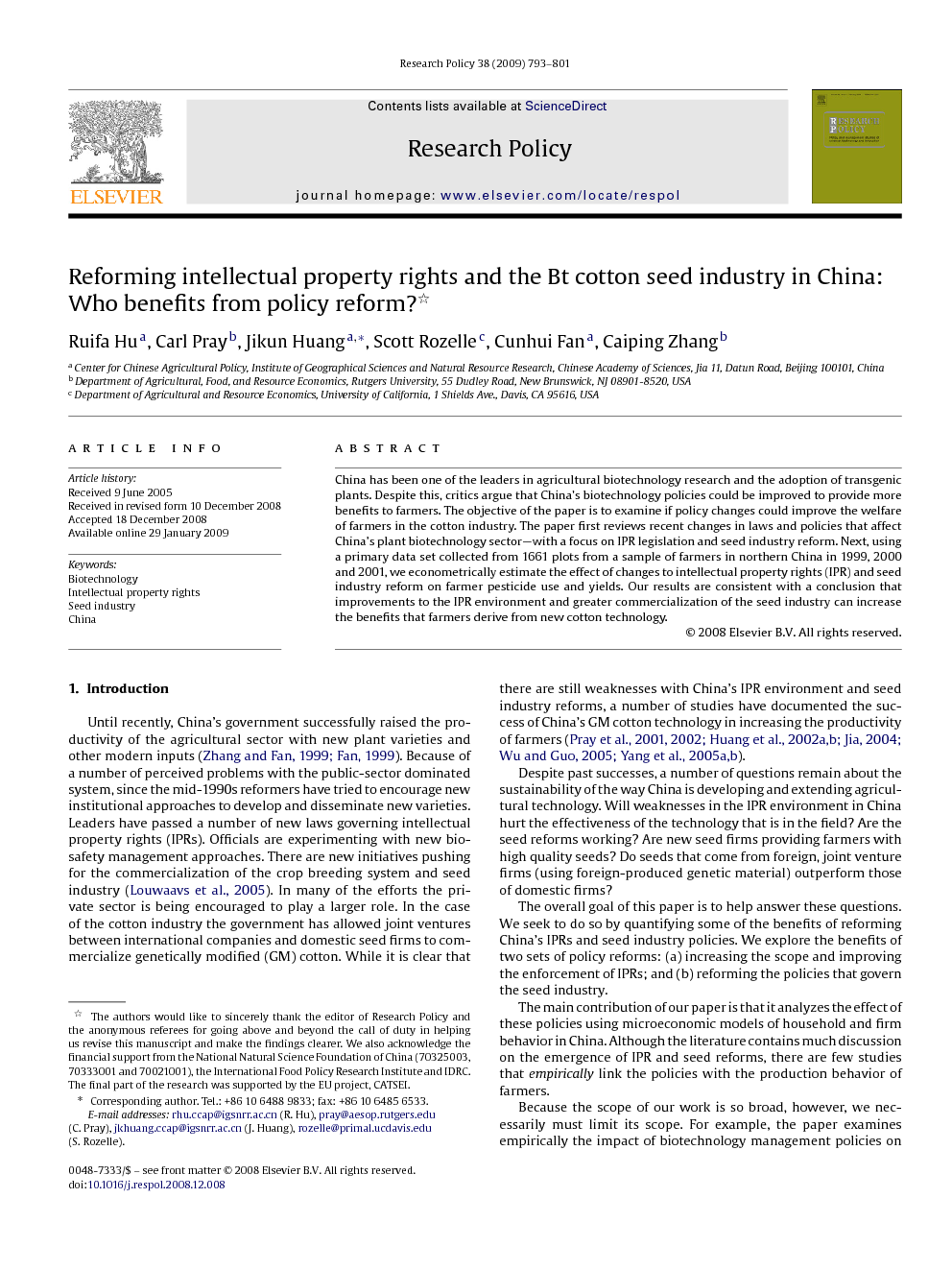 China has been one of the leaders in agricultural biotechnology research and the adoption of transgenic plants. Despite this, critics argue that China's biotechnology policies could be improved to provide more benefits to farmers. The objective of the paper is to examine if policy changes could improve the welfare of farmers in the cotton industry. The paper first reviews recent changes in laws and policies that affect China's plant biotechnology sector—with a focus on IPR legislation and seed industry reform. Next, using a primary data set collected from 1661 plots from a sample of farmers in northern China in 1999, 2000 and 2001, we econometrically estimate the effect of changes to intellectual property rights (IPR) and seed industry reform on farmer pesticide use and yields. Our results are consistent with a conclusion that improvements to the IPR environment and greater commercialization of the seed industry can increase the benefits that farmers derive from new cotton technology.

Until recently, China's government successfully raised the productivity of the agricultural sector with new plant varieties and other modern inputs (Zhang and Fan, 1999 and Fan, 1999). Because of a number of perceived problems with the public-sector dominated system, since the mid-1990s reformers have tried to encourage new institutional approaches to develop and disseminate new varieties. Leaders have passed a number of new laws governing intellectual property rights (IPRs). Officials are experimenting with new bio-safety management approaches. There are new initiatives pushing for the commercialization of the crop breeding system and seed industry (Louwaavs et al., 2005). In many of the efforts the private sector is being encouraged to play a larger role. In the case of the cotton industry the government has allowed joint ventures between international companies and domestic seed firms to commercialize genetically modified (GM) cotton. While it is clear that there are still weaknesses with China's IPR environment and seed industry reforms, a number of studies have documented the success of China's GM cotton technology in increasing the productivity of farmers (Pray et al., 2001, Pray et al., 2002, Huang et al., 2002a, Huang et al., 2002b, Jia, 2004, Wu and Guo, 2005, Yang et al., 2005a and Yang et al., 2005b). Despite past successes, a number of questions remain about the sustainability of the way China is developing and extending agricultural technology. Will weaknesses in the IPR environment in China hurt the effectiveness of the technology that is in the field? Are the seed reforms working? Are new seed firms providing farmers with high quality seeds? Do seeds that come from foreign, joint venture firms (using foreign-produced genetic material) outperform those of domestic firms? The overall goal of this paper is to help answer these questions. We seek to do so by quantifying some of the benefits of reforming China's IPRs and seed industry policies. We explore the benefits of two sets of policy reforms: (a) increasing the scope and improving the enforcement of IPRs; and (b) reforming the policies that govern the seed industry. The main contribution of our paper is that it analyzes the effect of these policies using microeconomic models of household and firm behavior in China. Although the literature contains much discussion on the emergence of IPR and seed reforms, there are few studies that empirically link the policies with the production behavior of farmers. Because the scope of our work is so broad, however, we necessarily must limit its scope. For example, the paper examines empirically the impact of biotechnology management policies on the production of farmers (use of pesticides and yields). Unfortunately, while it is important to consider enforcement costs, we have little information on such costs. Likewise, although we analyze which types of seed allow farmers to use less pesticides and have higher yields, our data do not allow us to identify the precise reason (e.g., agronomic or pathology) why pesticide use is higher and yields are lower.

This paper reviews the changes that have taken place in the laws and policies that officials use to manage China's plant biotechnology sector—IPR legislation and seed industry reforms. In reviewing China's IPRs and seed industry reforms, the paper has identified shortcomings in the current systems. Despite the weaknesses, seed firms are developing new varieties at a rate greater than in the past. These investments, however, are still extremely small compared to those of private seed firms in many OECD countries or other developing countries (Pray and Fuglie, 2001). Using data collected from farmers in China, our regression analysis not only confirms what earlier studies have shown—Bt cotton uses much less pesticide and has higher yield when compared to conventional, non-Bt cotton. It also shows that legitimate seed from commercial sources provides more benefits to farmers than illegitimate seed. We also found that seed that came through commercial seed channels was technically more efficient on the plots of farmers than seed that came through traditional, non-commercial channels. Foreign seeds (allowed into the country by past seed industry reform) outperformed domestic seed. In other words, our results suggest that the government should continue to consider pushing forward its IPR reform and enforcement as well as seed industry reform. If so, according to our results, the production efficiency of cotton should rise on the plots of farmers. Alternatively, there may be another set of policy suggestions that are implied by the results that do not require the government to increase its efforts in implementation and enforcement of IPRs and seed industry reform. It could be that such efforts are difficult to implement in practice and the costs of implementation and enforcement (which are ignored in our analysis) could offset all or part of the benefits. If the main reason that farmers do not all use the most effective types of commercial seeds, legitimate Jidai and legitimate Biocentury, is that they did not know any better, it could be the most appropriate response to this study's findings is to publicize the results. If farmers (and local officials) know the benefits of using legitimate Bt cotton seeds, without any additional regulation, it is possible that they would adopt these varieties in higher numbers.