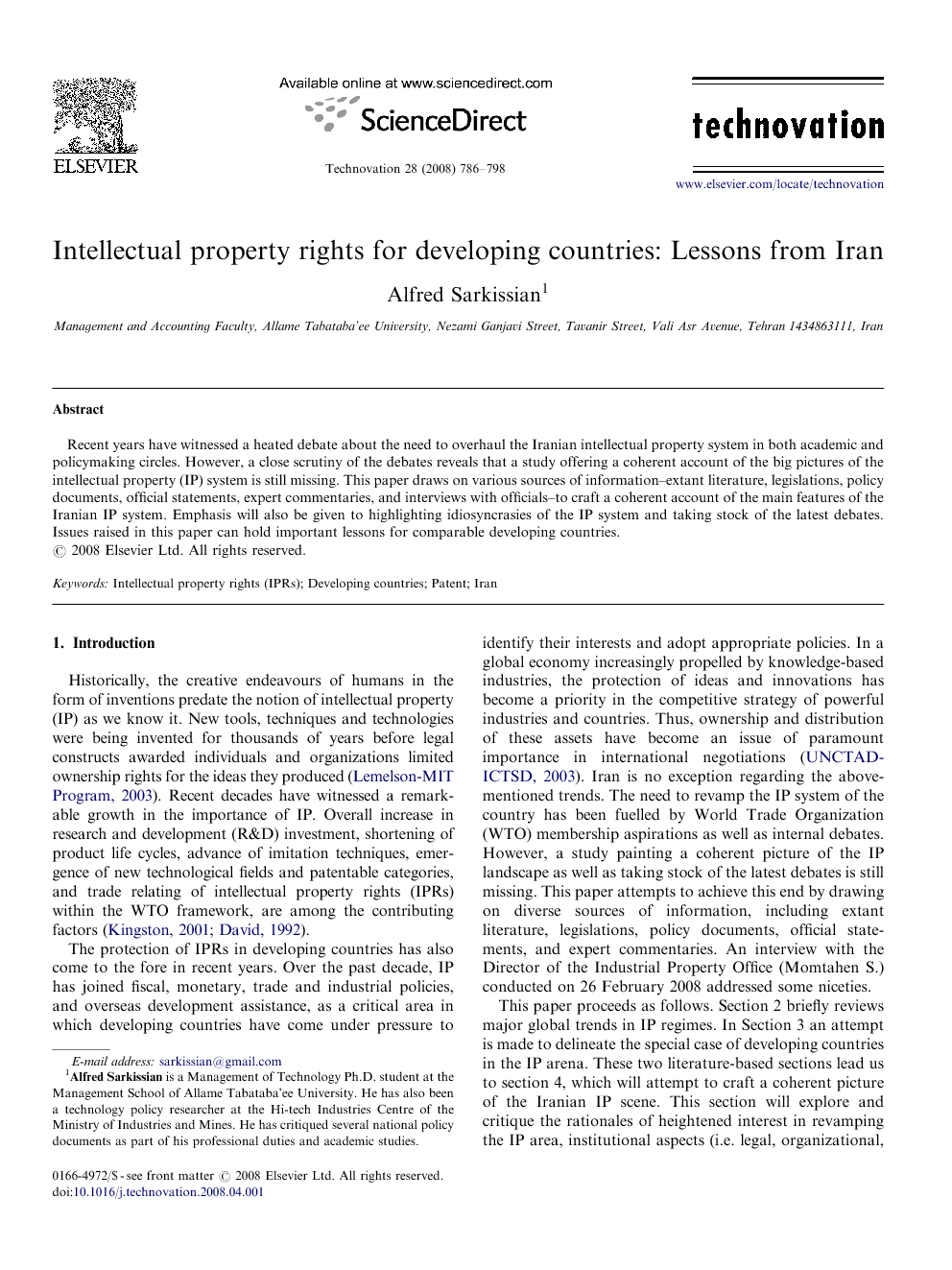 Recent years have witnessed a heated debate about the need to overhaul the Iranian intellectual property system in both academic and policymaking circles. However, a close scrutiny of the debates reveals that a study offering a coherent account of the big pictures of the intellectual property (IP) system is still missing. This paper draws on various sources of information–extant literature, legislations, policy documents, official statements, expert commentaries, and interviews with officials–to craft a coherent account of the main features of the Iranian IP system. Emphasis will also be given to highlighting idiosyncrasies of the IP system and taking stock of the latest debates. Issues raised in this paper can hold important lessons for comparable developing countries.

Historically, the creative endeavours of humans in the form of inventions predate the notion of intellectual property (IP) as we know it. New tools, techniques and technologies were being invented for thousands of years before legal constructs awarded individuals and organizations limited ownership rights for the ideas they produced (Lemelson-MIT Program, 2003). Recent decades have witnessed a remarkable growth in the importance of IP. Overall increase in research and development (R&D) investment, shortening of product life cycles, advance of imitation techniques, emergence of new technological fields and patentable categories, and trade relating of intellectual property rights (IPRs) within the WTO framework, are among the contributing factors (Kingston, 2001; David, 1992). The protection of IPRs in developing countries has also come to the fore in recent years. Over the past decade, IP has joined fiscal, monetary, trade and industrial policies, and overseas development assistance, as a critical area in which developing countries have come under pressure to identify their interests and adopt appropriate policies. In a global economy increasingly propelled by knowledge-based industries, the protection of ideas and innovations has become a priority in the competitive strategy of powerful industries and countries. Thus, ownership and distribution of these assets have become an issue of paramount importance in international negotiations (UNCTAD-ICTSD, 2003). Iran is no exception regarding the abovementioned trends. The need to revamp the IP system of the country has been fuelled by World Trade Organization (WTO) membership aspirations as well as internal debates. However, a study painting a coherent picture of the IP landscape as well as taking stock of the latest debates is still missing. This paper attempts to achieve this end by drawing on diverse sources of information, including extant literature, legislations, policy documents, official statements, and expert commentaries. An interview with the Director of the Industrial Property Office (Momtahen S.) conducted on 26 February 2008 addressed some niceties. This paper proceeds as follows. Section 2 briefly reviews major global trends in IP regimes. In Section 3 an attempt is made to delineate the special case of developing countries in the IP arena. These two literature-based sections lead us to section 4, which will attempt to craft a coherent picture of the Iranian IP scene. This section will explore and critique the rationales of heightened interest in revamping the IP area, institutional aspects (i.e. legal, organizational, and procedural issues) of the IP system, and finally the patenting performance of Iranian entities. Section 5 will discuss the implications of some of the important observations. Finally, section 6 will conclude the paper with highlighting some of the findings with broader implications and tentative lessons for other similar developing countries.

The account of the Iranian IP system presented in this paper can offer insights in the analysis of similar IP systems. Perhaps more importantly, the pitfalls and idiosyncrasies highlighted can be generalized to comparable developing countries and be helpful in lesson-drawing exercises. To conclude this paper I will briefly tackle broader issues that can be tentatively generalized to other developing countries. To begin with, for those who are primarily concerned with the existence of the law on the book, two lessons can be drawn from the Iranian account examined here. Firstly, despite having articles of law on trade names since 1933, they were never operationalized. Secondly, lack of explicit reference to a specific type of IP may not necessarily reflect unavailability of protection. For instance, even without the 2005 Protection of Geographical Indications Act, the trademark definition under the 1931 act seemingly included geographical indications. Also, despite the lack of reference to industrial designs, they have been registered as trademarks in spite of the lack of correspondence between the definitions of trademarks and industrial designs (Akhlaghi and Habiba, 2006). In fact, many aspects of IP protection are determined not only by particular IPR laws, but also by administrative practices and intervention of courts, which ultimately decide over infringement and validity of IPRs (Harhoff, 2006). Despite a long history of IP protection, no evidence of the incentive function can be detected from the preliminary study of the patenting performance. This tentative observation is in line with the literature that warns of little evidence of the incentive function in developing economies (see e.g. Verspagen, 1999a). In fact the chronology of the Iranian IP legislation points to the precedence of facilitating trade over the mere stimulation of invention in IP protection. The IP literature on developing countries blames the north for the strengthening of IPRs. However, in complex developing countries, contrasting vested interests may exist and an additional driving force for stronger IPRs may come from within the country. For example, the website of the High Council of Informatics contains a draft Act for the protection of database creators dating back to 2001. Countries may develop idiosyncratic organizational set-ups based on past history and institutional peculiarities. Therefore, arguments over altering institutional set-ups must be based on removing bottlenecks and capability building rather than cosmetic changes for the sake of change or yielding to vested interests. The bickering over the organizational set-up of the IP system in Iran might have to some extent stemmed from a poor governance structure. A governance structure weak in transparency and accountability can set government bodies vying for more functions as increased functions will bring along budget allocation and influence, without requiring the effort under a governance structure based on transparency and accountability.