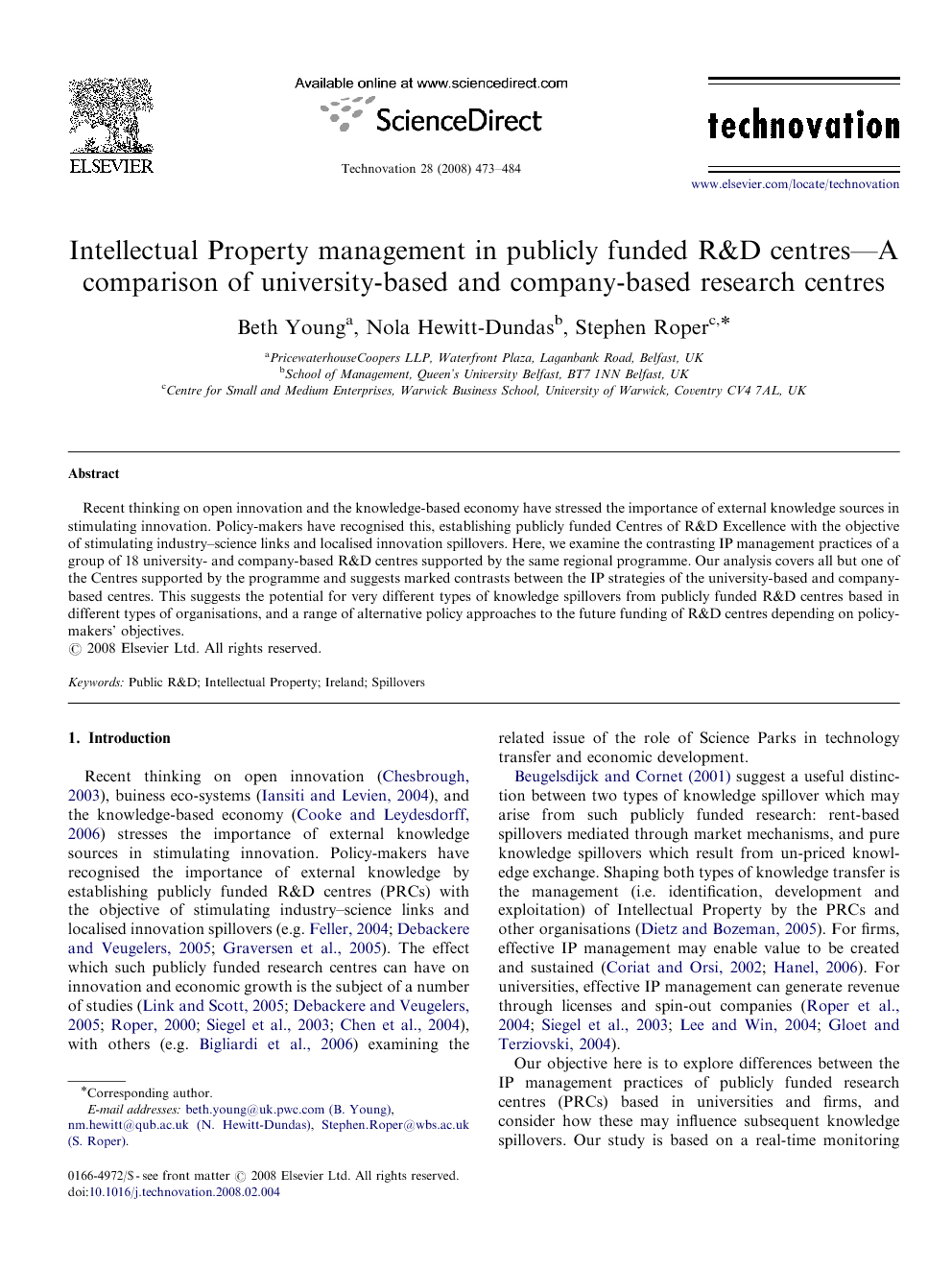 Recent thinking on open innovation and the knowledge-based economy have stressed the importance of external knowledge sources in stimulating innovation. Policy-makers have recognised this, establishing publicly funded Centres of R&D Excellence with the objective of stimulating industry–science links and localised innovation spillovers. Here, we examine the contrasting IP management practices of a group of 18 university- and company-based R&D centres supported by the same regional programme. Our analysis covers all but one of the Centres supported by the programme and suggests marked contrasts between the IP strategies of the university-based and company-based centres. This suggests the potential for very different types of knowledge spillovers from publicly funded R&D centres based in different types of organisations, and a range of alternative policy approaches to the future funding of R&D centres depending on policy-makers’ objectives.

Recent thinking on open innovation (Chesbrough, 2003), buiness eco-systems (Iansiti and Levien, 2004), and the knowledge-based economy (Cooke and Leydesdorff, 2006) stresses the importance of external knowledge sources in stimulating innovation. Policy-makers have recognised the importance of external knowledge by establishing publicly funded R&D centres (PRCs) with the objective of stimulating industry–science links and localised innovation spillovers (e.g. Feller, 2004; Debackere and Veugelers, 2005; Graversen et al., 2005). The effect which such publicly funded research centres can have on innovation and economic growth is the subject of a number of studies (Link and Scott, 2005; Debackere and Veugelers, 2005; Roper, 2000; Siegel et al., 2003; Chen et al., 2004), with others (e.g. Bigliardi et al., 2006) examining the related issue of the role of Science Parks in technology transfer and economic development. Beugelsdijck and Cornet (2001) suggest a useful distinction between two types of knowledge spillover which may arise from such publicly funded research: rent-based spillovers mediated through market mechanisms, and pure knowledge spillovers which result from un-priced knowledge exchange. Shaping both types of knowledge transfer is the management (i.e. identification, development and exploitation) of Intellectual Property by the PRCs and other organisations (Dietz and Bozeman, 2005). For firms, effective IP management may enable value to be created and sustained (Coriat and Orsi, 2002; Hanel, 2006). For universities, effective IP management can generate revenue through licenses and spin-out companies (Roper et al., 2004; Siegel et al., 2003; Lee and Win, 2004; Gloet and Terziovski, 2004). Our objective here is to explore differences between the IP management practices of publicly funded research centres (PRCs) based in universities and firms, and consider how these may influence subsequent knowledge spillovers. Our study is based on a real-time monitoring exercise of the IP management practices in a group of UK PRCs established since 2002. This localised, and detailed approach, complements the more abstract but broadly based analysis of Guellec and Van Pottelsberghe De La Potterie (2004), for example, providing insights into the processes underlying local knowledge transfers. Our paper addresses the need highlighted by Link and Siegel (2005) for more specific micro-evidence on the operation of technology transfer initiatives in different national and regional contexts. The remainder of the paper is organised as follows. Section 2 outlines our conceptual approach and empirical propositions. Section 3 reviews the policy context for our empirical study and describes our data sources and methods. Section 4 explores the IP management practices of the PRCs, and Section 5 indicates the influence which organisational context has on the IP strategies adopted by PRCs. Section 6 draws out the implications for regional knowledge spillovers and future policy decisions.

Our data, drawn from a set of 18 UK R&D centres funded through a single government programme, suggest some contrasts in IP strategy and management between university-based and company-based R&D centres despite their common funding source. We also observe differences within each group depending on the nature of the firm in which each R&D centre is located and—to a lesser extent—the IP model adopted in university-based R&D centres. In terms of IP strategy, we find continuing differences between the company and university-based PRCs. For the company-based PRCs codified IP is a primary source of competitive advantage, which despite their public funding, restricts external dissemination and knowledge transfer. For the university-based PRCs in our sample on the other hand, IP commercialisation remains secondary to knowledge creation and dissemination, with little clear difference in strategy between centres adopting apparently different IP models. A range of possibilities are evident here. It could simply be that we have allocated PRCs wrongly between the open science, licensing and open innovation models evening out any differences in IP strategy which might be evident with a different allocation. Alternatively, and perhaps more consistent with the apparent uniformity of IP strategy between the university-based PRCs, is that they have developed no comprehensive IP strategy independent of the norm within the university or simply that they have no clear IP strategy. Whatever the case, it is clear that for the university-based PRCs the public good aspect of their activities remains predominant, epitomised by extensive dissemination activities. Therefore, we found little evidence of the increasingly secretive culture which Mowery et al. (2004) identified in the US universities. Within the group of company-based PRCs organisational characteristics, such as size and ownership, did appear to influence their IP strategy. The IP strategy of PRCs based in multinationals was based on longer-term concerns of IP codification and protection, whereas PRCs based in locally owned firms were more focused on achieving speed to market. Within the university-based PRCs we found some centres that were clearly more engaged in a commercialisation agenda. For instance, PRCs following the innovation model were much more focused on the practical application of their research, however, even these PRCs considered IP exploitation as secondary to knowledge creation. Moreover, industrial links formed through commercialisation activity were often viewed as a means of gaining access to a company in order to pursue a particular research agenda. Given the increasing importance of IPR (Hanel, 2006; Coriat and Orsi, 2002; Arai, 1999; Allen, 2003) it was encouraging to find that all PRCs had clear and well defined IP ownership policies, thus protecting the organisations’ investment in R&D and avoiding unnecessary legal disputes. In addition, many centres, including all of those based in universities, actively encouraged the creation and protection of IP by providing financial incentives and staff training on IP issues. Approaches to incentivising staff clearly differ, however, between company and university-based PRCs. The level and formality of IP protection sought by company-based PRCs depended on organisational objectives, available resources and the type of technology being developed, with centres based in multinational's more likely to engage in formal IP protection than those in smaller locally owned firms. The majority of university-based PRCs sought to patent their IP where possible and then either license out that IP to a third party or create a spin-out company. There was, however, clear evidence that the cost of obtaining and defending patents was prohibitive for some locally owned and university-based PRCs. In each case, these difficulties are likely to have a negative effect on the longer-term regional benefits of any public investment in R&D either by encouraging secrecy on the part of the company-based PRCs or by creating unprotected intellectual assets in the university-based PRCs. Every PRC had access to expert advice on IP management, either from within their sponsoring organisation or through external patent lawyers. The way in which the company-based PRCs used these support services depended on organisational characteristics such as size and ownership, while for the university-based PRCs prior experience was the determining factor. This means not only are the PRCs seeking to create advantage by protecting their IP from misuse by other organisations, but they are also actively trying to exploit it for their own financial gain. This should have a positive influence on the innovative capacity of the PRCs and therefore on their ability to generate positive regional spillovers (Graversen et al., 2005; Link and Siegel, 2005).