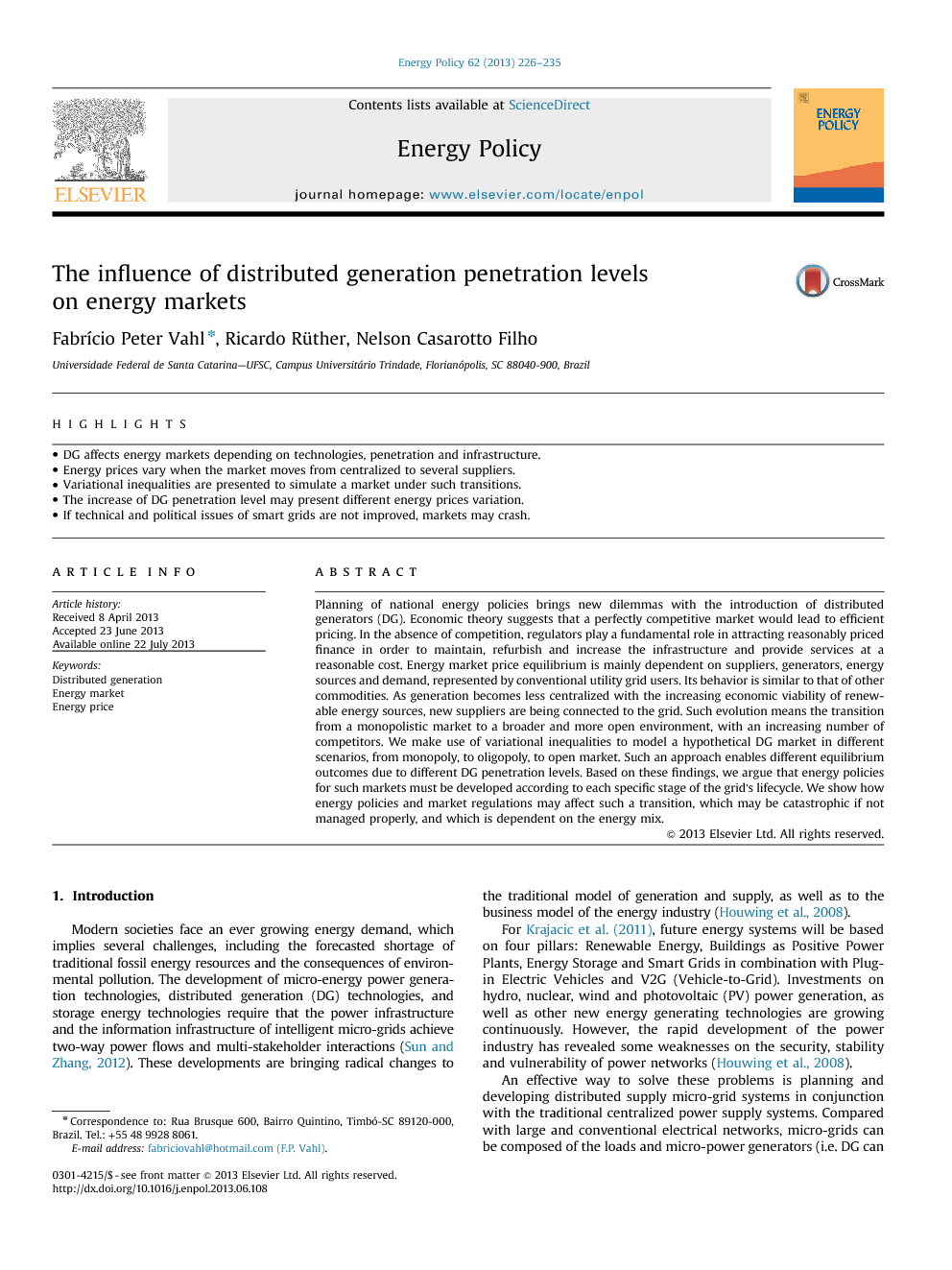 Planning of national energy policies brings new dilemmas with the introduction of distributed generators (DG). Economic theory suggests that a perfectly competitive market would lead to efficient pricing. In the absence of competition, regulators play a fundamental role in attracting reasonably priced finance in order to maintain, refurbish and increase the infrastructure and provide services at a reasonable cost. Energy market price equilibrium is mainly dependent on suppliers, generators, energy sources and demand, represented by conventional utility grid users. Its behavior is similar to that of other commodities. As generation becomes less centralized with the increasing economic viability of renewable energy sources, new suppliers are being connected to the grid. Such evolution means the transition from a monopolistic market to a broader and more open environment, with an increasing number of competitors. We make use of variational inequalities to model a hypothetical DG market in different scenarios, from monopoly, to oligopoly, to open market. Such an approach enables different equilibrium outcomes due to different DG penetration levels. Based on these findings, we argue that energy policies for such markets must be developed according to each specific stage of the grid's lifecycle. We show how energy policies and market regulations may affect such a transition, which may be catastrophic if not managed properly, and which is dependent on the energy mix.

Modern societies face an ever growing energy demand, which implies several challenges, including the forecasted shortage of traditional fossil energy resources and the consequences of environmental pollution. The development of micro-energy power generation technologies, distributed generation (DG) technologies, and storage energy technologies require that the power infrastructure and the information infrastructure of intelligent micro-grids achieve two-way power flows and multi-stakeholder interactions (Sun and Zhang, 2012). These developments are bringing radical changes to the traditional model of generation and supply, as well as to the business model of the energy industry (Houwing et al., 2008). For Krajacic et al. (2011), future energy systems will be based on four pillars: Renewable Energy, Buildings as Positive Power Plants, Energy Storage and Smart Grids in combination with Plug-in Electric Vehicles and V2G (Vehicle-to-Grid). Investments on hydro, nuclear, wind and photovoltaic (PV) power generation, as well as other new energy generating technologies are growing continuously. However, the rapid development of the power industry has revealed some weaknesses on the security, stability and vulnerability of power networks (Houwing et al., 2008). An effective way to solve these problems is planning and developing distributed supply micro-grid systems in conjunction with the traditional centralized power supply systems. Compared with large and conventional electrical networks, micro-grids can be composed of the loads and micro-power generators (i.e. DG can be contained in the micro-grid, such as wind or photovoltaic power generation), which can provide electricity, and often heat simultaneously (Daoutis and Dialynas, 2009). Both the siting and the capacity of a DG source have different influences on the short-circuit currents, bus voltages and power flows in distribution grids (Jardim et al., 2008, Rüther et al., 2008, Rüther and Braun, 2009, Molina and Mercado, 2010, Braun and Rüther, 2010 and Urbanetz et al., 2012). The deployment of distributed generation faces several technical barriers as penetration level increases. We argue that planning distribution energy grids with increasing DG also requires incremental economic policy changes. As penetration level increases, different economic scenarios and outcomes shall be dealt with. We have modeled a distribution grid as an energy market, transitioning from a monopolistic structure to a scenario with an increasing number of competitors, in order to simulate a grid considering the transition from centralized to distributed supply. This study allows for the evaluation of possible economic scenarios that may appear in future energy networks. This article aims at comparing energy market characteristics, such as price and quantity (MWh), considering distributed and centralized generation, also taking into account the increasing penetration levels of renewables. In Section 2 we present a literature review on DG's characteristics, which were considered in the model development. In Section 3, we present the general characteristics of energy markets, followed by a description of the influence of deregulation and DG penetration on such markets. In 4 and 6, we propose a mathematical model using variational inequalities for energy markets with DG. In Section 6 we present the results of the simulations using the proposed model, based on three different DG technologies (PV, wind and biomass) and on market structures.

The energy market structure is changing due to new energy generating technologies and the so-called DG. Our main objective in this paper was to evaluate how DG penetration may interfere in the energy market structure. A model using variational inequalities was presented in order to simulate an energy market going through the transition from centralized generation to a 100% DG penetration level. The results showed that as the penetration level increases, the energy price is supposed to drop, although very slowly due to energy demand-price elasticity. PV and wind energy generation systems will achieve considerable market share as they are technologies that present increasing economic feasibility to substitute conventional generation technologies, with solid market structures at mature levels, and thus lower energy prices than centralized supply. However, technical issues, as intermittency of generation, require back up power from other sources. Thus, unless secured by storage systems or the conventional utility grid, 100% DG penetration levels are not sustainable for PV and wind generators, even for hybrid systems combining both. Energy storage is then strategic for increasing wind and PV penetration levels, maintaining system reliability. Furthermore, such storage systems may increase the return of investment on DG, supplying energy at peak demand hours, when higher prices are met. National energy programs must present adequate policies in order to provide incentives to these systems. Energy policies are required to give incentives for these systems, with the intent to secure power system's stability and also increase DG feasibility. Although DG is intended to make life easier for consumers, making energy prices drop, regulations must retain this price at justified levels, since the market transition, from centralized to 100% open, is still surrounded by a number of uncertainties that must be properly addressed. The competition among distributed generators will be a challenge for policy makers to regulate, since they must consider the level of development of each technology, the rate of adoption of each available source, the dominant or conventional infra-structure that will have to be upgraded, the location of each DG and the distance from users, the IT available, and so forth. Beyond such findings, another issue not included in our analysis is the possibility to charge different rates for reactive and active power, what could be considered another market niche for DG owners, as well as peak shaving supply, which have not been well served by many conventional grids. In the long run, with consumers being able to select the energy supplier, energy price elasticity is also likely to change, and this analysis will have to be revisited. If the transition from a centralized generation to a 100% DG penetration level is not properly managed, the energy market may crash, and DG energy producers will be affected with prices that might not cover marginal costs, and which might negatively affect and compromise both energy prices and supply levels.