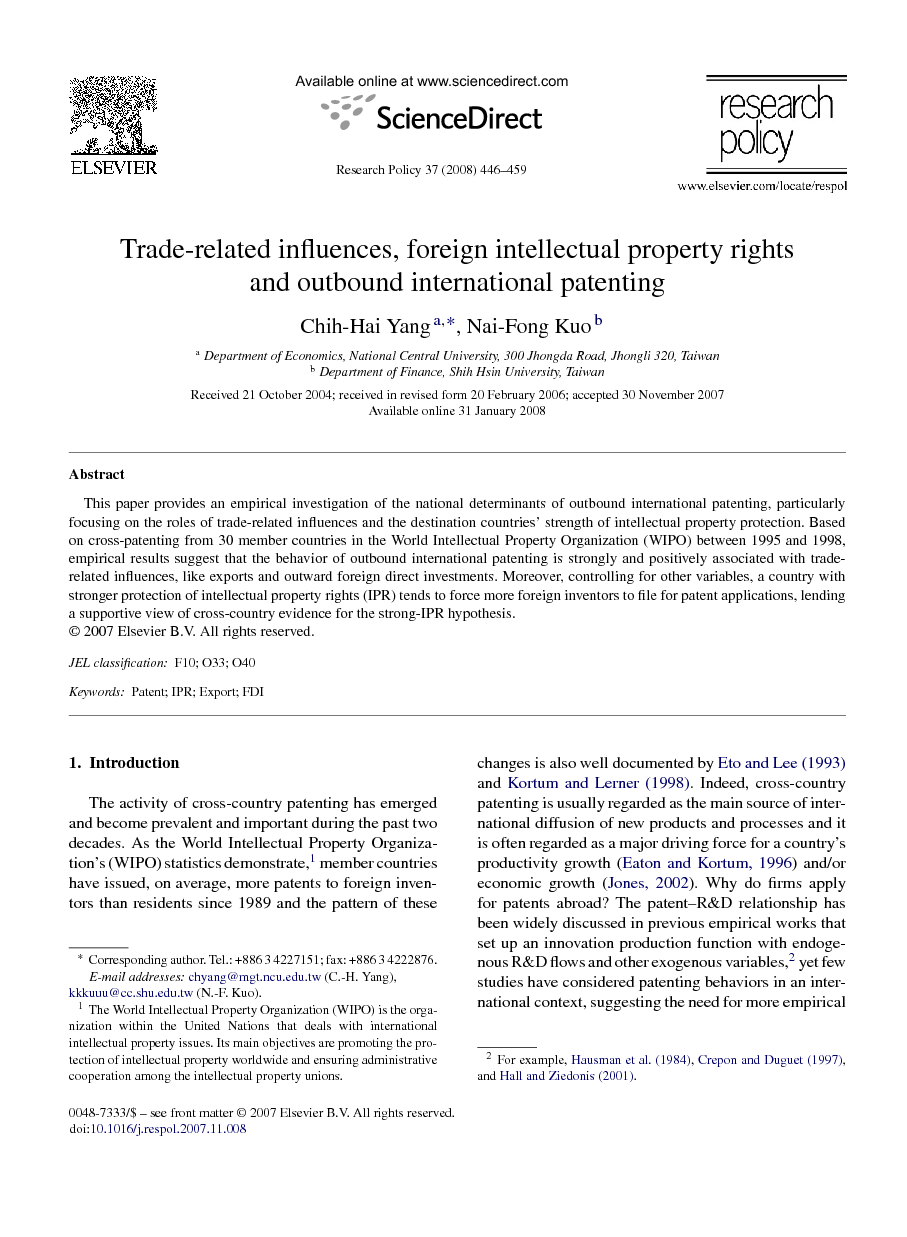 This paper provides an empirical investigation of the national determinants of outbound international patenting, particularly focusing on the roles of trade-related influences and the destination countries’ strength of intellectual property protection. Based on cross-patenting from 30 member countries in the World Intellectual Property Organization (WIPO) between 1995 and 1998, empirical results suggest that the behavior of outbound international patenting is strongly and positively associated with trade-related influences, like exports and outward foreign direct investments. Moreover, controlling for other variables, a country with stronger protection of intellectual property rights (IPR) tends to force more foreign inventors to file for patent applications, lending a supportive view of cross-country evidence for the strong-IPR hypothesis.

The activity of cross-country patenting has emerged and become prevalent and important during the past two decades. As the World Intellectual Property Organization's (WIPO) statistics demonstrate,1 member countries have issued, on average, more patents to foreign inventors than residents since 1989 and the pattern of these changes is also well documented by Eto and Lee (1993) and Kortum and Lerner (1998). Indeed, cross-country patenting is usually regarded as the main source of international diffusion of new products and processes and it is often regarded as a major driving force for a country's productivity growth (Eaton and Kortum, 1996) and/or economic growth (Jones, 2002). Why do firms apply for patents abroad? The patent–R&D relationship has been widely discussed in previous empirical works that set up an innovation production function with endogenous R&D flows and other exogenous variables,2 yet few studies have considered patenting behaviors in an international context, suggesting the need for more empirical evidence on the determinants of outbound international patenting. The patent right is widely regarded as an instrument for temporally enforcing the appropriate return to R&D investment. However, patent law is a territorialism, meaning that the protection mechanism is effective only when a firm files a patent in that country. The cost of outbound international patenting is perhaps higher than that in the home country,3 while many firms act aggressively for outbound international patenting to protect their products in foreign markets and/or to construct patent portfolios that enhance their international competitiveness. This inspires the central issue explored in this study, which is that outbound international patenting should be intrinsically related to trade-related influences because the aim of firm patenting in a foreign country is to seek legal protection against potential imitators that would either export or produce goods through the establishment of foreign affiliates. Intellectual property rights (hereafter IPR) have alternatively stimulated significant attention in the international economic policy arena over the past decades. IPR laws and the enforcement of existing laws differ widely across countries due to national differences in economic development and trade policy. The issue of how to strengthen and harmonize these means for protecting IPR across countries has stimulated significant attention in the arena of international economic policy, while the divergence for the effects of strengthening IPR between the North and South countries has increased in recent years. The enforcement of IPR and the threat of enforcement are of primary importance to those engaged in innovative activities. Merges (1992) argues that the upsurge of U.S. patenting activity that began in the mid-1980s is mainly driven by changes in the legal environment for patent holders. This argument is well known by economists as the “pro-patent policy hypothesis”, while empirical attention attempting to discern whether stronger patents induce more patents is limited and remains ambiguous and uncertain. More importantly, fewer studies have investigated whether foreign intellectual property rights (hereafter FIPR) aid or abet the flow of ideas across national borders, even though the role played by FIPR on exports, foreign direct investment, and technology transfer is well documented (e.g., Ferrantino, 1993, Taylor, 1993, Maskus and Penubarti, 1995, Smith, 1999 and Smith, 2001). This article aims to provide empirical evidence for national determinants of outbound international patenting and contributes the following three distinct types of empirical evidence that are in line with the literature: first, we develop a simple theoretical framework and use a new comprehensive information from a broader country dataset to investigate the national determinants of outbound international patenting. Second, this study proposes a “trade-related hypothesis” that specifies the role played by trade-related influences, including exports and outward foreign direct investment (hereafter OFDI) on a country's outbound international patenting and tests whether this hypothesis is supported. Third, we assess whether the strength of FIPR attracts, ceteris paribus, more inbound foreign patents in that country, which has been termed, as the “stronger IPR hypothesis”, and tests whether this hypothesis can be supported in an international context. By extending the country-level innovation production function and adopting cross-patenting data among 30 countries during the period of 1995–1998, this paper aims to assess the role played by trade-related influences and the strength of FIPR on a country's outbound international patenting. The empirical results lend support to the hypotheses proposed in the study, namely, that the behaviors of outbound international patenting are influenced by trade-related factors and foreign intellectual property rights. Both exports and outward foreign direct investments have a significant and positive impact on overseas patenting. The strength of FIPR functions as an effective mechanism to increase foreign firms’ propensity for patenting in a particular country, and this argument is supported in different specifications, supporting the hypothesis that stronger IPR induce more patents. The remainder of this paper is organized as follows: Section 2 briefly discusses cross-country patenting activity over the past decades. In Section 3, we review the related literature on cross-country patenting and the relationship between strengthening IPR and patenting. The theoretical and empirical frameworks are derived and the hypotheses are proposed in Section 4. In Section 5 we analyze the econometric results. Concluding remarks and policy implications are discussed in the final section.

With regard to the current circumstance observed in international trade relative to the pre-1990s, firms are filing far more patent applications, both domestically and internationally to protect their innovations and preserve their international competitiveness. Due to the emerging popularity of cross-country patenting, a divergence in the degree of patent enforcement and the effects of strengthening IPR between developed and developing countries have been observed. The driving forces of outbound international patenting are less represented in the literature. In this paper we present a simple theoretical framework of outbound international patenting that encompasses the potential influences of trade-related factors and foreign intellectual property rights and propose two hypotheses. Based on more comprehensive cross-national panel data, we use this framework to guide empirical exploration into the determinants of country-level differences in outbound international patenting. This study examines the relationship between outbound international patenting and variables associated with the theoretical framework, especially for trade-related influences and foreign intellectual property rights. The empirical results show that national innovative capacity, which is measured as R&D expenditure or R&D intensity, is the essential element for the protection of a country's innovative technology. At the same time, the propensity for producing innovation also depends on the legal environment for innovation and the degree of IPR in a country. Second, the demand-pull effect of technological change is supported in that a relatively larger foreign market will induce more innovations to seek patent protection in that country. The following two results drawn from our empirical analyses are worth noting. First, we find that a great deal of variation on outbound international patenting across countries can be plausibly attributed to trade-related influences. When a nation's exports and outward foreign direct investment increases, it will apply for more patents in the destination country because it must seek legal protection for its products and innovations. Indeed, outbound international patenting is trade-related, which is spurred by the amount of exports and outward foreign direct investment, strongly supported by the trade-related hypothesis. Second, countries with stronger IPR offer a legal environment that can increase, ceteris paribus, the foreign inventors’ propensity to patent and seek shelter from imitation, which results in a greater number of issued patents, particularly in countries that have a strong imitative threat. This finding supports the argument of our strong-patent hypothesis. A key international economic policy implication is inspired from the results. IPR have come to the forefront of international trade negotiation currently, while the divergence for the effects of strengthening IPR between North and South countries seems to have widened in recent years. Advanced countries often contend that stronger-patent protection would be good even for developing countries, by stimulating more domestic innovations as well as by attracting more foreign direct investment. Alternatively, some developing countries argue that an extension of international IPR would harm their technological progress. They would like to establish weaker regimes favoring technological diffusion through imitation and acquisition from abroad. Our analyses indicate that a country with weak imitative capability and FIPR would not reduce the propensity for patenting and advanced countries would still act aggressively to patent in developing countries, even though they usually complain that law enforcement is weak in some South countries. Yang (2003) indicates that patents issued to advanced countries’ inventors serve as a learning channel for developing countries to promote their technological capability. Therefore, the policy to strengthen and harmonize these means of protecting IPR seems to be harmless for developing countries in the long run.