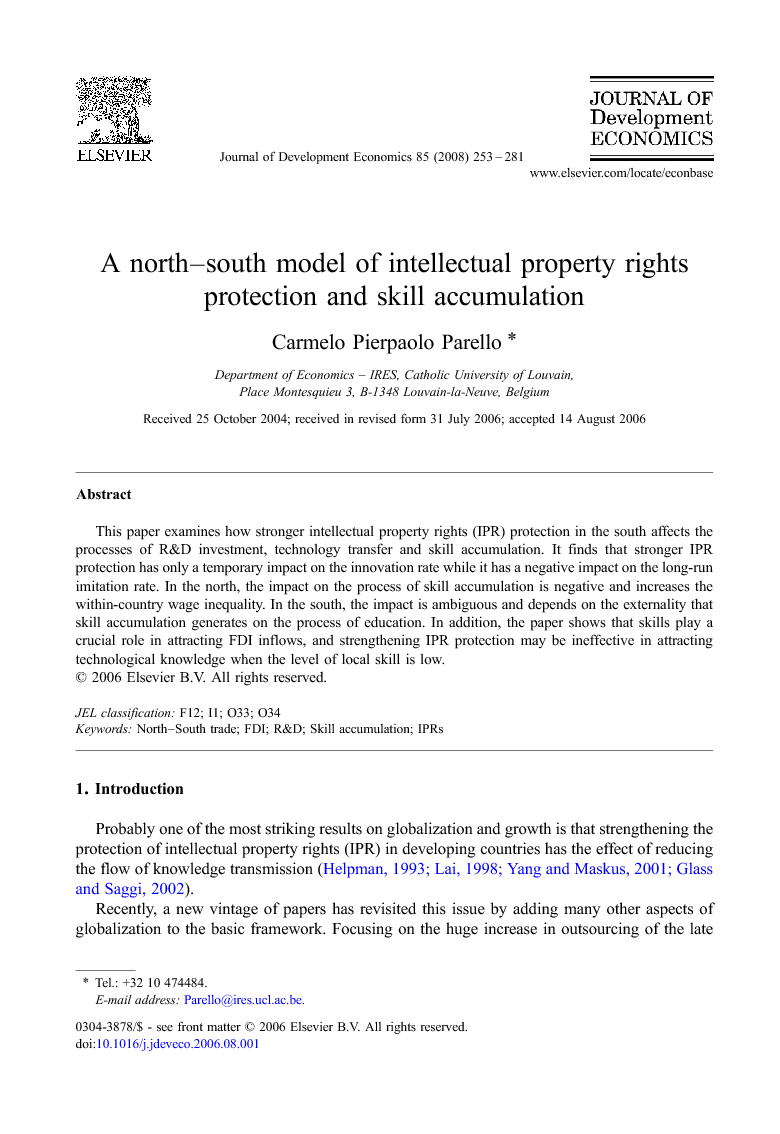 This paper examines how stronger intellectual property rights (IPR) protection in the south affects the processes of R&D investment, technology transfer and skill accumulation. It finds that stronger IPR protection has only a temporary impact on the innovation rate while it has a negative impact on the long-run imitation rate. In the north, the impact on the process of skill accumulation is negative and increases the within-country wage inequality. In the south, the impact is ambiguous and depends on the externality that skill accumulation generates on the process of education. In addition, the paper shows that skills play a crucial role in attracting FDI inflows, and strengthening IPR protection may be ineffective in attracting technological knowledge when the level of local skill is low.

Probably one of the most striking results on globalization and growth is that strengthening the protection of intellectual property rights (IPR) in developing countries has the effect of reducing the flow of knowledge transmission (Helpman, 1993, Lai, 1998, Yang and Maskus, 2001 and Glass and Saggi, 2002). Recently, a new vintage of papers has revisited this issue by adding many other aspects of globalization to the basic framework. Focusing on the huge increase in outsourcing of the late four decades, Glass (2004) finds that an increase in the intensity of imitation decreases the rate of innovation and the extent of outsourcing, while increasing the relative wage of the south. A similar result has been reached by Dinopoulos and Segerstrom (2005). In their model, globalization corresponds to an exogenous increase in the size of the population of the south. Without foreign direct investment (FDI), they find that strengthening IPR protection leads to a permanent increase in the relative wage of the north, to a decrease in the long-run rate of imitation, but to only a short-run decrease in the rate of innovation. In the presence of FDI results are reversed and lead to the conclusion that in order to attract FDI, developing countries must make IPR safer. This will both rise their relative wage rate and attract technology from abroad. Glass and Wu (in press) build a general equilibrium, R&D-based endogenous growth model with the aim of seeing if the difference in the type of innovation might alter the consequences of IPR protection. In their model, an exogenous decrease in the imitation intensity, in a setting in which FDI is costless and innovation takes the form of quality improvements, discourages FDI and reduces the innovative effort of developed countries. On the contrary, when innovation takes the form of an ever-expanding variety of horizontally differentiated products, stronger southern IPR protection encourages FDI and spurs investment in R&D. Even though this matter has been dealt with extensively, the study of globalizing IPR protection has not yet analyzed the relationship between the strength of IPR protection in developing countries, skill accumulation and within-country wage inequality. A weak technology absorptive capacity has been recognized as perhaps the main problem facing developing countries that want to get nearer to the technological frontier. One the one hand, Benhabib and Spiegel, 1994 and Benhabib and Spiegel, 2005 find empirical evidence that human capital and technological progress are complementary factors in the process of growth and development, and that the adoption of advanced technologies is often restricted by the availability of particular skills in people. On the other, Maskus (2000) points out that the relationship between IPR protection and the level of economic development is U-shaped, so that low level of IPR protection might be growth-improving for economies at an early stage of economic development.1 In such a case, imitation turns out to be more effective than innovation in bridging the technology gap, so that human capital is what matters for developing economies to be able to absorb and adapt foreign knowledge and catching-up with an ever-moving technological frontier. In this paper, I explore the role played by IPR in enhancing the long-run rate of innovation and giving incentives to private agents in developing countries to acquire skills and education to enable them absorb and implement foreign technological knowledge. The key assumption is that in the south skilled workers perform R&D tasks with the main goal of absorbing foreign technology and adopting it to replicate existing northern firm's product. With respect to the standard literature, this paper introduces two further important modifications. First, the model does not present scale problems in the balanced-growth path (BGP) and generates a non-explosive long-run rate of growth. Second, the industry strategic setup is such that all industry leaders find it optimal to charge the same markup over their own marginal cost, independent of where the previous industry leader resides. In the absence of FDI, I find that stronger IPR induce no change in the long-run innovation rate, hurt the rate of technology transfer, and increase the relative unskilled wage of the north. In terms of human capital accumulation and within-country wage inequality, I find that strengthening IPR protection in the south leads to a fall in the northern supply of skilled labor and to an increase in the within-country wage inequality. In the south, the balanced-growth equilibrium effect is twofold and has both microeconomic and macroeconomic implications. At the industry level, stronger IPR regimes generate an increase in the productivity of skilled workers that reduces the demand for skilled labor and reduces the R&D employment per industry. At the aggregate level, the impact depends on the externality that skill accumulation generates in the process of education. In presence of FDI, I find that no northern producer will be willing to engage in FDI when the level of local skill is very low and the cost of human capital is very high. In this case, strengthening IPR protection is ineffective in attracting foreign technology through FDI. On the contrary, when local skill is high and its cost is sufficiently low, stronger IPR protection turns out to be a useful tool in attracting foreign technology through FDI. Specifically, I find that strengthening IPR protection reduces the flow of technology coming from the imitation of imported products while the total impact on the that coming from FDI is ambiguous. The paper develops as follows. Section 2 presents a two country (north–south) innovation-based endogenous growth model in the spirit of Grossman and Helpman (1991) and Glass and Saggi (2002), where both innovation and imitation are rent-seeking activities. Section 3 analyzes the BGP effects of strengthening IPR protection in the south. Section 4 provides an extension of the basic model by introducing a new source of technology transfer acting through FDI. Finally, Section 5 concludes.

In this paper I have studied the effect of strengthening IPR protection on the rate of innovation, the rate of technological transfer, and the incentives to skills accumulation, in an open-economy, R&D based growth model. I found that a stronger IPR regime in the south has only a temporary effect on the worldwide innovation rate, whereas it undoubtedly hurts the rate of technology transfer via a permanent fall in the long-run rate of imitation. In the north, strengthening IPR protection in the south leads to a permanent decrease in the local level of skill due to a reduction in individuals' incentive to acquire education, and generates an increase in the northern skill premium that, in turn, exacerbates the domestic wage inequality. In the south, the balanced-growth equilibrium effect of strengthening IPR protection is twofold and has both microeconomic and macroeconomic implications. The microeconomic effects are negative and lead to a reduction in the industry-wide R&D employment, whereas the macroeconomic effects are positive and turn out to depend on the externality that skill accumulation generates on the process of education. When the externality is higher than a threshold, more IPR protection in the south increases the BGP stock of skills and reduces the within-country wage inequality. On the contrary, when the externality is lower than the threshold, stronger IPR protection scales down the BGP stock of skills and increases the within-country wage inequality. In an extension of the model, I have also shown that when two different sources of technology transfer (imitation and FDI) are present in the BGP, skills play a crucial role in attracting inflow FDI, and strengthening IPR protection in the south may be ineffective in attracting technological knowledge to those economic systems in which the level of local skills is low and the cost of the existing human capital is too expensive to encourage northern producers to adapt their technology for the south. Whenever local skills are affordable, I found that strengthening IPR protection shrinks the flow of technology from imitation of imported products while generates mixed effects for that from FDI.