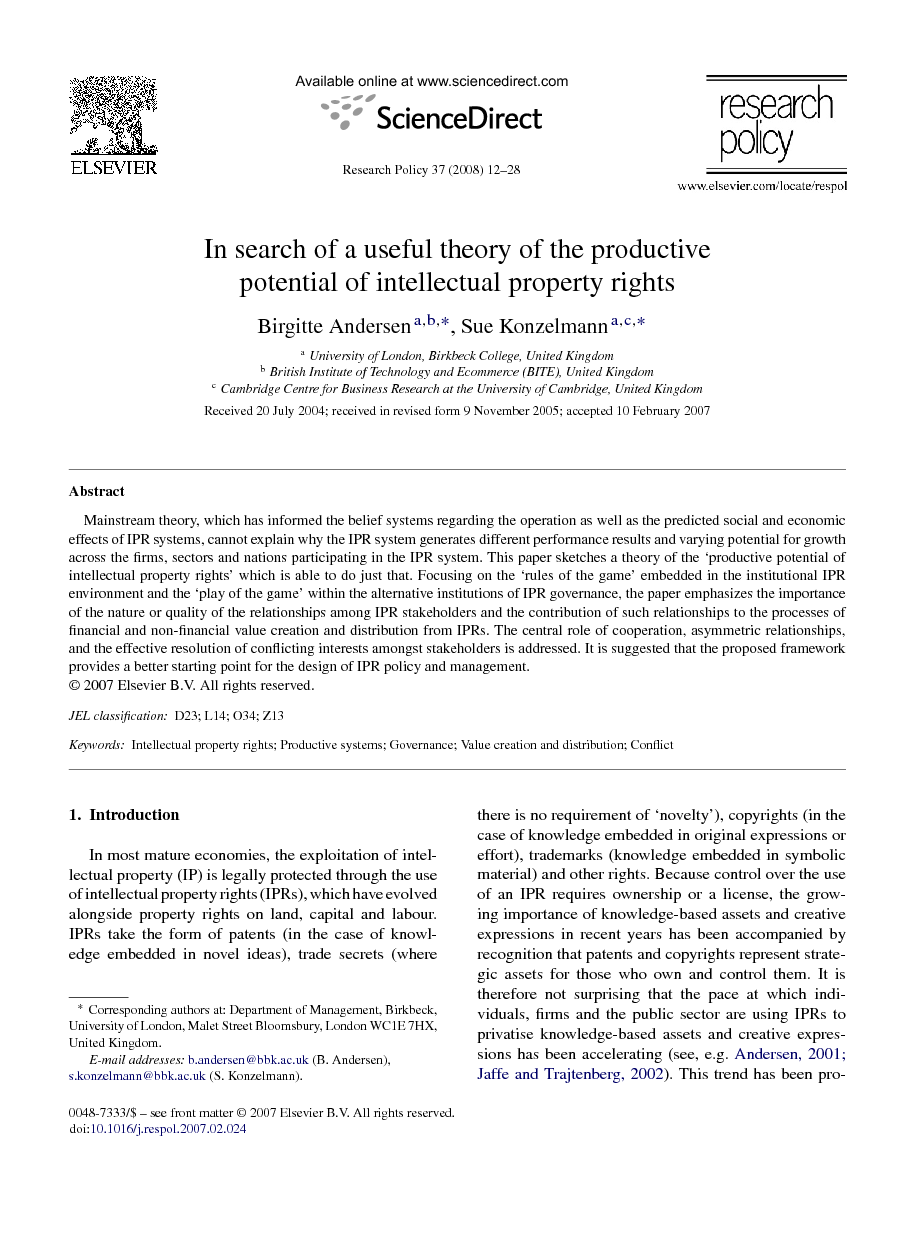 Mainstream theory, which has informed the belief systems regarding the operation as well as the predicted social and economic effects of IPR systems, cannot explain why the IPR system generates different performance results and varying potential for growth across the firms, sectors and nations participating in the IPR system. This paper sketches a theory of the ‘productive potential of intellectual property rights’ which is able to do just that. Focusing on the ‘rules of the game’ embedded in the institutional IPR environment and the ‘play of the game’ within the alternative institutions of IPR governance, the paper emphasizes the importance of the nature or quality of the relationships among IPR stakeholders and the contribution of such relationships to the processes of financial and non-financial value creation and distribution from IPRs. The central role of cooperation, asymmetric relationships, and the effective resolution of conflicting interests amongst stakeholders is addressed. It is suggested that the proposed framework provides a better starting point for the design of IPR policy and management.

In most mature economies, the exploitation of intellectual property (IP) is legally protected through the use of intellectual property rights (IPRs), which have evolved alongside property rights on land, capital and labour. IPRs take the form of patents (in the case of knowledge embedded in novel ideas), trade secrets (where there is no requirement of ‘novelty’), copyrights (in the case of knowledge embedded in original expressions or effort), trademarks (knowledge embedded in symbolic material) and other rights. Because control over the use of an IPR requires ownership or a license, the growing importance of knowledge-based assets and creative expressions in recent years has been accompanied by recognition that patents and copyrights represent strategic assets for those who own and control them. It is therefore not surprising that the pace at which individuals, firms and the public sector are using IPRs to privatise knowledge-based assets and creative expressions has been accelerating (see, e.g. Andersen, 2001 and Jaffe and Trajtenberg, 2002). This trend has been promoted by a growing number in industry, government and international agencies who argue that the privatisation of the intellectual capital and knowledge-based assets of individuals and firms offers many advantages. Large firms have reported extraordinary corporate results from using the IPR system.1 The great expectations of policy-makers regarding the contribution of the IPR system to performance in the knowledge-based economy have been exposed by an increased enforcement of IPR regimes worldwide. Such initiatives include (among others): the Trade Related Aspects of the Intellectual Property Section (TRIPS) of the World Trade Organization (WTO); patent protection even beyond science-based principles (for example business methods and other computer-implemented inventions); exclusive rights on fundamental inventions (for example university science and procedures to obtain genetic codes); exclusive rights on traditional knowledge and traditional cultural expressions; increased privatisation of the public domain; increased period of protection; protection of trivial knowledge with very little inventive step. Nevertheless, IPR policy encouraging increased enforcement has been largely based on the vision of policy-makers rather than on the findings of solid empirical research; and within the IPR research community, the social and economic effects of tightening the IPR system are not considered obvious.

This paper has sketched a framework for understanding (i) how the total value realized from IPRs may be below its potential, (ii) how the value realized may not be distributed among the participants in the IPR system in proportion to their value-added, breaking down potentially productive relationships, and (iii) how the value realized may not exceed the direct and indirect costs of upholding and participating in the IPR system. In all such cases, the IPR system becomes unproductive for all or most participants as the system merely functions as a means of taking knowledge and creative expressions out of productive use without creating and distributing any substantial surplus value for the achievement of IPR-related individual, corporate and societal objectives. Most IPR policy initiatives and patent office granting procedures, as well as in some cases even corporate management, tend to be more concerned with the privatisation of knowledge bases and creative expressions in the form of IPRs than they are with understanding how the value from IPRs is realized and distributed. This is assumed to be automatic. However, as shown in this paper, value from IPRs is not created in isolation but through productive collaboration between stakeholders seeking different types of value from IPRs. Productive problem-solving of legitimate and predictable conflicts of interest among the participants, especially over distributional shares of the value created, is important for realising the productive potential of the IPRs. In this context, the institutional IPR environment is not necessarily shaped by rational criteria (of the kind we find in mainstream theory) with respect to optimising legislation for society. Moreover, IPR governance is not necessarely based upon a criterion of optimising the value realized from IPRs. Rather, the organization of an IPR system at any one time is based upon a particular constellation of interests and power structures. The productive systems approach offers an alternative framework for the analysis of economic relationships and outcomes, in which there is no real difference between micro- and macro-economic analysis. IPR system performance is determined by the interaction between (i) the performance of the IPR environment, and (ii) the performance of the institutions of IPR governance. Given the interaction between the two, an important aspect of the nature of the ‘play of the game’ is the influence of the ‘rules of the game’ on the quality of relationships among the players and IPR systems stakeholders. The ‘rules of the game’ influence the ways in which firms and individuals create financial and non-financial value from IPRs, and how this value is distributed. The players in the institutions of IPR governance in turn evolve and interact as stakeholders within the IPR environment in a co-evolutionary process when setting the rules of the game. Thus, the social and economic effects of the IPR system do not represent aggregate or disaggregate behaviour. Instead, outcomes are the result of a dynamic process characterized by complicated and interactive stakeholder relationships, with interaction and feedback effects across the various levels of analysis. To make a general point, the ‘institutional IPR environment’ and the ‘institutions of IPR governance’, as well as their interaction, have implications for the performance of IPR systems, at the levels of individuals, firms, sectors, countries and global economies. We propose that the framework sketched in this paper provides a better starting point for policy-makers and strategic management with regard to solving practical IPR performance-related problems. To test and refine the analytical framework proposed here, further detailed empirical research examining the institutions underpinning the IPR system in different organizational, industry and national contexts is essential.