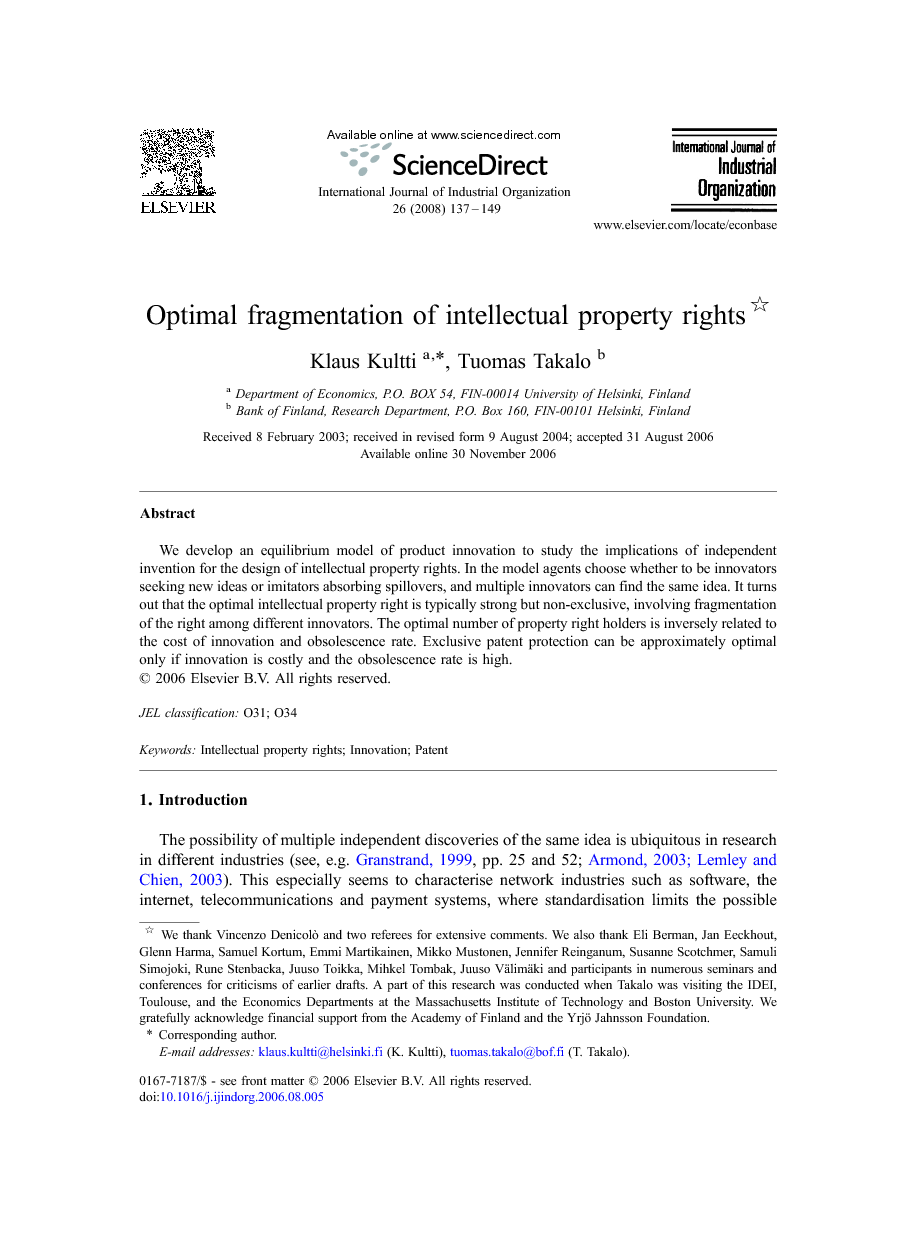 We develop an equilibrium model of product innovation to study the implications of independent invention for the design of intellectual property rights. In the model agents choose whether to be innovators seeking new ideas or imitators absorbing spillovers, and multiple innovators can find the same idea. It turns out that the optimal intellectual property right is typically strong but non-exclusive, involving fragmentation of the right among different innovators. The optimal number of property right holders is inversely related to the cost of innovation and obsolescence rate. Exclusive patent protection can be approximately optimal only if innovation is costly and the obsolescence rate is high.

The possibility of multiple independent discoveries of the same idea is ubiquitous in research in different industries (see, e.g. Granstrand, 1999, pp. 25 and 52; Armond, 2003 and Lemley and Chien, 2003). This especially seems to characterise network industries such as software, the internet, telecommunications and payment systems, where standardisation limits the possible paths for future technologies and so firms concentrate their R&D activities on the same fields. Similar views are expressed by Rahnasto (2003) and Varian, Farrell and Shapiro (2004). Rahnasto (2003), in particular, argues that simultaneous innovation has resulted in fragmentation of intellectual property rights (IPRs) in these industries. As a result, products and services in network industries are based on combinations of IPRs that are held by multiple owners. Because of the hold-up power conferred to a single patent holder, it has been suggested that fragmentation retards the use of innovations. The discussion has, however, mainly been concerned with vertical fragmentation in the chain of innovations. We develop an equilibrium model of product innovation to study the horizontal fragmentation of IPRs, which means that more than one inventor of the same technology obtains the right to use it. Because such fragmentation renders the market for new products more competitive, it should stimulate the use of innovations rather than retard it. We find that optimal IPRs are strong and perpetual but typically non-exclusive. The cheaper the innovation, the larger the number of property right holders that should be granted for an innovation. Exclusive patent protection is approximately optimal only if innovation is very costly. Related to optimal fragmentation of IPRs is the question of whether independent invention should be a defence to infringement. A key distinction between patents and other forms of IP protection is that only one patent can be awarded even in the case of several independent developments of the same idea, whereas other forms recognise the rights of independent inventors. In the seminal analysis of independent invention with IPRs Wright (1983) advocates “marginal patents” that are awarded only in the case of unduplicated innovation, but regards such awards as practically impossible to implement. Closest to our work is La Manna et al. (1989), which presents a patent race model with free entry. They advocate a permissive patent system allowing independent infringements of patents over a given period of time and show that it is welfare-superior to the traditional strict patent system under a wide range of circumstances. A reason is that in the permissive system wasteful duplication of innovation costs is less of an issue, since more innovators lead to more production. This effect is present in our model, but there is also an additional benefit, since more innovators produce a greater number of new products. Another difference compared with La Manna et al. (1989) is that in our model the set of agents is well-specified, and the agents become either innovators who seek ideas or imitators who enjoy spillovers. Our analysis can be seen to provide a robustness check for their partial equilibrium results, because in our model innovators and imitators must fare equally well in equilibrium. This corresponds to the free entry condition of La Manna et al. (1989). Moreover, we distinguish innovations from ideas, consider multiple innovations, clarify how innovators happen to discover the same innovation independently, and determine the expected number of innovators to discover the same innovation. We characterise optimal IP protection, including the optimal number of property right holders, and perform comparative statics analysis. More recent studies of the effects of independent invention on the design of IP policy include Bessen and Maskin (2002) and Maurer and Scotchmer (2002).1 In Maurer and Scotchmer (2002) a patent holder can be threatened by rivals' independent duplication, and such duplication is a defence to infringement. The patent holder, facing an unlimited number of potential licensees but no competing licensors, has an incentive to grant a license to deter duplication. In our model independence of invention is different, as there is no possibility of consciously duplicating already existing innovations.2 It is thus somewhat awkward to investigate licensing, because there may be several patent holders and several (but a limited number of) independent inventors, i.e., potential licensees. Determining the price of the license in this environment would require careful modelling of competing sellers and buyers. Bessen and Maskin (2002) provide a tractable model of cumulative innovation where in each period two firms compete to make an improvement on an existing innovation. They compare patents to a system without IPRs. Since the firms must obtain access to the original innovation to be able to make an improvement, patents create hold-up power over subsequent innovations. Thus, a system without IPRs may generate more innovation than the patent system. Our work can be considered complementary to Bessen and Maskin (2002). Although we do not allow for cumulative innovation, we do consider the optimal number of property right holders over one generation of innovation. Even in the absence of cumulative innovation, it is in general optimal to have multiple property right holders to foster competition in the market for new products. We present the model in Section 2. In Section 3 we determine the optimal form of an IPR. The concluding remarks are in Section 4.

Independent invention is frequent in practice, perhaps increasingly so. In such an environment, IPRs have complex welfare effects. To examine them, we develop an equilibrium model of product innovation where multiple innovators may discover the same idea. In our model there are two sectors, innovation and imitation, whose sizes are determined in equilibrium. A key implication of the model is that duplication of innovation cost increases the numbers of new products and potential producers per product. Since the IPR regime determines the actual number of producers per product, it also determines the wastefulness of duplication. Independent of IPR regime, cost duplication is not wasteful if innovators come up with different innovations. But in the case of multiple discovery, fragmenting the IPR among several producers involves less wasteful duplication than any exclusive system. Fragmentation is also a more efficient way to increase production than is reducing the strength of an IPR, because it dilutes the incentive to innovate less. For example, a weak patent system benefits competitors irrespective of whether they are innovators or imitators while fragmentation benefits the innovators more. Thus the optimal IPR is typically non-exclusive. The cheaper the innovation and the lower the obsolescence rate, the higher should be the optimal number of property right holders for an innovation. Bold interpretation of our findings argues against the expansion of patentability of software and business methods. Since software and business method innovations are relatively cheap, independent invention should be a defence to infringement. Our model predicts that the expansion of software and business method patentability not only restricts post-innovation competition but can also weaken the incentive to innovate. According to Bessen and Hunt (2004), this is what the data from software industry indicate. However, our results do not necessarily suggest abolition of the patent system. The patent system could be modified to recognise the rights of independent inventors or the patent authorities could auction off some additional patents for each innovation. Here our findings support some reforms of preliminary injunction practice and first-to-invent rule of the US patent system, as proposed by Armond (2003) and Lemley and Chien (2003). Because priority disputes often deal with independent inventors, the disputes could be resolved by granting patents to all genuine innovators. We also find that the patent system is approximately optimal if the cost of innovation or obsolescence rate is sufficiently high. The conclusion is well in line with the related literature. In La Manna et al. (1989) the patent system can be superior to the permissive system if the production economics of scale are large. Waterson and Ireland (1998) find that a patent system can dominate copyrighting only if production innovation is expensive and, for Maurer and Scotchmer (2002), independent-invention defence is not welfare enhancing if the cost of innovation is sufficiently higher than the cost of duplication. There are issues that our model fails to address. Here the size of the innovative sector and number of innovations are determined in equilibrium. This effect is missing in partial equilibrium models of innovation. But in a richer model the demand functions would be derived from utility maximisation subject to given resources. Another important issue beyond the scope of this study is cumulative innovation, as we concentrate on the stationary equilibrium where innovations do not build on previous innovations. Therefore, we miss a dynamic effect, which should be incorporated into any complete model of fragmentation of IPRs. Allowing for sequential innovation and vertical fragmentation would emphasise the problems stemming from the hold-up power gained by a single IPR holder. Such hold-up power of patent holders in the cumulative innovation context is used as an argument against the patent system. That we find arguments against exclusive patent rights without recourse to cumulative innovation is noteworthy.