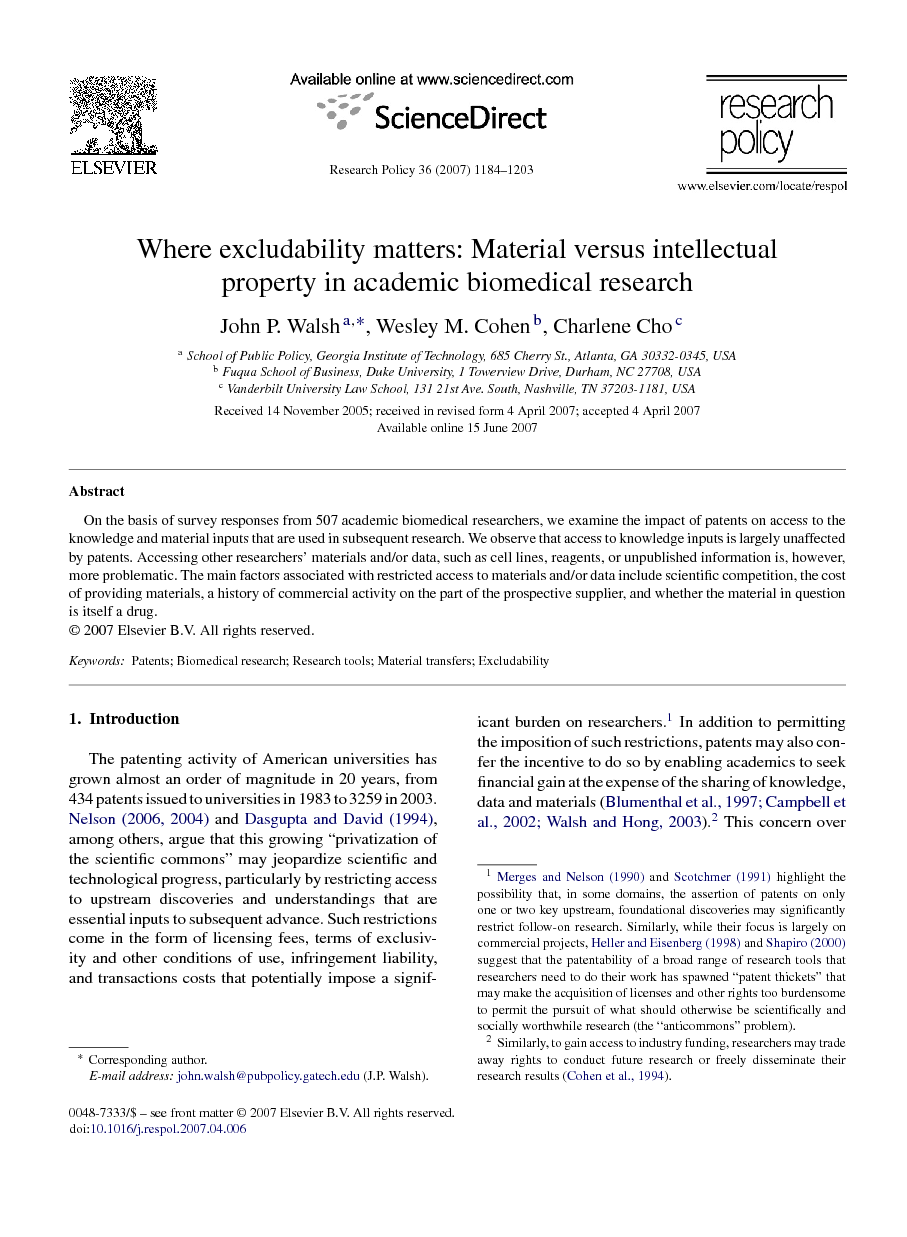 On the basis of survey responses from 507 academic biomedical researchers, we examine the impact of patents on access to the knowledge and material inputs that are used in subsequent research. We observe that access to knowledge inputs is largely unaffected by patents. Accessing other researchers’ materials and/or data, such as cell lines, reagents, or unpublished information is, however, more problematic. The main factors associated with restricted access to materials and/or data include scientific competition, the cost of providing materials, a history of commercial activity on the part of the prospective supplier, and whether the material in question is itself a drug.

The patenting activity of American universities has grown almost an order of magnitude in 20 years, from 434 patents issued to universities in 1983 to 3259 in 2003. Nelson, 2006 and Nelson, 2004 and Dasgupta and David (1994), among others, argue that this growing “privatization of the scientific commons” may jeopardize scientific and technological progress, particularly by restricting access to upstream discoveries and understandings that are essential inputs to subsequent advance. Such restrictions come in the form of licensing fees, terms of exclusivity and other conditions of use, infringement liability, and transactions costs that potentially impose a significant burden on researchers.1 In addition to permitting the imposition of such restrictions, patents may also confer the incentive to do so by enabling academics to seek financial gain at the expense of the sharing of knowledge, data and materials (Blumenthal et al., 1997, Campbell et al., 2002 and Walsh and Hong, 2003).2 This concern over the impact of patenting on the free flow of knowledge in academic science remains of paramount concern even while numerous scholars acknowledge that academic patenting may strengthen firms’ incentives to invest in the downstream activities and resources necessary to commercialize discoveries of academic origin. This paper examines the impact of patent rights on academic researchers’ access to the knowledge and material inputs upon which their research depends—what are broadly termed, “research tools.” On the basis of a survey of 507 academic researchers in genomics and proteomics, we probe the determinants of project choice, and examine the question of access to research knowledge and material inputs, which is the main focus of our study. Our analysis relies on two samples of academic respondents. The first is a random sample of 414 academic researchers (including those in universities, non-profits or government labs). We also collected data from a second sample of 93 academic scientists who are conducting research on one of three important signaling proteins (CTLA-4, EGF and NF-kB), fields that were chosen because they all are the subject of extensive patenting activity by numerous actors and offer the promise of significant commercial gain; that is, they are characterized by conditions that are likely to spawn problems of research input access. The rationale for this more focused sample is that even if one finds little problem of access in a random sample, social welfare impacts could still be great if access is impeded in just one or two particularly important areas of research. This paper builds upon the authors’ prior work. Based on interviews with a limited number of biomedical researchers,3Walsh et al. (2003) found that, despite numerous patents on upstream discoveries, researchers have been readily able to access knowledge inputs. In addition to the typical solutions of contracting and licensing, biomedical researchers have implemented a variety of “working solutions” that commonly included the disregard – often unknowing – of patents on research tools. When questioned about possible infringement of research tool patents, academic researchers commonly suggested that they were protected by a “research exemption” from infringement liability. The Madey v. Duke decision of 2002 raised anew, however, the question of the impact of research tool patents on academic biomedical research by clarifying what many had argued had long been the case—that there was no general research exemption shielding academic researchers in biomedicine or any other field from infringement liability ( Eisenberg, 2003). This very visible decision, sample limitations on our prior work, and continuing concerns that the ever-growing number of patents may be impeding academic science prompted the current effort. While Walsh et al., 2005a and Walsh et al., 2005b presents a brief summary of our findings, the current paper examines more thoroughly the impact on academic biomedical research of patents and limits on access to tangible research inputs. For example, we consider whether the Madey v. Duke decision has affected access to patented discoveries, and also whether such restricted access causes delays, increased costs, or the redirection of research. We also examine: restrictions on access to material inputs broken down by type of input requested; the terms and impacts of material transfer agreements; and the extent to which patenting affects the ability to create the material input oneself. To the extent that we observe restricted access to either intellectual property or materials, we probe not only the role played by IP, but also the roles played by commercial incentives, burden of compliance, and scientific competition ( Hagstrom, 1974 and Walsh and Hong, 2003). Indeed, the policy implications attendant upon any social costs associated with restricted access will depend importantly on its source. To prefigure our main findings, we observe that access to knowledge inputs is largely unaffected by patents, even in our more focused sample. More problematic is access to materials and/or data possessed by other researchers, such as cell lines, reagents, genetically modified animals, unpublished information, etc. Restrictions on access, however, do not appear to turn on whether the material is itself patented. Rather, such restrictions are more closely associated with scientific competition, the cost of providing materials, a history of commercial activity on the part of the prospective supplier, and whether the material in question is itself a drug.