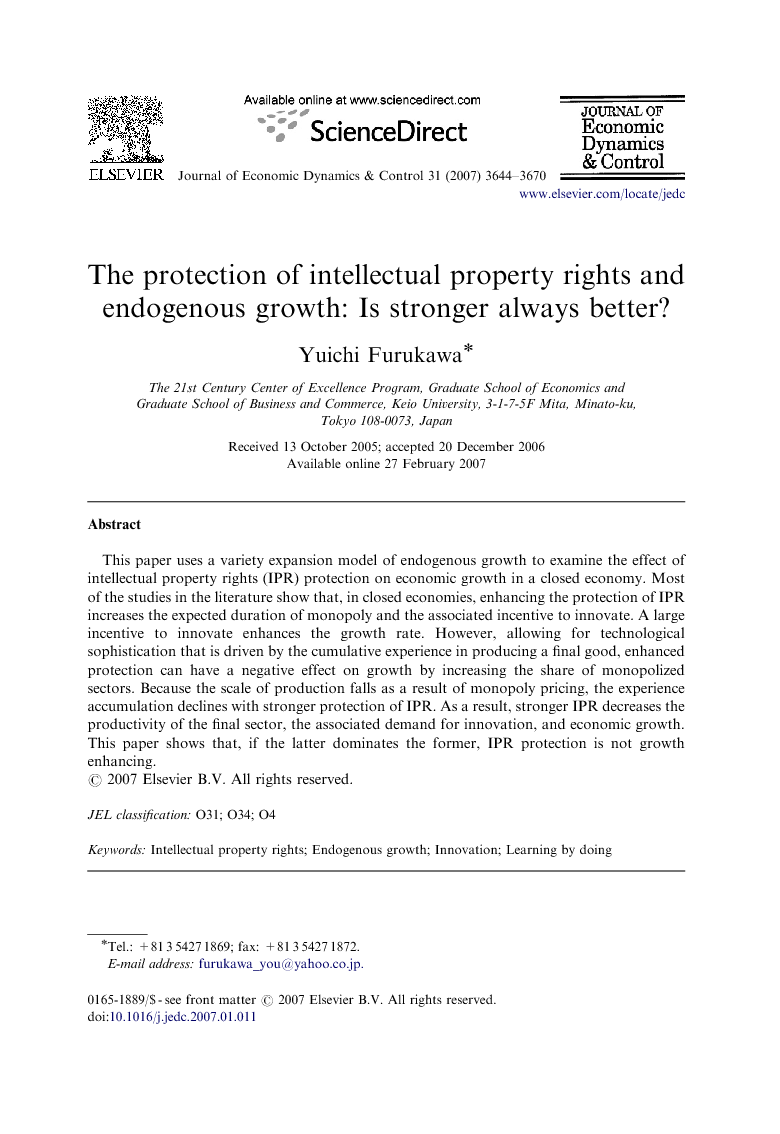 This paper uses a variety expansion model of endogenous growth to examine the effect of intellectual property rights (IPR) protection on economic growth in a closed economy. Most of the studies in the literature show that, in closed economies, enhancing the protection of IPR increases the expected duration of monopoly and the associated incentive to innovate. A large incentive to innovate enhances the growth rate. However, allowing for technological sophistication that is driven by the cumulative experience in producing a final good, enhanced protection can have a negative effect on growth by increasing the share of monopolized sectors. Because the scale of production falls as a result of monopoly pricing, the experience accumulation declines with stronger protection of IPR. As a result, stronger IPR decreases the productivity of the final sector, the associated demand for innovation, and economic growth. This paper shows that, if the latter dominates the former, IPR protection is not growth enhancing.

This paper investigates the effects of IPR protection on economic growth in a variety expansion model of endogenous growth. The crucial assumption is that experiences accumulate on using machinery. This assumption generates a negative relationship between tightening IPR and growth, in contrast to most models in the existing literature on growth and IPR protection. The logic behind this interesting result is as follows. Tightening IPR increases the fraction of monopolized sectors. Experience accumulation decreases with a greater number of monopolized sectors, because production levels are lower in a monopolized sector than in a competitive sector. This implies smaller demand for new intermediate goods, which leads to a lesser incentive to innovate. The result of this paper is that the relationship between IPR protection and innovation has an inverted-U shape when the impact of accumulated experience on productivity is large enough. This result suggests a role for relaxing IPR protection as a growth-enhancing policy. Due to the inverted U-shaped relationship between IPR protection and growth, both too strong and too weak protection hurts innovation and the resulting growth: instead, a balanced approach is required for growth. This can provide insight into the role of IPR protection in economic growth, a topic often raised in public policy discussions. This paper also shows that the equilibrium growth rate can be maximized when there is no IPR protection if the natural rate of imitation, which is determined by the economy's fundamentals, is low enough. Therefore, preferred growth-enhancing policies can vary across countries with different potential imitation rates: in countries where imitation hardly takes place, there is no need to protect IPR for innovation and economic growth.