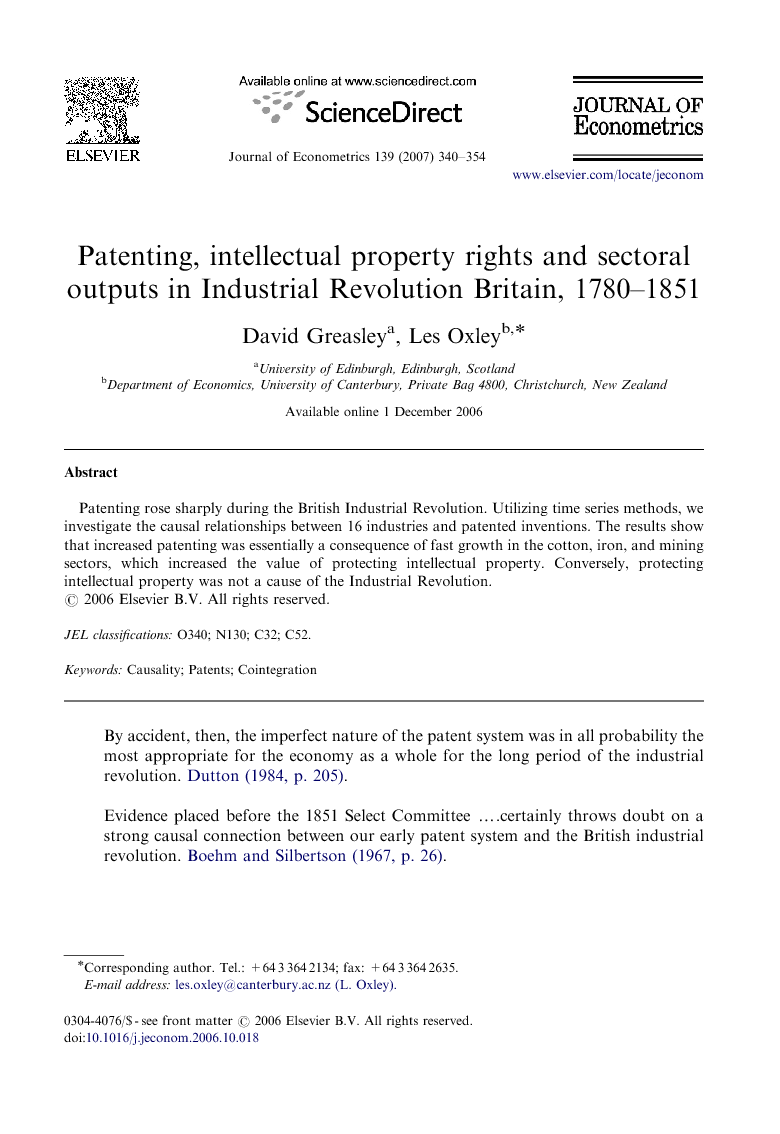 Patenting rose sharply during the British Industrial Revolution. Utilizing time series methods, we investigate the causal relationships between 16 industries and patented inventions. The results show that increased patenting was essentially a consequence of fast growth in the cotton, iron, and mining sectors, which increased the value of protecting intellectual property. Conversely, protecting intellectual property was not a cause of the Industrial Revolution.

Patenting has a long history. Machlup and Penrose (1950) note that a rather well developed patent system existed in Venice in the 15th century, and that the practice of granting monopoly privileges to inventors by the Crown or by city states was followed in many parts of Europe in the 16th and 17th centuries. In England the granting of patents under royal prerogative led to the Statute of Monopolies of 1624. Others followed with France and the USA enacting patent laws in 1791 and 1793, respectively. Historians’ judgements of the precocious English patent system's consequences are mixed. Some, including Fox (1947) associate the patent system in England with the Industrial Revolution. MacLeod (1988, p. 198) takes a more cautious approach, noting that the concept of “intellectual property” for technical invention was a late development, first mentioned in a pamphlet of 1712. After that the term re-appears sporadically in patent applications, before being enshrined in the Act extending James Watt's patent in 1775, “his property in the said application secured”. Ironically, Dutton (1988, 2004) argues that the imperfect British patent system may have approached the ideal. Inventors paid heavily, and separately in England, Scotland, and Ireland, for the temporary (14 years in the first instance), and uncertain privileges since intellectual property “rights” depended on court decisions. British patents offered some protection to inventors, but did not provide complete barriers to access and use by others. This, argues Dutton, was most appropriate for the economy as a whole during the Industrial Revolution. The balance eventually swung in favor of patentees. Sullivan (1989, p.436) attributes increased patent activity after 1830 to patentees favorable treatment in the courts. Yet the system before the reforms of 1852 remained cumbersome and administratively expensive. Whether the property rights afforded to inventors during the Industrial Revolution levered technological and industrial progress is, on the basis of the historiography, unclear. The reverse interpretation, that the growth of patenting after 1760 followed industrial development, does appear in the literature. Ashton (1948) postulates that the timing and the direction of Industrial Revolution patenting activity was influenced by economic conditions, including prices, costs, and interest rates. Our chief purpose lies in putting the debates surrounding the protection of inventors’ property and the Industrial Revolution on a firmer statistical footing, by articulating the direction of the causal linkages between patents and sector industrial growth in Britain, 1780–1851. Historians are divided on the sectoral-pervasiveness of Industrial Revolution technological progress. O’Brien (1993), Harley (1993), and Crafts (1985) argue that technological progress was localized in the cotton and iron industries. Alternatively, Temin (1997), and Landes (1969) see the Industrial Revolution as broadly based. McCloskey (1988) adopted an intermediate position, claiming that around 46% of economy-wide productivity growth arose outside the “modernized sectors”. The linkages between patents, as a measure of “protected” inventive activity, and the disaggregate record of British industrial growth between 1780–1851, have the potential to inform the debates surrounding historians’ conceptualizations of the Industrial Revolution. The extent, if any, to which the effects of patented inventions spilled through the industrial economy will show how protecting inventors’ property rights impinged on the economy-wide adoption of new technology. Conversely, the statistical causality tests will also show if patenting activity was stimulated by particular industrial sectors. In a series of papers, Greasley and Oxley, 1994, Greasley and Oxley, 1996 and Greasley and Oxley, 1997a use modern time series econometric methods and macro-level real total industrial production data, to identify the origins and likely ‘end’ of the British Industrial Revolution, dating the period as 1780–1851. Using traditional Granger-type and more recently Toda and Phillips (1991), Toda and Yamomoto (1995), Greasley and Oxley (1997b), and Oxley and Greasley (1997) consider possible causal linkages between industrial production and other aggregate level data that have traditionally been identified in the economic history literature as potential candidates for ‘drivers/engines of growth’. The candidates included real wages, imports, exports, population, patents, and affected production processes. In that work, typically bi-directional causality between patents (levels or growth rates) and industrial production (levels or growth rates) was identified. Greasley and Oxley (2000) also consider the sector interrelatedness of industrial growth, and thus the pervasiveness of technological progress during the Industrial Revolution, utilizing cointegrating relationship methods and tests for common stochastic trends to sector-level data. They conclude that Industrial Revolution technological progress spread widely, but unevenly. From a time series perspective, the productivity shocks shaping cotton and iron goods output defined the profile of early British industrialization. These two key industries shared a common stochastic trend with a wide group of mining and metal industries, and had long run causal links to shipbuilding, paper, malt, and sugar. The output trends in other industries, notably woollens, linens, flour, and bread, were shown to be isolated from the technological progress driving the cotton and iron goods industries. Here we add to the debates by investigating the causal links between patenting activity and industrial output at the sector level during the period, 1780–1851. Using time series methods we consider the existence of bi- and multi-variate causality between patents and 16 sectors of the British economy. The hypotheses of importance are: 1. Is there evidence that patents caused or were caused by sector outputs? 2. Did patenting activity have pervasive, economy-wide common effects on all sectors or on only some sectors (and vice versa if patenting activity is caused by sector outputs)?