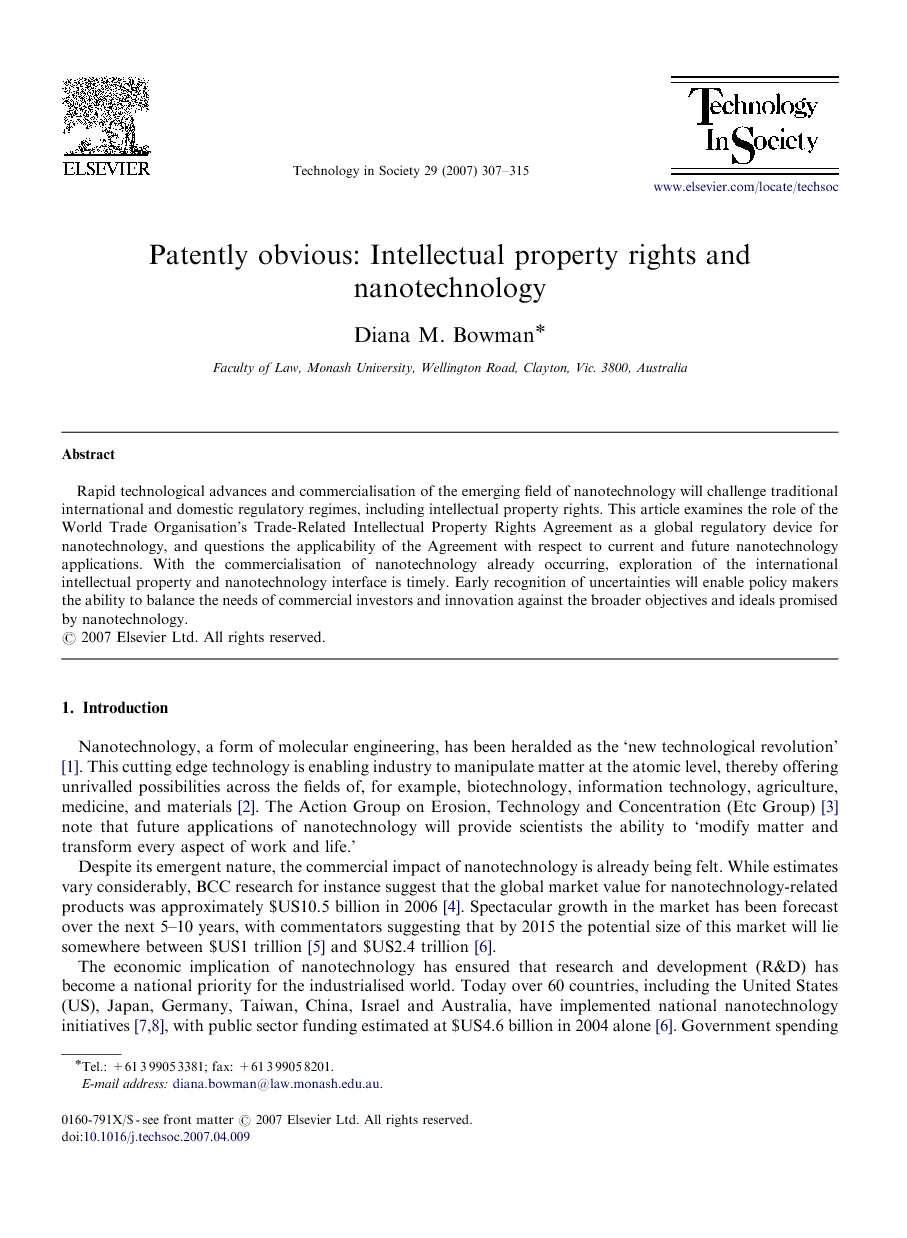 Nanotechnology, a form of molecular engineering, has been heralded as the ‘new technological revolution’ [1]. This cutting edge technology is enabling industry to manipulate matter at the atomic level, thereby offering unrivalled possibilities across the fields of, for example, biotechnology, information technology, agriculture, medicine, and materials [2]. The Action Group on Erosion, Technology and Concentration (Etc Group) [3] note that future applications of nanotechnology will provide scientists the ability to ‘modify matter and transform every aspect of work and life.’ Despite its emergent nature, the commercial impact of nanotechnology is already being felt. While estimates vary considerably, BCC research for instance suggest that the global market value for nanotechnology-related products was approximately $US10.5 billion in 2006 [4]. Spectacular growth in the market has been forecast over the next 5–10 years, with commentators suggesting that by 2015 the potential size of this market will lie somewhere between $US1 trillion [5] and $US2.4 trillion [6]. The economic implication of nanotechnology has ensured that research and development (R&D) has become a national priority for the industrialised world. Today over 60 countries, including the United States (US), Japan, Germany, Taiwan, China, Israel and Australia, have implemented national nanotechnology initiatives [7] and [8], with public sector funding estimated at $US4.6 billion in 2004 alone [6]. Government spending has similarly been matched by private sector investment, with companies such as IBM, NEC, Monsanto and DuPont all racing to share in the profits of next generation scientific developments [3] and [9]. Despite the attention focused on the scientific and commercial potential of nanotechnology, until recently there has been limited debate on the broader legal, regulatory and ethical aspects of nanotechnology [10], [11], [12], [13], [14] and [15]. While many of the patent law and broader intellectual property rights (IPRs) issues raised by nanotechnology at this time are not unique, the current international intellectual property framework, as governed primarily by the World Trade Organisation's (WTO) Trade-Related Intellectual Property Rights (TRIPS) Agreement, was realised at a time when nanotechnology was simply a futuristic aspiration. This paper investigates the regulation of nanotechnology within the context of the current IPRs regime, as governed by the TRIPS Agreement. Following an examination of the phenomena of nanotechnology, this paper explores whether nanotechnology falls within the auspices of Article 27 of the TRIPS Agreement. In doing so, the paper questions the applicability of Article 27 as a regulatory device for nanotechnology, particularly in light of the apparent blurring of the discovery/invention interface. The technicalities of this debate are critical to the scope of IPRs that may be afforded to commercialisation of nanotechnology products. In reviewing this issue, this paper explores the growth in nano-patents and discusses the implications of the US PTO Class 977/Dig 1 with respect to the global harmonisation of nano-related nomenclature. Finally, this paper will argue that the lack of uniform definitions underpinning the granting of IPRs gives rise to the potential for overlapping and conflicting patents claims, and suggests that governments adopt a proactive approach to protect the commercial interests of patent holders.

The advent of nanotechnology promises unequalled control over matter at the atomic and molecular level. The economic and social implications of nanotechnology has prompted countries such as the US, Japan, Taiwan, Australia and numerous countries in the European Union to implement national nanotechnology initiatives in a race to secure a share of the $US1-2.6 trillion global market anticipated by 2015. IPRs will play a pivotal role in establishing the legal boundaries for nanotechnology as it is progressively commercialised. Article 27 of the TRIPS Agreement indicates that the emerging field of nanotechnology falls within the scope of patentable subject matter within international IPRs. While the TRIPS Agreement does not pose any significant challenges to the patenting of current nanotechnology applications, the blurring of the invention/discovery interface and the probable convergence of nanotechnology and biotechnology in the medium term may challenge the current IPRs regime. Of particular concern is the progressive blurring of the invention/discovery interface under Article 27 that may produce uncertainty over the types of nano-products that can be patented. This paper contends that a wide interpretation of Article 27(1) may result in the monopolisation of fundamental molecules and compounds. The early recognition of these concerns should enable policy makers and governments to contemplate the future applications of nanotechnology and tailor the international IP framework accordingly. Conceptually, it may be argued that nanotechnology is not distinct from other earlier technology sectors, including biotechnology, and therefore does not warrant any distinct categorisation. Yet the very broad interpretation and loose definitions used to describe nanotechnology may act to weaken the protection afforded by the current global IPRs framework. The US PTO's proactive approach to protecting ‘prior nanotechnology art’ recognises the sophistication of the area, and may avert costly and time-consuming litigation in the future. It is argued that other nations should take a similarly proactive approach to managing IPRs risk by modify their domestic patent frameworks to specifically recognise nanotechnology-related patents. Early recognition of these issues should provide policy makers and government with the opportunity to implement a comprehensive and effective system to regulate international IPRs within nanotechnology. In doing so countries must recognise the imperative to balance the needs of commercial investors and innovation against the broader objectives and utopian ideals promised by nanotechnology. Regardless of the approach adopted, it is critical that much more deliberation, debate and action, occurs prior to the realisation of second generation nanotechnology applications. Indeed, inactivity of policy makers and government now is likely to result in commercial uncertainty in the future.