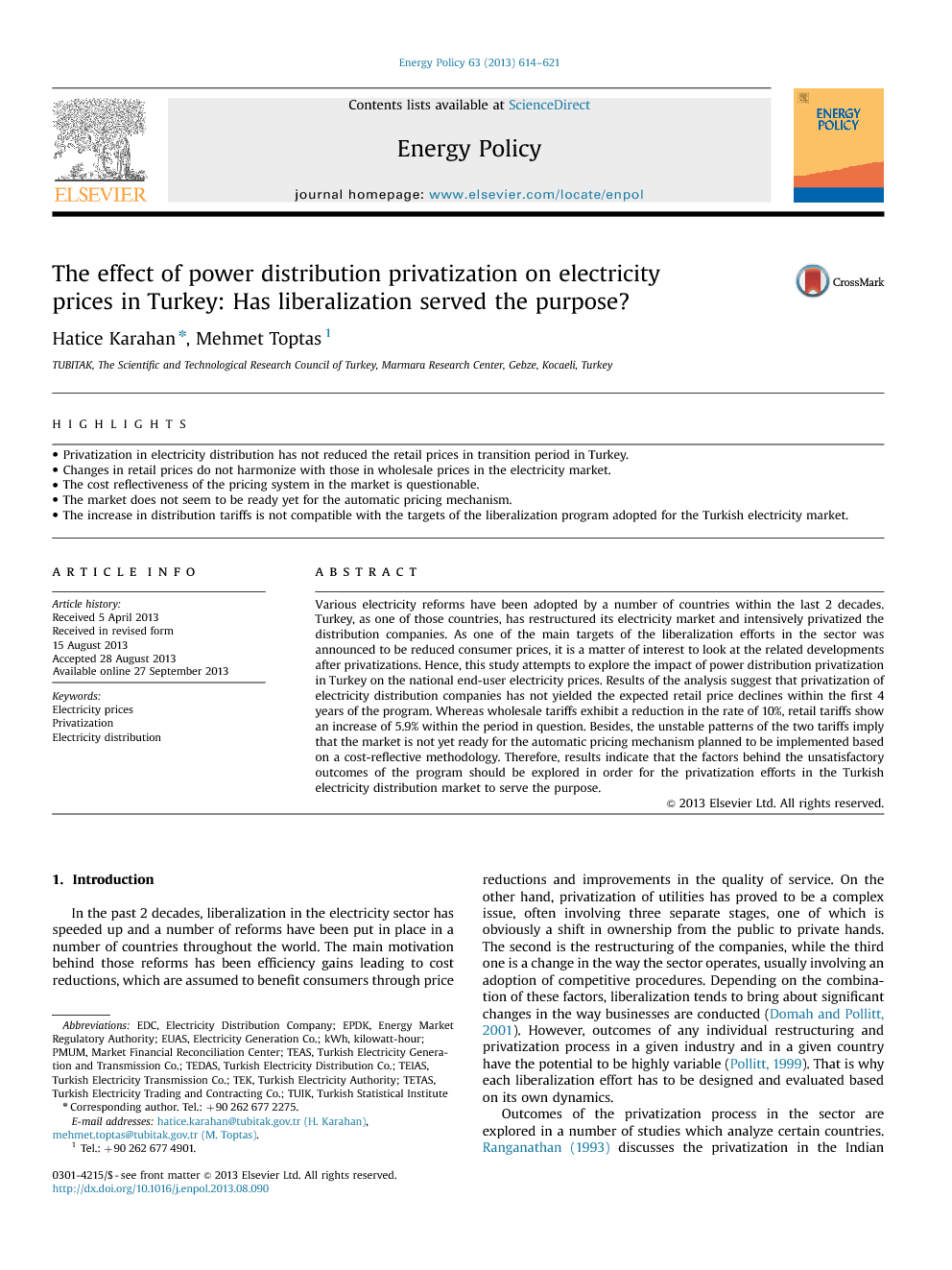 Various electricity reforms have been adopted by a number of countries within the last 2 decades. Turkey, as one of those countries, has restructured its electricity market and intensively privatized the distribution companies. As one of the main targets of the liberalization efforts in the sector was announced to be reduced consumer prices, it is a matter of interest to look at the related developments after privatizations. Hence, this study attempts to explore the impact of power distribution privatization in Turkey on the national end-user electricity prices. Results of the analysis suggest that privatization of electricity distribution companies has not yielded the expected retail price declines within the first 4 years of the program. Whereas wholesale tariffs exhibit a reduction in the rate of 10%, retail tariffs show an increase of 5.9% within the period in question. Besides, the unstable patterns of the two tariffs imply that the market is not yet ready for the automatic pricing mechanism planned to be implemented based on a cost-reflective methodology. Therefore, results indicate that the factors behind the unsatisfactory outcomes of the program should be explored in order for the privatization efforts in the Turkish electricity distribution market to serve the purpose.

The liberalization movement in electricity markets witnessed throughout the world for the last 2 decades was also initiated in Turkey, in 1993. The motivation underlying that movement can be described as lower costs and reduced consumer prices followed by increasing efficiency obtained through the process. The first step realized in this regard was the unbundling of the wholly state-owned electricity sector into two institutions by creating a separate distribution company, namely TEDAS. The next milestone within the scope of the program was the separation of generation, transmission and wholesale functions under three companies in the year of 2001. Hence the sector has been divided into four entities after that year. Further, by the Electric Power Sector Reform and Privatization Strategy Document announced in 2004, the electricity distribution network administered by TEDAS has been divided into 21 areas to be privatized. The main expectation from the program was declared as lower tariffs on consumers due to enhanced productivity and decreased loss and theft. In this framework, a new pricing methodology called Automatic Tariff Mechanism was developed in the meantime to reflect the costs associated on prices. Privatizations in the Turkish power distribution market started in 2009 and by the end of 2011 the number of the privatized companies in the sector has reached 12. With no further privatizations realized in the year of 2012, the number has stayed at the same level as of early 2013. In this sense, it is a matter of interest to explore if the program has attained any outcomes it had targeted within that period of 4 years. Interestingly, however, no studies have been conducted on this critical issue so far. Thus, this study attempts to answer this question by employing an a methodology including certain economic indicators. The key concluding remarks of the study can be summarized as follows: • Although the main goal of the reforms has been achieving price reductions and hence improving consumer welfare, privatization of the electricity distribution market in Turkey has not yet resulted in any price declines on retail (end-user) prices during the transition period. • It is observed that the changes in retail prices do not harmonize with those in wholesale prices. This inconsistency could also be due to the absence of a cost-based pricing mechanism in the distribution sector. In this sense, the Turkish electricity market does not seem to be ready yet for the automatic pricing mechanism which is planned to be put in effect based on a cost-reflective methodology. • The fact that the wholesale prices in real terms have decreased in the relevant period while real retail prices have risen refers to a corresponding increase in the distribution tariffs charged by EDCs, which is not quite compatible with the targets of the program. In sum, this paper brings up a clear portrait that reveals the weak effects of the privatization program in the Turkish electric power distribution industry during the transition period by employing an analysis of certain financial criteria. Thus, it provides an analytical background for evidence-based policy making in the area. Potential reasons underlying the problem that are deliberated in the discussion section of the study would help policy makers tackle the issue in more detail in order to increase the effectiveness of the liberalization policy. Due to data limitation, the methodology and the findings in this paper solely focus on the effects of privatization in the market from the perspective of consumer welfare. As a topic of future research, findings could be enhanced by using a social cost and benefit approach to measure the impact of the privatization on the whole society, including the firms and the government, in case the data needed to evaluate all the aspects of the issue become available.