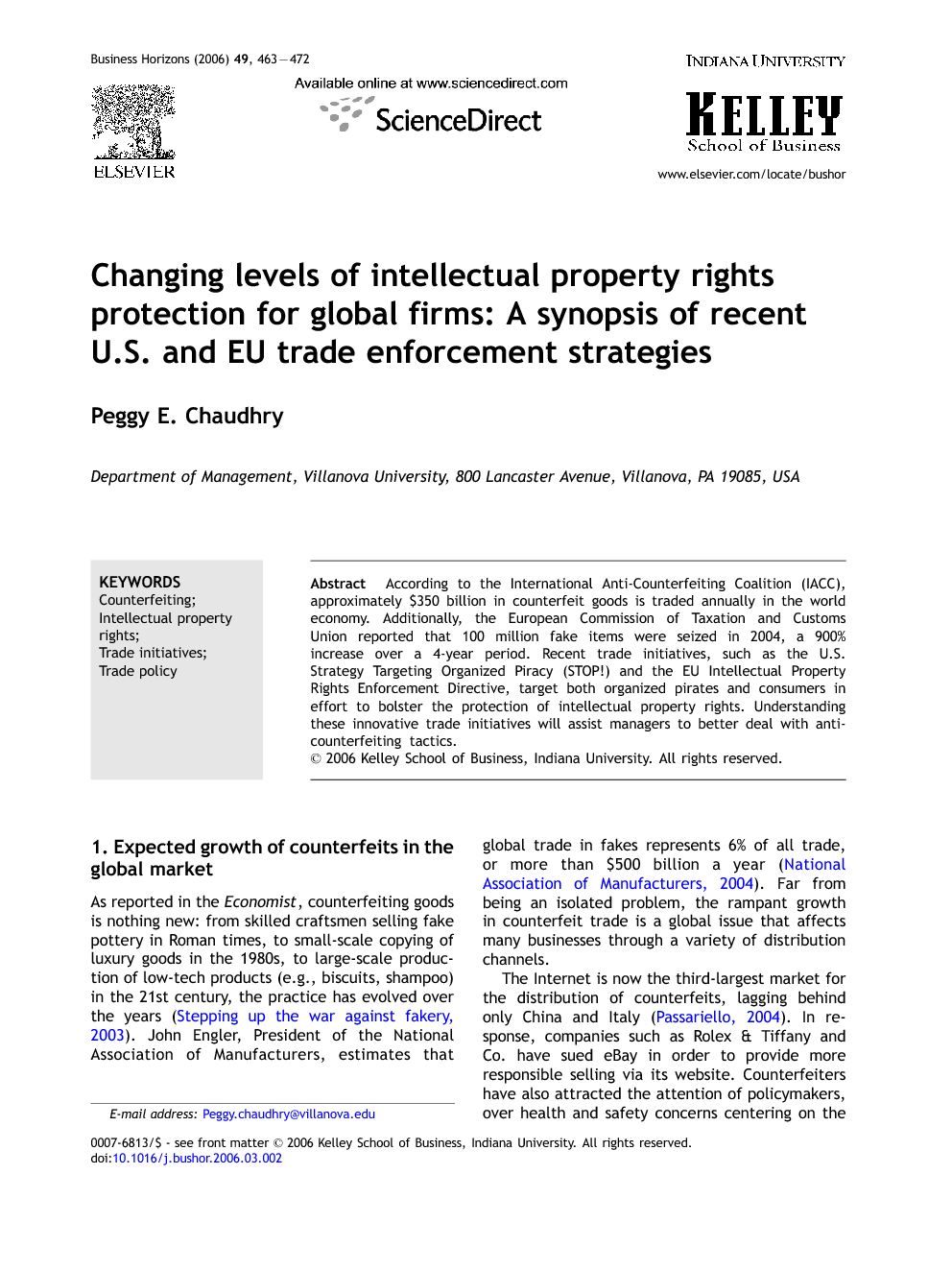 According to the International Anti-Counterfeiting Coalition (IACC), approximately $350 billion in counterfeit goods is traded annually in the world economy. Additionally, the European Commission of Taxation and Customs Union reported that 100 million fake items were seized in 2004, a 900% increase over a 4-year period. Recent trade initiatives, such as the U.S. Strategy Targeting Organized Piracy (STOP!) and the EU Intellectual Property Rights Enforcement Directive, target both organized pirates and consumers in effort to bolster the protection of intellectual property rights. Understanding these innovative trade initiatives will assist managers to better deal with anti-counterfeiting tactics.

As reported in the Economist, counterfeiting goods is nothing new: from skilled craftsmen selling fake pottery in Roman times, to small-scale copying of luxury goods in the 1980s, to large-scale production of low-tech products (e.g., biscuits, shampoo) in the 21st century, the practice has evolved over the years ( Stepping up the war against fakery, 2003). John Engler, President of the National Association of Manufacturers, estimates that global trade in fakes represents 6% of all trade, or more than $500 billion a year ( National Association of Manufacturers, 2004). Far from being an isolated problem, the rampant growth in counterfeit trade is a global issue that affects many businesses through a variety of distribution channels. The Internet is now the third-largest market for the distribution of counterfeits, lagging behind only China and Italy (Passariello, 2004). In response, companies such as Rolex & Tiffany and Co. have sued eBay in order to provide more responsible selling via its website. Counterfeiters have also attracted the attention of policymakers, over health and safety concerns centering on the sale of fake pharmaceuticals, baby formula, airplane parts, and the like. When asked his opinion as to what precipitated government policy makers' increased attention toward curbing counterfeit trade, Jean-René Fortou, former head of the International Chamber of Commerce, cited two major motivations: (1) The rampant growth and scale of the piracy problem, especially since the illicit trade is often related to organized crime; and (2) The alarming increase in counterfeit goods that pose a danger to public health and safety, which changes the perception of a problem previously only associated with the luxury goods sector (Matlock, 2005). One rapidly growing segment of the counterfeit market is pharmaceuticals, an expansion that has not gone unchallenged by federal authorities. Operation Cyber Chase, a sting operation by the U.S. Drug Enforcement Administration, successfully shut down 200 illegal e-pharmacies that were associated with a sophisticated black market industry. Overall, the increase of fake drugs is a result of large profit potential, anonymous distribution channels by way of the Internet, and price-sensitive consumer demand. According to Food and Drug Administration (FDA) official William Hubbard, “some experts are telling us it is more lucrative to sell a counterfeit drug than it is a narcotic such as heroin” (Buzzeo, 2005, p. A20). In October 2004, U.S. Trade Representative Robert Zoellick asserted that: “[T]rade in fake goods is growing, cheating American innovators and producers out of billions of dollars and threatening consumers all over the world with low quality and often unsafe products. This problem crosses many different jurisdictions, laws, and countries…” (Office of the U.S. Trade Representative, 2004). Seizure statistics presented by the U.S. Bureau of Customs and Border Protection (2004) for fiscal year 2005 estimate the value of total confiscated goods at $93.2 million. According to the Business Software Alliance (2004), while $59 billion in commercially packaged software was sold in the global marketplace in 2004, $90 billion was actually installed; furthermore, for every two dollar's worth of software that is legally sold, one dollar's worth is purchased illegally. Over the next 5 years, the BSA predicts that more than $300 billion in software will be sold, and $200 billion will be counterfeited. On February 8, 2005, László Kovács, Commissioner of the Taxation and Customs Union, European Commission, stated that: “Counterfeiting undermines competitiveness, destroys jobs, and threatens the health and security of citizens around the world. EU Customs are in the forefront of this battle and, according to our understanding, seize more fakes than any other enforcement agency in the world” (Kovács, 2005). Mr. Kovács also reported that his agency saw a 900% increase in the number of cases of counterfeits during the period 2000 – 2004, and that the seizures represented just the tip of the fake iceberg, estimated to be worth 400 billion Euros (Kovács, 2005). In 2004, the European Union (EU) experienced rapid growth of counterfeits in the number of cases registered by product type, with seizure data revealing dramatic percentage increases in the sectors of foodstuffs and alcohol (+ 197%), clothing (+ 102%), electrical equipment (+ 707%), and computer equipment (+ 899%) (EU Taxation and Customs Union, 2005). In an effort to curb the problem of counterfeit cigarettes and the subsequent loss of hundreds of millions of dollars in EU government tax revenues, Philip Morris International, Inc., in April 2004, agreed to pay nearly $1 billion over a 12-year period to assist the EU government in developing new procedures to curb the counterfeiting and smuggling of cigarettes in this region (Burgess, 2004).