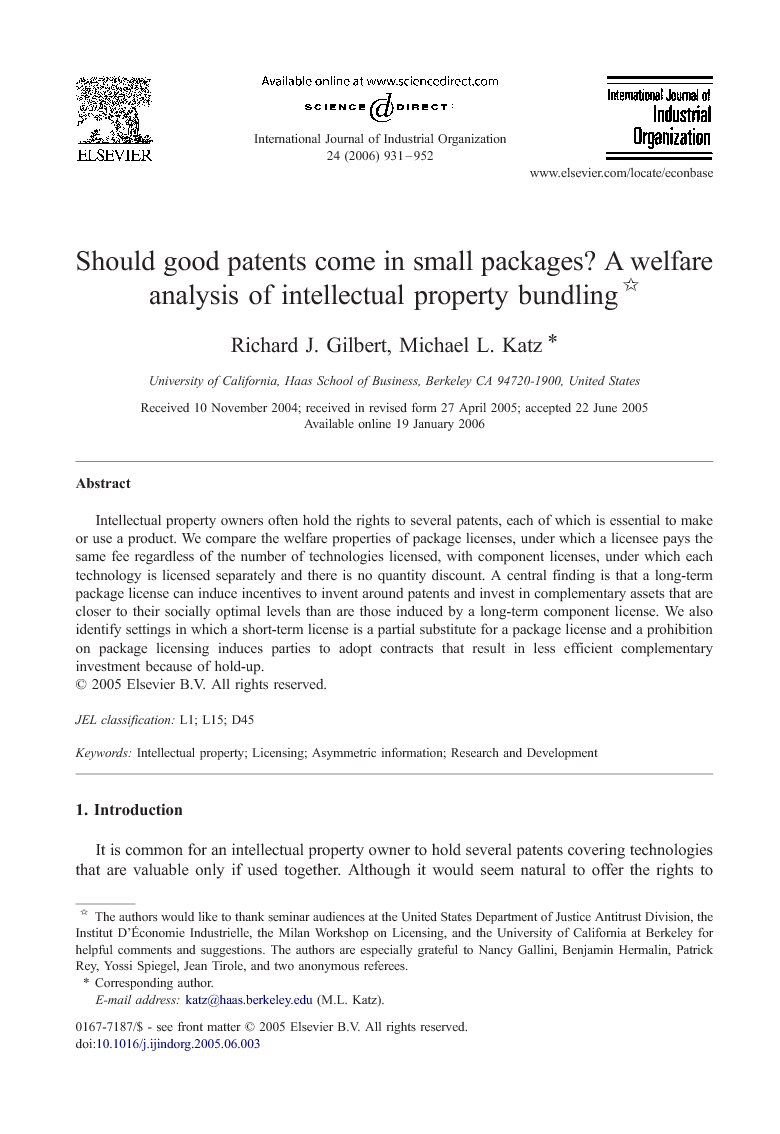 Intellectual property owners often hold the rights to several patents, each of which is essential to make or use a product. We compare the welfare properties of package licenses, under which a licensee pays the same fee regardless of the number of technologies licensed, with component licenses, under which each technology is licensed separately and there is no quantity discount. A central finding is that a long-term package license can induce incentives to invent around patents and invest in complementary assets that are closer to their socially optimal levels than are those induced by a long-term component license. We also identify settings in which a short-term license is a partial substitute for a package license and a prohibition on package licensing induces parties to adopt contracts that result in less efficient complementary investment because of hold-up.

The economic effects of package licenses are more subtle and complex than popular intuition asserts. Although based on strong assumptions, our simple formal model illustrates several broader points that apply to package licensing when the licensor knows the licensee's values of the patents. First, prohibiting package licensing can result in equilibrium contracts that induce inefficient invent-around R&D in situations where package licensing would forestall it. In other cases, the licensee's incentives to innovate may be socially excessive even under package licensing. Second, shorter contracts can be a (partial) substitute for package licensing. For some settings in our model, the IP incumbent can use short-term contracting to adjust its contract offer after the uncertainty about innovation has been resolved and can thus fully exercise whatever market power remains. More generally, this analysis indicates that – absent the ability to engage in packaging – licensors may shorten the length of pricing commitments and thus retain flexibility to respond to changes in the ability to collect fees for specific patents. One of the effects of prohibiting package licensing can thus be to induce the private parties to adopt contracts that result in less efficient complementary investment because of hold-up problems. Third, when there are multiple production periods, a long-term component contract under which some payments are made before any innovation has taken place can also serve as a (partial) substitute for package licensing in some circumstances. Lastly, although our formal model takes the IP incumbent's technology as given, a clear implication of this analysis is that package licensing can increase the original innovator's initial incentives to undertake R&D. There clearly remain a number of extensions that must be addressed before we have a full understanding of package licensing. A model with a more general set of bargaining institutions would be useful, as would one in which Condition A is relaxed. Results without Condition A are difficult to obtain for general convex R&D cost functions because the IP incumbent's profit need not be a concave function of the license fees. It also would be worthwhile to examine additional institutional settings, including those in which the potential innovator were a third party, the potential licensee had better information about its valuation of the patented technology than did the potential licensor, or the parties were asymmetrically informed about the costs of innovation. We note that this type of model could also be extended to analyze the effects of package licensing on a potential intellectual property user's incentives to pursue litigation to have patents declared invalid, uninfringed, or unenforceable, or even extended to the more general phenomenon of contractually tying complementary goods in order to deter two-stage entry in markets where buyers may sponsor entry. Lastly, the analysis of the present paper could be extended to the case of package licensing by patent pools in situations where design-around innovation by non-pool members is possible.