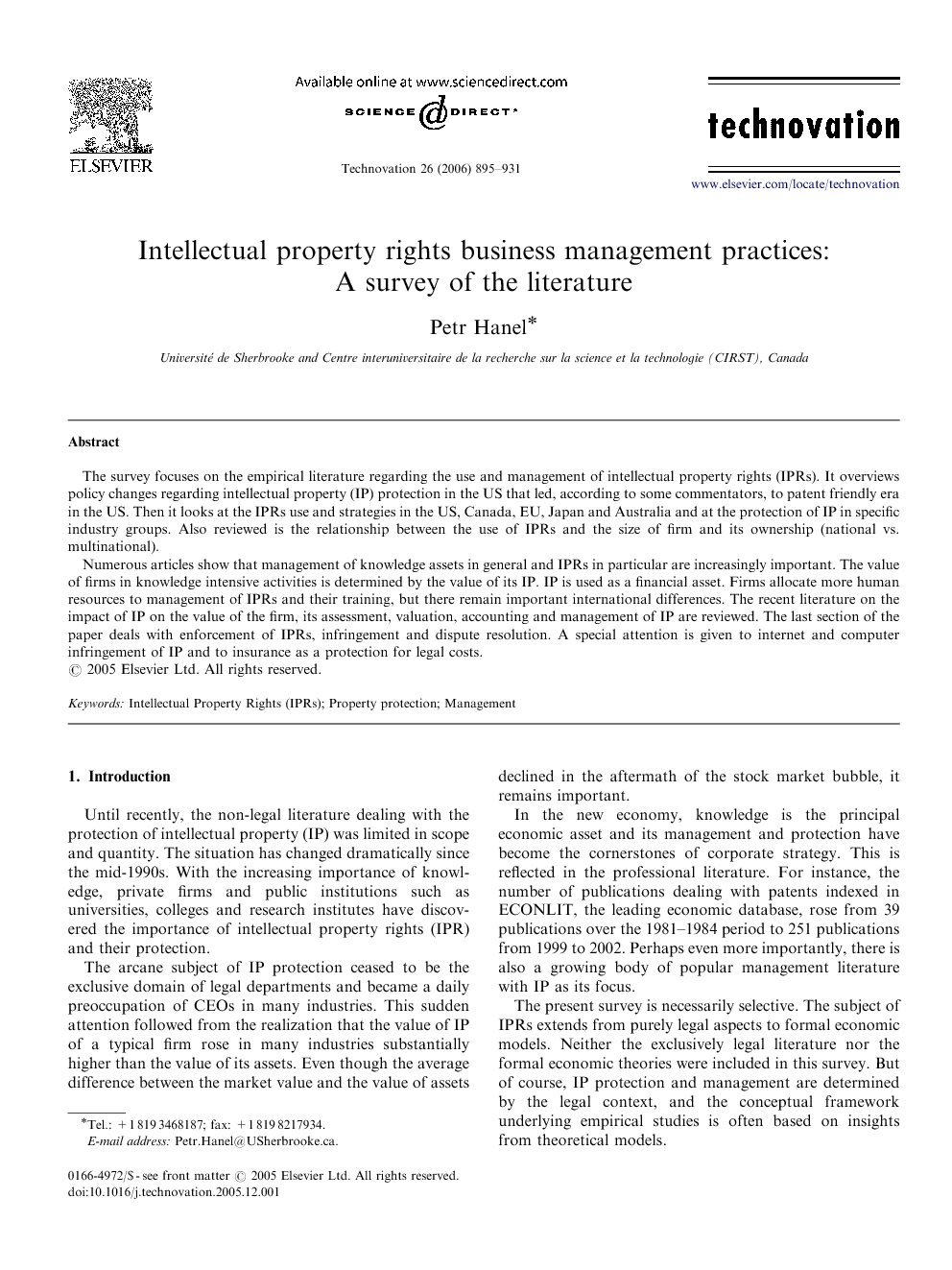 The survey focuses on the empirical literature regarding the use and management of intellectual property rights (IPRs). It overviews policy changes regarding intellectual property (IP) protection in the US that led, according to some commentators, to patent friendly era in the US. Then it looks at the IPRs use and strategies in the US, Canada, EU, Japan and Australia and at the protection of IP in specific industry groups. Also reviewed is the relationship between the use of IPRs and the size of firm and its ownership (national vs. multinational). Numerous articles show that management of knowledge assets in general and IPRs in particular are increasingly important. The value of firms in knowledge intensive activities is determined by the value of its IP. IP is used as a financial asset. Firms allocate more human resources to management of IPRs and their training, but there remain important international differences. The recent literature on the impact of IP on the value of the firm, its assessment, valuation, accounting and management of IP are reviewed. The last section of the paper deals with enforcement of IPRs, infringement and dispute resolution. A special attention is given to internet and computer infringement of IP and to insurance as a protection for legal costs.

Until recently, the non-legal literature dealing with the protection of intellectual property (IP) was limited in scope and quantity. The situation has changed dramatically since the mid-1990s. With the increasing importance of knowledge, private firms and public institutions such as universities, colleges and research institutes have discovered the importance of intellectual property rights (IPR) and their protection. The arcane subject of IP protection ceased to be the exclusive domain of legal departments and became a daily preoccupation of CEOs in many industries. This sudden attention followed from the realization that the value of IP of a typical firm rose in many industries substantially higher than the value of its assets. Even though the average difference between the market value and the value of assets declined in the aftermath of the stock market bubble, it remains important. In the new economy, knowledge is the principal economic asset and its management and protection have become the cornerstones of corporate strategy. This is reflected in the professional literature. For instance, the number of publications dealing with patents indexed in ECONLIT, the leading economic database, rose from 39 publications over the 1981–1984 period to 251 publications from 1999 to 2002. Perhaps even more importantly, there is also a growing body of popular management literature with IP as its focus. The present survey is necessarily selective. The subject of IPRs extends from purely legal aspects to formal economic models. Neither the exclusively legal literature nor the formal economic theories were included in this survey. But of course, IP protection and management are determined by the legal context, and the conceptual framework underlying empirical studies is often based on insights from theoretical models. The survey starts with an overview of changes in the US and international IPR regimes leading to the so-called “patent friendly era”. Surprisingly, as Section 3 shows, the notable increase in the use of patents in the US cannot be attributed mainly to favorable changes in the US IP regime. The rise of patenting and use of other IP instruments has often little to do with their effectiveness in protecting IP and much more with their usefulness in corporate strategies blocking competition and providing bargaining chips for cross-licensing. Section 4 overviews the IPRs’ use and strategies in the US, Canada, EU, Japan and Australia. It is well known that the importance of various IP instruments varies significantly from one industrial sector to another. After a brief look at IP in more traditional industries, Section 5 focuses on IP practices and strategies used in information technologies and communications, including computers, software, business methods and Internet applications. Patenting in life sciences applications that would require a separate section was mentioned only to illustrate certain specific points. The empirical literature surveyed in Section 6 shows that small firms are less likely to use IP than larger ones and multinational corporations (MNC) more likely than firms owned by nationals. The reluctance of smaller firms to use IP is, to a certain degree, explained by the financial burden patenting and patent litigation represents for small companies. With the increasing importance and use of IP, its management is becoming an integral part of a company's competitive strategies. The cost of IP, its management and the human resources involved are presented in Section 7. In order to better derive value from IP, firms use more and more sophisticated methods. The valuation of IP portfolios, its accounting and integration into corporate financial strategies are discussed in the following section. Finally, references to enforcement, infringement and negotiation of licensing agreements conclude the survey.