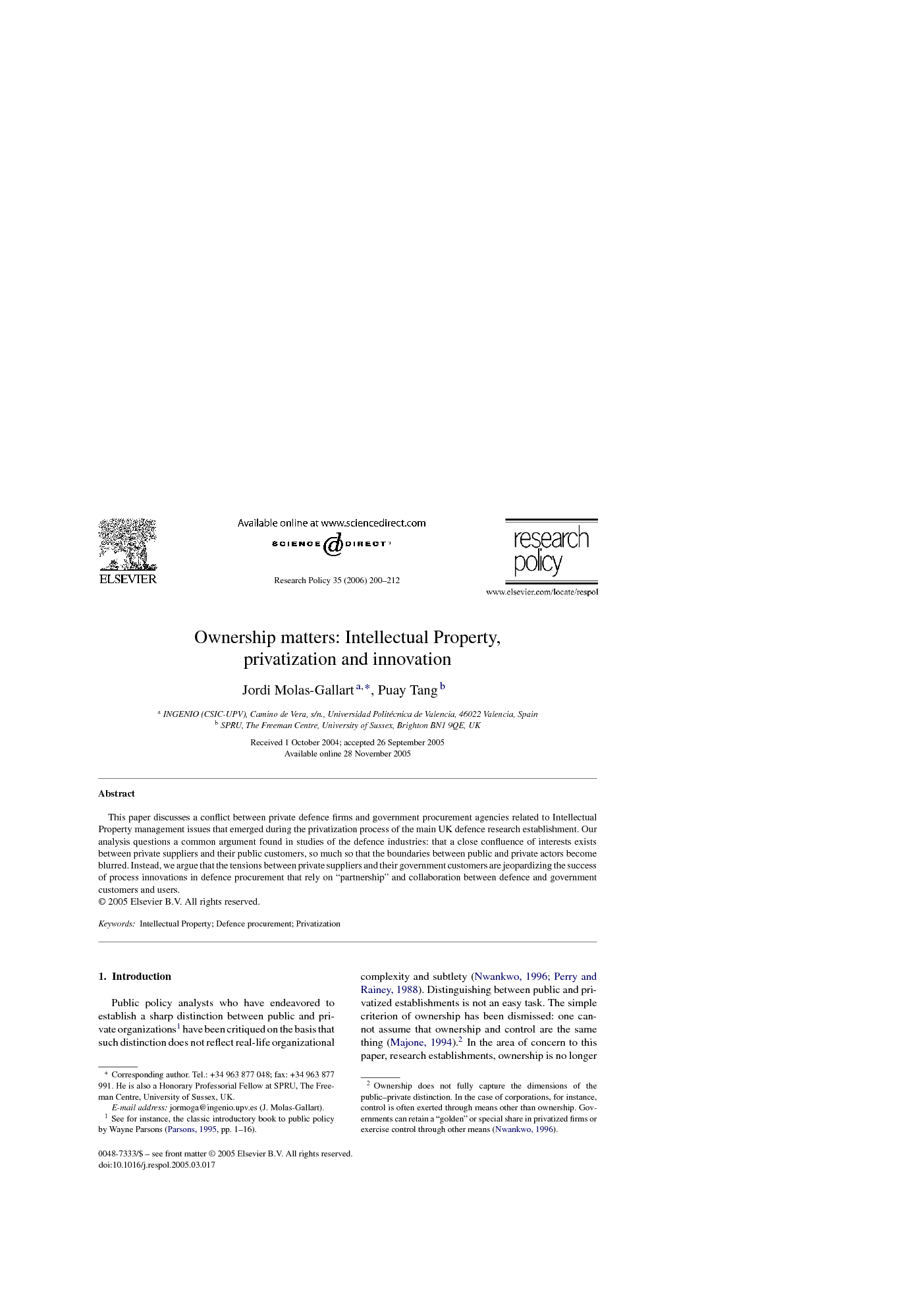 This paper discusses a conflict between private defence firms and government procurement agencies related to Intellectual Property management issues that emerged during the privatization process of the main UK defence research establishment. Our analysis questions a common argument found in studies of the defence industries: that a close confluence of interests exists between private suppliers and their public customers, so much so that the boundaries between public and private actors become blurred. Instead, we argue that the tensions between private suppliers and their government customers are jeopardizing the success of process innovations in defence procurement that rely on “partnership” and collaboration between defence and government customers and users.

Public policy analysts who have endeavored to establish a sharp distinction between public and private organizations1 have been critiqued on the basis that such distinction does not reflect real-life organizational complexity and subtlety (Nwankwo, 1996 and Perry and Rainey, 1988). Distinguishing between public and privatized establishments is not an easy task. The simple criterion of ownership has been dismissed: one cannot assume that ownership and control are the same thing (Majone, 1994).2 In the area of concern to this paper, research establishments, ownership is no longer seen as a relevant variable to understand their behaviour and performance. Crow and Bozeman (1987) argue that ownership can no longer be used as a criterion to establish a typology of R&D laboratories, maintaining that the traditional distinction between government, private and university research laboratories is outmoded and does not help understand the changing circumstances of research organizations: ownership is no longer relevant in a context of blurred boundaries between the public and private spheres. Awareness of imprecise boundaries between the two domains is not new. More than three decades ago John Kenneth Galbraith argued that the public–private distinction was either very tenuous or simply non-existent. This was particularly the case in areas like defence procurement (Galbraith, 1985, p. 322). The collaboration or collusion between private industrial suppliers and their defence customers has been reiterated by other analysts. Defence has been seen as a special kind of business, in which industry has developed a pernicious intimacy with its customers in government, influencing military spending, inhibiting adequate cost control, and therefore, proper accountability (Adams, 1982, Markusen, 2003, Lumpe, 1999 and Hartung and Marlin, 1985). From a completely different perspective, a closer collaboration between customers in the defence agencies and their industrial suppliers has been seen as a central requirement to improve the management and delivery of defence research and production programmes (Cohen and Noll, 1994). For instance, collaboration and “partnership,” delivered through “Integrated Project Teams,” are key concepts in the British effort to implement a programme of defence procurement reform, through the so-called “Smart Procurement Initiative” (Kemp, 2000, Dowdy, 2000 and Dowdy, 2001), which has become a “flagship” process innovation of the UK Ministry of Defence. All these perspectives share two common traits. First, they implicitly assume or explicitly argue that ownership is secondary in explaining organizational behavior. Second, they argue or assume that a confluence of interests exists between the industrial and customer organizations involved in defence procurement. This article examines these two propositions with reference to the management of Intellectual Property at the interface between a government agency in the process of privatization and large private defence suppliers in the UK. We show that (1) contrary to conventional wisdom such as that advanced by theorists noted above, long-term linkages between private suppliers and public customers do not necessarily lead to converging interests and collusion and (2) that ownership matters when explaining the behavior of the organizations involved in defence procurement. The policy outcome, we argue, is that the privatization process has hampered the attempts to introduce substantial innovations in the defence procurement process (the so-called “Smart Procurement Initiative”). Additionally, this paper contributes to the literature on the issues raised by the privatization of Government Research Establishments (GREs) by presenting a new angle: the unexpected challenges that privatization has presented to the management of data under the control of the laboratories. Our focus will be on the management of Intellectual Property (IP) in a defence GRE. Because of the heightened perception of the importance of knowledge assets in company performance and the generation of welfare (Teece, 2000), the generation and management of knowledge and its associated Intellectual Property Rights (IPRs) have become a key element of the inter-organizational collaboration that characterizes defence procurement. Our case analyzes the relationship between defence prime contractors, the government defence research establishments, and the defence procurement organizations. We focus on the difficulties that the Defence Evaluation and Research Agency (DERA) (the main UK Government Research Establishment in the defence field) privatization process caused in relation to the ownership of data that it had collected from private firms while operating as a Government agency. These difficulties have impinged on the process of procurement reform – Smart Procurement3 – initiated in the UK. Collaboration between industry and its Government customers is a cornerstone of this process of reform. Such collaboration, however, requires sharing of the IP embodied in project proposals, draft designs, engineering and technical data, manufacturing processes, etc. This paper argues that, as a result of the IP management problems generated by DERA's privatization process, the major UK defence manufacturers have become wary of sharing technical information with Ministry of Defence departments and agencies. This comes precisely at a time when increased data sharing is called for by the process innovations that Smart Procurement is trying to implement.