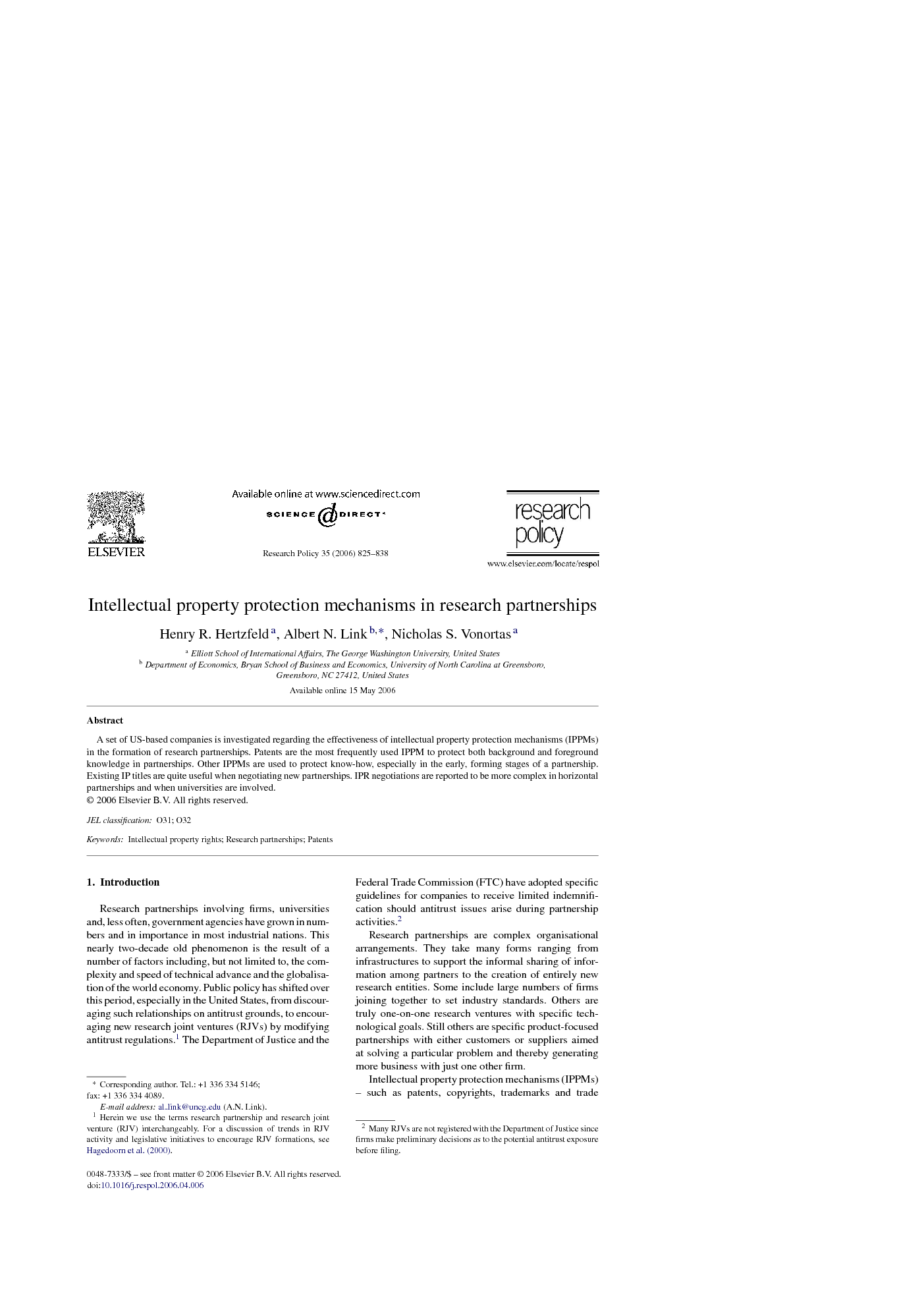 A set of US-based companies is investigated regarding the effectiveness of intellectual property protection mechanisms (IPPMs) in the formation of research partnerships. Patents are the most frequently used IPPM to protect both background and foreground knowledge in partnerships. Other IPPMs are used to protect know-how, especially in the early, forming stages of a partnership. Existing IP titles are quite useful when negotiating new partnerships. IPR negotiations are reported to be more complex in horizontal partnerships and when universities are involved.

Research partnerships involving firms, universities and, less often, government agencies have grown in numbers and in importance in most industrial nations. This nearly two-decade old phenomenon is the result of a number of factors including, but not limited to, the complexity and speed of technical advance and the globalisation of the world economy. Public policy has shifted over this period, especially in the United States, from discouraging such relationships on antitrust grounds, to encouraging new research joint ventures (RJVs) by modifying antitrust regulations.1 The Department of Justice and the Federal Trade Commission (FTC) have adopted specific guidelines for companies to receive limited indemnification should antitrust issues arise during partnership activities.2 Research partnerships are complex organisational arrangements. They take many forms ranging from infrastructures to support the informal sharing of information among partners to the creation of entirely new research entities. Some include large numbers of firms joining together to set industry standards. Others are truly one-on-one research ventures with specific technological goals. Still others are specific product-focused partnerships with either customers or suppliers aimed at solving a particular problem and thereby generating more business with just one other firm. Intellectual property protection mechanisms (IPPMs) – such as patents, copyrights, trademarks and trade secrets – are considered to be critically important to research partnerships because sharing of information is key not only to the initial formation of the research partnership, but also to its ability to complete successfully the designed research. Extant economics and business literature anticipates that the use of IPPMs in research partnerships depends on many factors relating to the type of knowledge to be protected, the kind of competition in the specific industry, the organisational characteristics and culture of the owner of the knowledge as well as of its partners (e.g. competitors, suppliers/buyers, universities), the nature of the partnership, the objectives of the partnership and the position of the partnership in the continuum from the early planning stage to termination (Hertzfeld et al., 2001). Yet, there is a conspicuous absence of empirical analysis, beyond anecdotal information and case studies, about the use of different IPPMs in research partnerships, the role that these mechanisms are expected to have and the relative effectiveness of these mechanisms in protecting intellectual property in a research partnership context.3 Our exploratory research in this area was intended to begin to fill this conspicuous void, accounting for all aspects of intellectual property in formal collaborative R&D agreements. This paper presents a set of results from a multi-year, multi-faceted project on IPPMs. It describes findings from a sizeable set of firms that were investigated with regard to their assessment of the role and effectiveness of IPPMs used in the formation and execution of research partnerships. The samples of surveyed and interviewed firms include large, diversified US-based companies. All in all, our findings confirm the view that resolving issues of IP protection is a fundamental consideration for all partners. While there is strategic variation among firms regarding the way they approach the issue of IPRs in research partnerships, our evidence does not, however, indicate that this has been an issue presenting insurmountable problems for large, diversified companies. Patents are found to be the most frequently used IPPM to protect both firms’ existing technologies when entering into an RJV (background knowledge) and the technology created by the RJV (foreground knowledge). Other IPPMs, and especially trade secrets, are also used extensively to protect know-how and tacit knowledge, especially in the early, negotiating stages of a partnership. Existing IP titles – especially patents – are reportedly quite useful when negotiating new RJVs. Prior experience with the specific research partners facilitates the formation of a new collaborative R&D agreement. Finally, IPR negotiations are reportedly more complex in horizontal RJVs and when universities are involved. Almost without exception, the sampled companies expressed serious concerns in reference to their recent experience with universities, especially with regard to negotiating IPR agreements with university technology transfer offices. The remainder of the paper is organised as follows. Section 2 considers conceptual issues related to the protection of IP in research partnerships. Identification of these issues will lead to a better understanding of the complexity of IP-related activities associated with the organisation of research partnerships. The design of the study and the data collection process are described in Section 3. Section 4 discusses our survey and interview findings. Section 5 presents a summary of an exploratory econometric analysis of a portion of these data relating to the importance of patents in protecting background and foreground knowledge in partnerships. Finally, Section 6 concludes the paper with summary remarks.