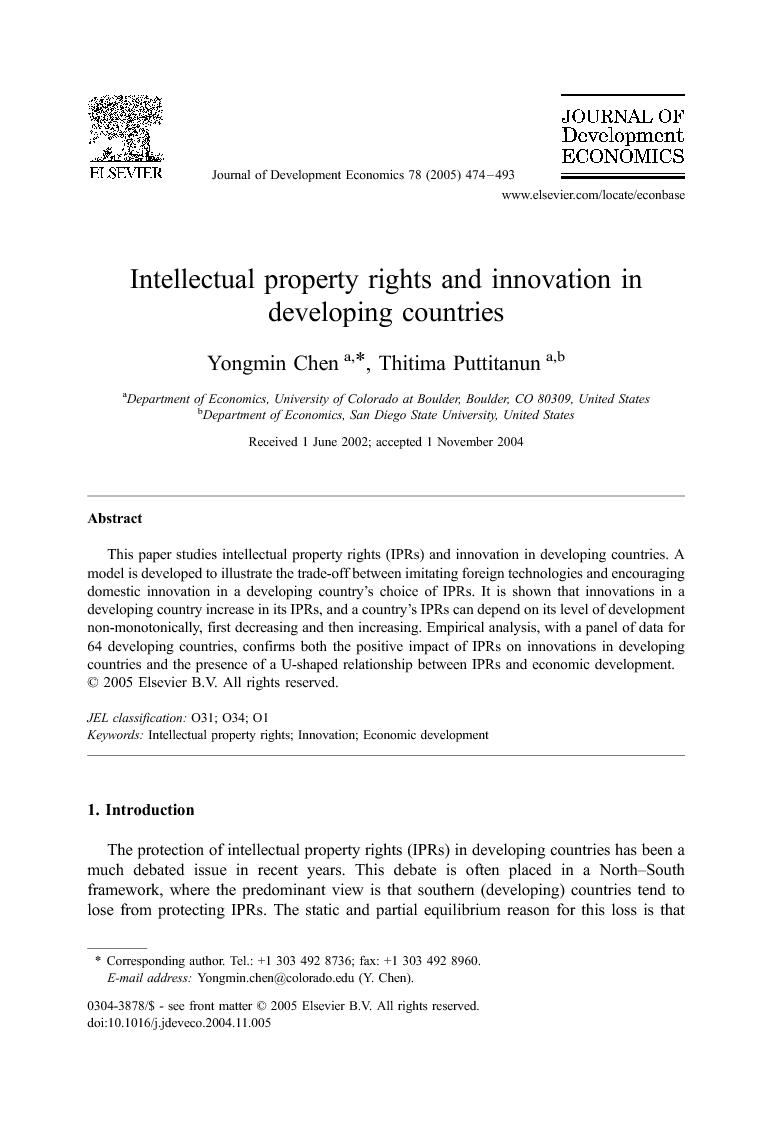 This paper has conducted a theoretical and empirical analysis of intellectual property rights and innovation in developing countries. While lower IPRs facilitate imitations of foreign technologies, which reduces the market power of foreign firms and benefits domestic consumers, a developing country may also need to increase IPRs in order to encourage innovations by domestic firms. We show that innovation in a developing country increases with the protection of IPRs, and it is possible that a country's optimal IPRs depend on its level of development (technological ability) in a non-monotonic way, first decreasing and then increasing. We evaluate these theoretical results empirically, using a panel data set including 64 developing countries over the 1975–2000 period. The empirical evidence confirms both the positive impact of IPRs on innovations in developing countries and the presence of a U-shaped relationship between IPRs and levels of economic development. The conventional wisdom on IPRs has been that a developing country tends to lose from increasing IPRs and, if it does increase its protection for IPRs, it is due to pressures from the developed world. In other words, if there is a trade off for a developing country in its choice of IPRs, it is largely the need to gain access to foreign technologies/markets against the benefits from imitation. In this paper, we have focused on a different trade-off: the need to facilitate imitation and the need to provide incentives for domestic innovation. We believe that the benefits from IPRs to a developing country are actually much more than encouraging domestic innovation in the narrow sense. As Stiglitz (1989) has suggested, the lack of a functioning market system could be the biggest obstacle to the development of an economy. The respect for property rights in general, and for IPRs in particular, can be crucial for the establishment of a well-functioning market system and can thus be crucial to economic development.22 The positive effects of IPRs on domestic innovations, therefore, should be viewed as part of broader effects on entrepreneurial activities.23 Our analysis suggests a range of common interests between the North and the South in promoting IPRs in the South. This is not to say that there exists no conflict in their interests; in fact, our theory suggests that there could be less incentive to protect IPRs for countries with lower innovative abilities (lower levels of development). But as more developing countries recognize the importance of encouraging entrepreneurial (innovative) activities by domestic firms, the range of common interests between developing and developed countries in promoting IPRs will broaden. Thus, in the long-run, perhaps the best way for the North to promote IPRs in the South is to help the South increase innovative activities.