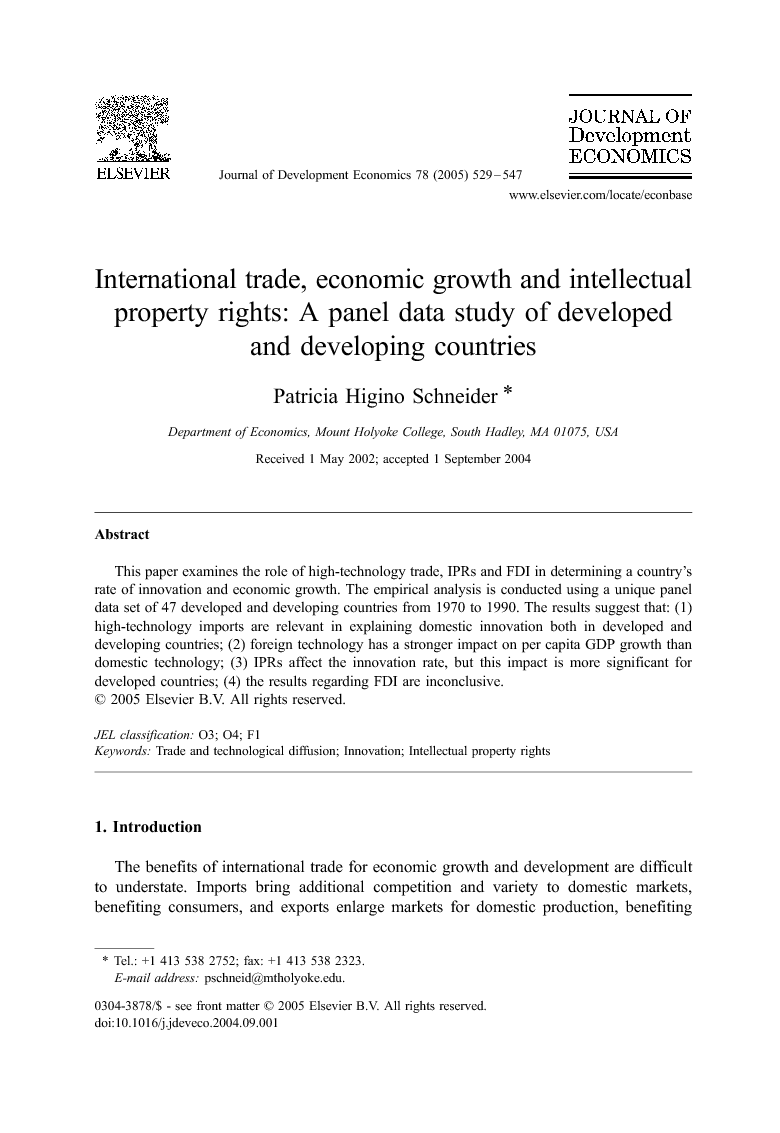 This paper examines the role of high-technology trade, IPRs and FDI in determining a country's rate of innovation and economic growth. The empirical analysis is conducted using a unique panel data set of 47 developed and developing countries from 1970 to 1990. The results suggest that: (1) high-technology imports are relevant in explaining domestic innovation both in developed and developing countries; (2) foreign technology has a stronger impact on per capita GDP growth than domestic technology; (3) IPRs affect the innovation rate, but this impact is more significant for developed countries; (4) the results regarding FDI are inconclusive.

The benefits of international trade for economic growth and development are difficult to understate. Imports bring additional competition and variety to domestic markets, benefiting consumers, and exports enlarge markets for domestic production, benefiting businesses. Trade exposes domestic firms to the best practices of foreign firms and to the demands of discerning customers, encouraging greater efficiency. Trade gives firms access to improved capital inputs such as machine tools, boosting productivity and providing new opportunities for growth for developing countries. Until recently, the neoclassical growth model (Solow, 1956 and Swan, 1956) was the main theoretical framework used to explain economic growth. However, that framework does not offer a formal link between trade policies and long-run growth. The development of endogenous growth models (Romer, 1990, Grossman and Helpman, 1991, Rivera-Batiz and Romer, 1991 and Aghion and Howitt, 1992) provides such link and suggests different channels through which trade could affect economic growth. One idea is that imports may embody innovations that are not available in the local economy, and local researchers may gain insights from these innovations. Therefore, by providing access to foreign innovations, trade can promote technological diffusion and economic growth. Previous research has shown a positive link between trade in physical goods and technological diffusion. Some of these studies have focused on general imports as a channel for technological diffusion (Coe and Helpman, 1995, Coe et al., 1997, Eaton and Kortum, 1996, Eaton and Kortum, 1997 and Keller, 1997). Other studies have looked at a more disaggregated measure of imports (Wang and Xu, 1997, Connolly, 1998 and Keller, 1999). However, most of these studies have focused on developed countries.1 The motivation for this paper comes from the fact that many theoretical models suggest that technological diffusion among developed countries might differ from technological diffusion between developed and developing countries.2 Additionally, in its 1998/1999 Development Report, the World Bank emphasizes the importance of openness, stronger intellectual property rights (IPRs) and foreign direct investment (FDI) as important channels for acquiring imported knowledge, especially in developing countries (World Bank, 1998b). The investigation of these issues requires empirical work that includes both developed and developing economies, since policy recommendations that arise from this kind of analysis may have very different effects on these two groups of countries. This paper conducts an empirical investigation of the role of trade in determining the rate of innovation and economic growth in developed and developing countries, and investigates the importance of IPRs and FDI in these processes. FDI has been identified in the literature as another important channel for technological diffusion (Grossman and Helpman, 1991 and Helpman, 1993). Additionally, patent regimes could be an additional factor in the relationship between trade and growth. As suggested by Maskus and Penubarti (1995), returns to innovation could be influenced by variations in international patent laws, with a primary channel being decisions by firms to trade in different markets.3 More specifically, this paper focuses on three main questions: (1) Does trade promote innovation and growth by providing access to foreign technology? (2) How important are FDI inflows and IPRs in these processes? and (3) Are the effects different for developed and developing countries? This study complements the literature by including a more representative sample of developing countries and by focusing on high-technology trade. The empirical analysis is conducted using a unique panel data set of 47 developed and developing countries from 1970 to 1990, in which patent data is used as a proxy for innovation. Various studies investigating the determinants of innovation and technological diffusion use micro-data sets.4 While these studies have produced important and interesting results, this paper uses data aggregated at the country level. This approach clearly leads to loss of some information, but generates the benefit of allowing me to focus on the dynamics of innovation and growth across countries and country groupings. By contrasting empirical specifications for innovation and per capita GDP growth, the results in this paper suggest that traditional growth regressions might not be able to capture the impact of factors like IPR protection. By estimating the regressions for separate groups of countries, the results also suggest that pooling together developed and developing countries in studies like this might lead to misleading conclusions, and consequently to inadequate policy recommendations. This paper is organized as follows. Section 2 briefly reviews the empirical literature on the subject. Section 3 discusses the methodology implemented in the paper. Section 4 describes the data. Section 5 presents the empirical results and Section 6 concludes this paper.