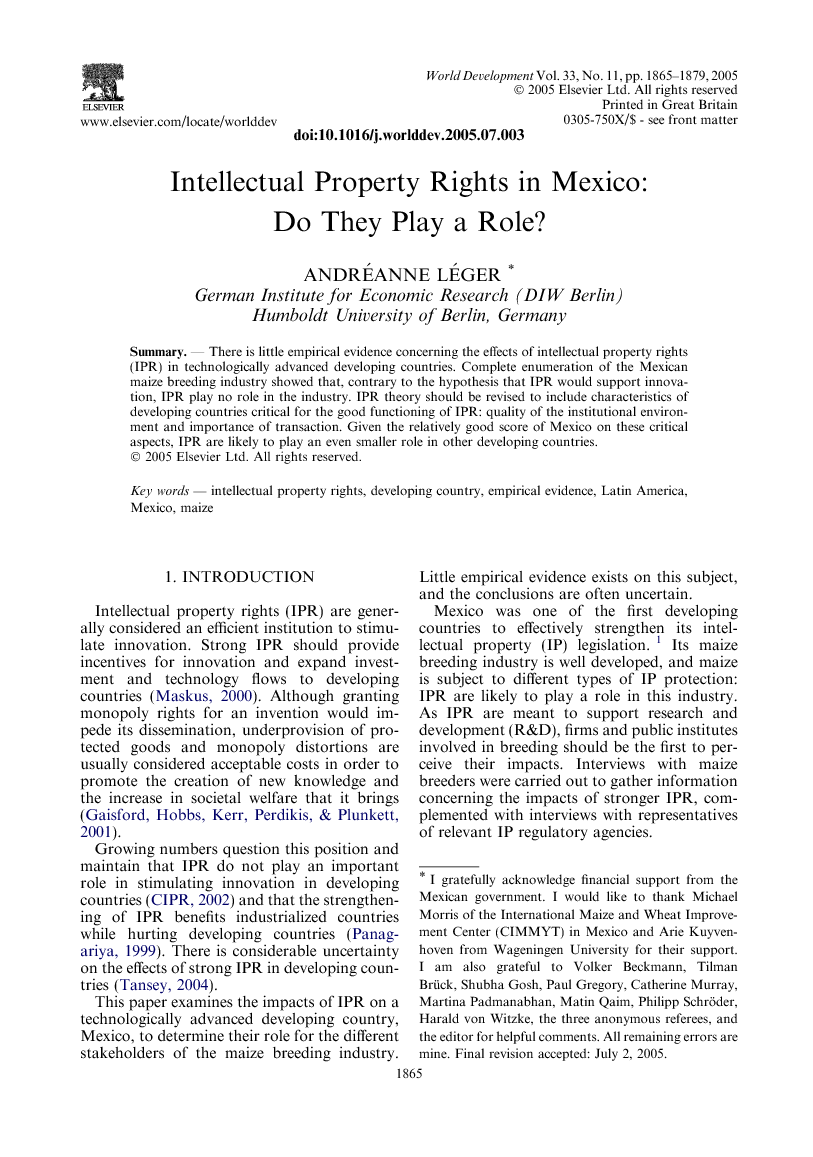 There is little empirical evidence concerning the effects of intellectual property rights (IPR) in technologically advanced developing countries. Complete enumeration of the Mexican maize breeding industry showed that, contrary to the hypothesis that IPR would support innovation, IPR play no role in the industry. IPR theory should be revised to include characteristics of developing countries critical for the good functioning of IPR: quality of the institutional environment and importance of transaction. Given the relatively good score of Mexico on these critical aspects, IPR are likely to play an even smaller role in other developing countries.

Intellectual property rights (IPR) are generally considered an efficient institution to stimulate innovation. Strong IPR should provide incentives for innovation and expand investment and technology flows to developing countries (Maskus, 2000). Although granting monopoly rights for an invention would impede its dissemination, underprovision of protected goods and monopoly distortions are usually considered acceptable costs in order to promote the creation of new knowledge and the increase in societal welfare that it brings (Gaisford, Hobbs, Kerr, Perdikis, & Plunkett, 2001). Growing numbers question this position and maintain that IPR do not play an important role in stimulating innovation in developing countries (CIPR, 2002) and that the strengthening of IPR benefits industrialized countries while hurting developing countries (Panagariya, 1999). There is considerable uncertainty on the effects of strong IPR in developing countries (Tansey, 2004). This paper examines the impacts of IPR on a technologically advanced developing country, Mexico, to determine their role for the different stakeholders of the maize breeding industry. Little empirical evidence exists on this subject, and the conclusions are often uncertain. Mexico was one of the first developing countries to effectively strengthen its intellectual property (IP) legislation.1 Its maize breeding industry is well developed, and maize is subject to different types of IP protection: IPR are likely to play a role in this industry. As IPR are meant to support research and development (R&D), firms and public institutes involved in breeding should be the first to perceive their impacts. Interviews with maize breeders were carried out to gather information concerning the impacts of stronger IPR, complemented with interviews with representatives of relevant IP regulatory agencies. Complete enumeration of the industry2 showed that IPR are not important for breeders in general, but that they are important for certain breeders’ categories. Even though they exist on a formal level, IPR are in most cases ignored by breeders in their day-to-day activities. Therefore, IPR do not provide incentives for R&D and do not affect the concentration of the industry nor seed prices, while the lack of data does not allow determining the effects on the diffusion of germplasm, new varieties, and inventions. The analysis indicates that the quality of the institutional environment and the confidence in the judiciary system, the importance of transaction costs related to obtaining and securing protection, as well as the level of technological development of the country are important factors affecting IPR’s use and perceived efficiency. These factors should be considered when predicting the impacts of IPR on developing countries. The paper is divided into seven sections. Section 2 reviews IPR and their expected impacts. Section 3 provides background information on the Mexican maize breeding industry. Section 4 presents the methodology used and Section 5, the data gathered through the interviews. Section 6 discusses the findings and derives implications for the relevance of IPR implementation in developing countries, and Section 7 concludes.