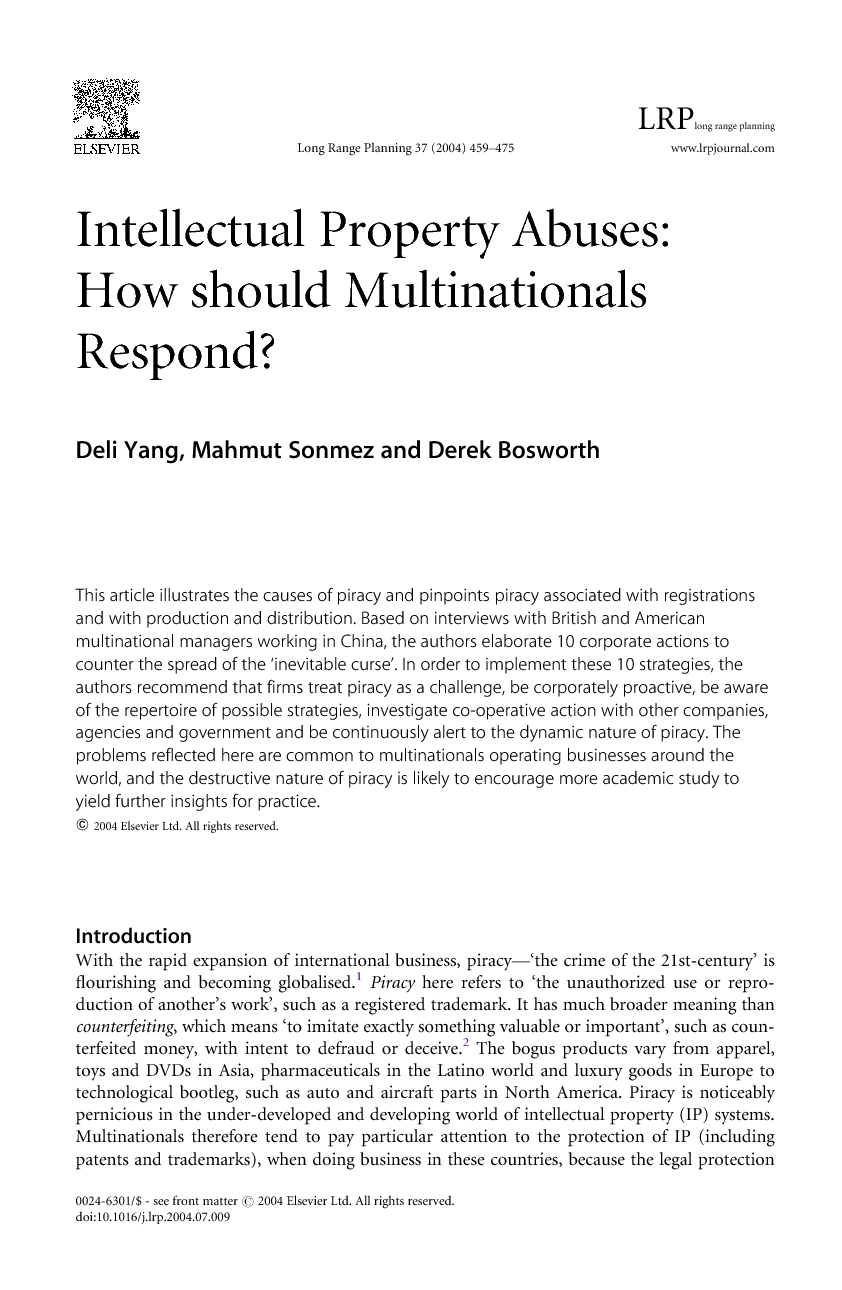 This article illustrates the causes of piracy and pinpoints piracy associated with registrations and with production and distribution. Based on interviews with British and American multinational managers working in China, the authors elaborate 10 corporate actions to counter the spread of the ‘inevitable curse’. In order to implement these 10 strategies, the authors recommend that firms treat piracy as a challenge, be corporately proactive, be aware of the repertoire of possible strategies, investigate co-operative action with other companies, agencies and government and be continuously alert to the dynamic nature of piracy. The problems reflected here are common to multinationals operating businesses around the world, and the destructive nature of piracy is likely to encourage more academic study to yield further insights for practice.

With the rapid expansion of international business, piracy—‘the crime of the 21st-century’ is flourishing and becoming globalised.1Piracy here refers to ‘the unauthorized use or reproduction of another’s work’, such as a registered trademark. It has much broader meaning than counterfeiting, which means ‘to imitate exactly something valuable or important’, such as counterfeited money, with intent to defraud or deceive. 2 The bogus products vary from apparel, toys and DVDs in Asia, pharmaceuticals in the Latino world and luxury goods in Europe to technological bootleg, such as auto and aircraft parts in North America. Piracy is noticeably pernicious in the under-developed and developing world of intellectual property (IP) systems. Multinationals therefore tend to pay particular attention to the protection of IP (including patents and trademarks), when doing business in these countries, because the legal protection of their original inventions and long established trademarks secure them competitive advantages over their rivals. Piracy undermines multinationals’ cross-border businesses. It is commonly alleged that the People’s Republic of China (China) is one of the countries in which much piracy occurs. In 2001, for example, the Chinese government destroyed 11,000 piracy factories, and confiscated US$2.8 million worth of shoddy products, but the figure of actual piracy is far more appalling, including $160 million worth of DVDs, and $47 million worth of CDs and cassettes,3 and counterfeiting has undermined China’s position in terms of attracting businesses from foreign countries. Staunch supporters of IP have dubbed China as the ‘Centre of Counterfeiting’ and ‘the International Capital of Piracy’ for a number of reasons.4 Firstly, the country is presently a centre for global business: multinationals have established themselves in variety of different sectors, and their concerns about piracy attract media and organisational attention. The US trade representatives (USTR), for example, repeatedly files corporate complaints on countries with inadequate IP protection to the US government, and China appeared on their ‘USTR Priority Watch Lists’ in both 1992 and 1995.5 Secondly, the booming of international business in the most populous country on earth also attracts high levels of imitation. Such a lucrative market invites speculators to explore the unsatisfied markets created by low consumer incomes and limited knowledge about the crime. Thirdly, the gap between developed countries and China in IP development attracts great discussion and research attention. This article aims to provide strategic solutions to the problems associated with piracy that British and American multinationals have encountered in China. With this aim in mind, the article will first reveal the major piracy problems, and then briefly explain the data source that has contributed to the research results. The main part of the article then presents an analysis of the strategic solutions to these problems. Finally, the broad implications from the study will be applied to the strategic management context for managers and academics.