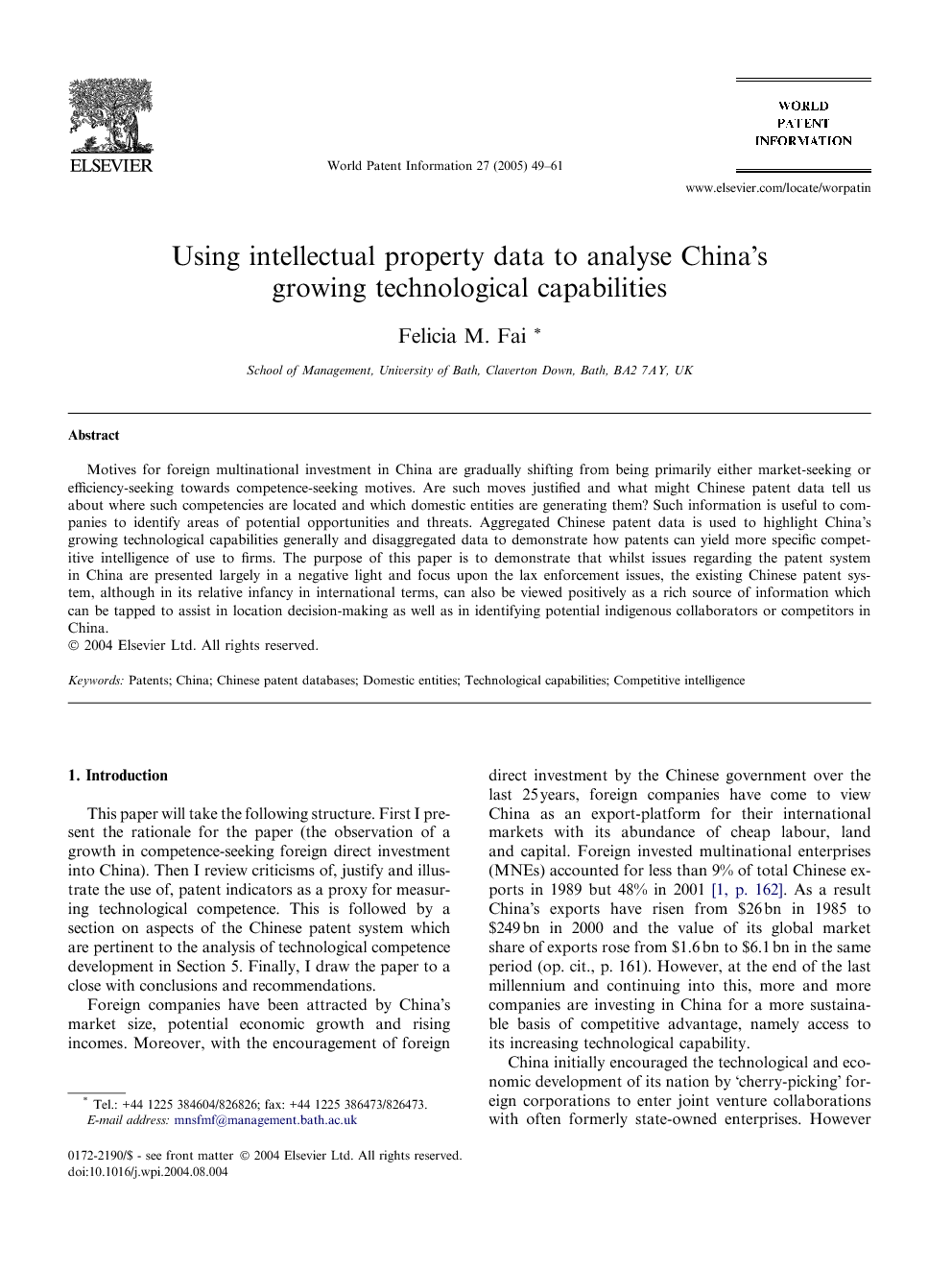 Motives for foreign multinational investment in China are gradually shifting from being primarily either market-seeking or efficiency-seeking towards competence-seeking motives. Are such moves justified and what might Chinese patent data tell us about where such competencies are located and which domestic entities are generating them? Such information is useful to companies to identify areas of potential opportunities and threats. Aggregated Chinese patent data is used to highlight China’s growing technological capabilities generally and disaggregated data to demonstrate how patents can yield more specific competitive intelligence of use to firms. The purpose of this paper is to demonstrate that whilst issues regarding the patent system in China are presented largely in a negative light and focus upon the lax enforcement issues, the existing Chinese patent system, although in its relative infancy in international terms, can also be viewed positively as a rich source of information which can be tapped to assist in location decision-making as well as in identifying potential indigenous collaborators or competitors in China.

This paper will take the following structure. First I present the rationale for the paper (the observation of a growth in competence-seeking foreign direct investment into China). Then I review criticisms of, justify and illustrate the use of, patent indicators as a proxy for measuring technological competence. This is followed by a section on aspects of the Chinese patent system which are pertinent to the analysis of technological competence development in Section 5. Finally, I draw the paper to a close with conclusions and recommendations. Foreign companies have been attracted by China’s market size, potential economic growth and rising incomes. Moreover, with the encouragement of foreign direct investment by the Chinese government over the last 25 years, foreign companies have come to view China as an export-platform for their international markets with its abundance of cheap labour, land and capital. Foreign invested multinational enterprises (MNEs) accounted for less than 9% of total Chinese exports in 1989 but 48% in 2001 [1, p. 162]. As a result China’s exports have risen from $26 bn in 1985 to $249 bn in 2000 and the value of its global market share of exports rose from $1.6 bn to $6.1 bn in the same period (op. cit., p. 161). However, at the end of the last millennium and continuing into this, more and more companies are investing in China for a more sustainable basis of competitive advantage, namely access to its increasing technological capability. China initially encouraged the technological and economic development of its nation by ‘cherry-picking’ foreign corporations to enter joint venture collaborations with often formerly state-owned enterprises. However over time, through more open FDI arrangements and other policy initiatives,1 foreign companies have been transferring more sophisticated products and production processes. These provide opportunities for demonstration effects in more advanced products and processes, more sophisticated learning-by-doing (through reverse engineering and imitation) and deliberate training provision to indigenous managers and workers. These have led Chinese workers to upgrade their skills and capabilities. In turn, this has been partially responsible for the evolution of inward foreign direct investment (FDI) from being concentrated in labour-intensive industries in the 1980’s to capital-intensive ones in the 1990s and now in the new millennium, to technology-intensive industries [2, p. 26], although the latter is still in its infancy. Almost 80% of Fortune 500 firms have cumulatively invested in more than 2000 projects in China in technology-based industries such as computers, electronics, telecommunications equipment, pharmaceuticals, petrochemicals and power generating equipment (op. cit.). This is reflected in the export of technology-intensive products: in 1996 foreign affiliates accounted for 59% of China’s exports in technology-intensive industries, whereas they accounted for 81% in 2000. There has also been tremendous endogenous change within China. For example, there is an extensive hard and soft R&D infrastructure: an existing pool of well-educated, talented, and cheap labour, plus the introduction and support of science and technology policies and continued strengthening of the Chinese intellectual property rights system to stimulate the national innovation system. Indeed, Chinese universities are increasingly working with private firms e.g. amongst others, Motorola’s investment in its China R&D institute: Chinese policies to develop national strength through science and education, combines China’s uniquely rich talent pool with Motorola’s cutting-edge technology, to bolster China’s competency in the world’s telecommunication industry (Source: Warrior and Delaney on http://www.motorola.com.cn/en/institute/intro.shtml). In fact, the success of the domestic scientific activity by China is such that much inward FDI in recent years has been directed towards research and development (R&D) efforts with 100+ centres having been established by among others: Microsoft, Motorola, GM, GE, JVC, Lucent-Bell, Samsung, Nortel, IBM, Intel, Du Pont, P&G, Ericsson, Nokia, Panasonic, Mitsubishi, AT&T, Siemens. Motorola made a $200 millon investment in electronics R&D centres employing 650 research personnel [2, p. 26] and plans to invest $1.3 bn employing 5000 R&D employees and software engineers by 2006 (http://www.motorola.com.cn/en/institute/Motorola website accessed 25/07/03). Through the endogenous stimulation of the science base and its interaction with exogenous sources of technology from foreign invested multinationals, China’s performance in hi-tech products has improved dramatically such that in 1985 China’s global market share of hi-tech products was only 0.4%, by 2000 it had increased 15 times to 6.0%; hi-tech products accounted for 2.6% of China’s total exports in 1985, by 2000, 22.4% and of China’s 10 principal export products (based on SITC Rev 2 classifications) 9 were amongst the 50 most dynamic world imports in 1985–2000 and all 10 were groups in which China gained world market import shares ([1, p. 162], Table VI.5 for details). Underlying this phenomenal improvement in economic performance is (amongst other things) an improvement in the capabilities and competencies of Chinese enterprises, institutes and individuals. Empirical evidence of this effect by using patent data drawn from the State Intellectual Property Office (SIPO), PRC is one of the purposes of this paper. Additionally, whilst firms increasingly use US, Japanese or European patent data for competitive intelligence purposes [3] and [4], in China such firms are so focussed on the counterfeiting and lax enforcement issues that they seem to have neglected to recognise that the Chinese patent system itself conforms to international standards with being a signatory to the various patent treaties and agreements (see [5] for details). As such the patent data held in this system may also be used for competitive intelligence purposes. This paper demonstrates how Chinese patent data can be used to inform future investment purposes in terms of location, awareness of potential threats from within the indigenous scientific and business community or indeed potential partners and collaborators in these domains. Managers of Chinese firms could do likewise and in future, as the financial system of China undergoes further development and reconstruction, patent data may be useful to domestic Chinese enterprises to potentially leverage acquisition prices if they are potential targets of foreign MNEs. However, before I demonstrate the growing technological capabilities of China and what Chinese patent data might reveal, it is necessary to discuss the appropriateness of using patent data to do this.

China holds huge potential, not only as an export-platform for low-cost production and as a market in its own right, but as a source of technological skills and competencies. The absolute level of these competencies may still be low currently but this paper has shown that they are growing stronger. The intellectual property system in China is still relatively young and suffers from considerable problems relating to the enforcement of these rights. Foreign companies are particularly concerned with the infringement of intellectual property. Some preliminary interviews with Japanese electronics MNEs revealed that they perceive that the infringement of patent rights are low relative to copyright and trademarks because as yet, the Chinese do not have the technological capability to imitate the more sophisticated technologies. What this paper suggests is that whilst this might be the case currently, the indigenous Chinese workforce is catching-up as they become able to register invention patents, and not just utility models or design patents. Foreign competition may increasingly see Chinese companies as a potential threat both in the Chinese market in the medium term and potentially globally in the long run. For the Chinese government and industry the analysis presented here should be taken as an encouraging signal of their growing technological strength and innovativeness. At the same time, patent data has more positive information to reveal to foreign companies and would appear to encourage further FDI on a technological basis. Given the vast geographical size of China, the location issue is of vital importance to inward investing MNEs. As the capabilities-seeking motive for investment grows stronger the information that can be provided at the regional, corporate and institutional level will become more important. Regions demonstrating technological capability via accumulated patents may become more attractive to firms. Firms may seek to be close to a potential corporate partner, or firms may wish to build stronger and direct linkages to the science base by working closely with key universities, targeting graduates from those schools for recruitment. This in turn would encourage the inward investment and transfer of more sophisticated products and processes and potentially home base-augmenting R&D. Patent information is and will become very important to policy- and decision-makers in both corporations and national and regional governments. This is true amongst developed nations and will be equally true of China. If anything it is of crucial importance to China in its emerging state if it wishes to sustain the phenomenal rate at which it has attracted FDI. The realisation of the information patents can reveal to potential investors, collaborators and competitors should add fuel to the fire in the demand for the stronger enforcement of IPR by the Chinese authorities in addition to the legal-based arguments that issue currently hinges upon.