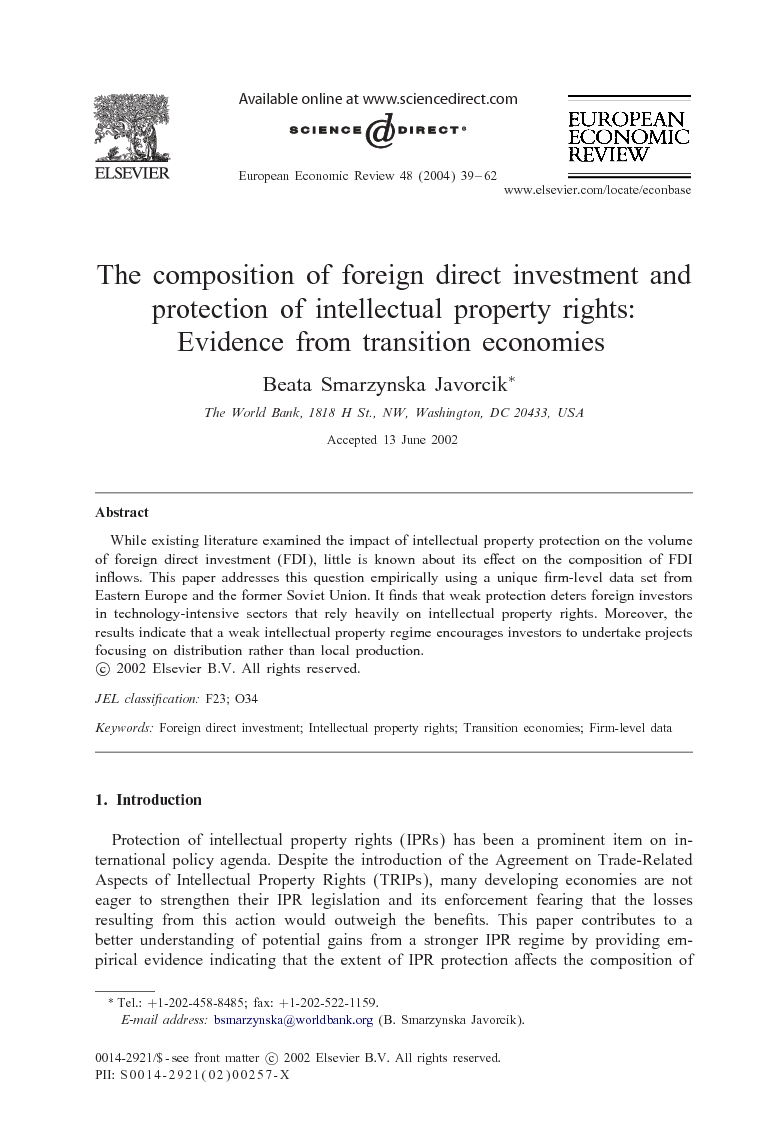 While existing literature examined the impact of intellectual property protection on the volume of foreign direct investment (FDI), little is known about its effect on the composition of FDI inflows. This paper addresses this question empirically using a unique firm-level data set from Eastern Europe and the former Soviet Union. It finds that weak protection deters foreign investors in technology-intensive sectors that rely heavily on intellectual property rights. Moreover, the results indicate that a weak intellectual property regime encourages investors to undertake projects focusing on distribution rather than local production.

Protection of intellectual property rights (IPRs) has been a prominent item on international policy agenda. Despite the introduction of the Agreement on Trade-Related Aspects of Intellectual Property Rights (TRIPs), many developing economies are not eager to strengthen their IPR legislation and its enforcement fearing that the losses resulting from this action would outweigh the benefits. This paper contributes to a better understanding of potential gains from a stronger IPR regime by providing empirical evidence indicating that the extent of IPR protection affects the composition of inflows of foreign direct investment (FDI). More specifically, this study finds that a weak IPR regime deters foreign investment in high technology sectors where intellectual property rights play an important role. It also shifts the focus of FDI projects from manufacturing to distribution. The relationship between IPR protection and FDI is quite complex. On the one hand, a weak IPR regime increases the probability of imitation, which makes a host country a less attractive location for foreign investors. On the other hand, strong protection may shift the preference of multinational corporations from FDI towards licensing. As surveys of multinationals have shown, the importance of IPR protection varies between industries. The concern about the IPR regime also depends on the purpose of an investment project, being the highest in the case of R&D facilities and the lowest for projects focusing exclusively on sales and distribution (see Mansfield 1994 and Mansfield 1995). This paper investigates two hypotheses that emerge from the above studies. First, it tests whether foreign investors in IPR sensitive sectors (as indicated by Mansfield, 1995) are more affected by the extent of intellectual property protection in a host country than investors in general. Second, it examines if the IPR regime influences a foreign investor's choice between setting up production facilities and engaging in activities focused solely on distribution. A unique firm-level data set used in this study allows for a more in depth examination of this phenomenon than was possible in the earlier literature which concentrated mostly on aggregate inflows and case studies. The data set was compiled from a worldwide survey of companies conducted by the European Bank for Reconstruction and Development (EBRD) in 1995. The survey recipients were asked whether they had undertaken FDI in twenty-four economies in Eastern Europe and the former Soviet Union and if so, what type of projects they were engaged in. These responses were supplemented with information on firm characteristics and host country specific variables. This study employs two measures of IPR protection. The first one is the index capturing the strength of patent rights developed by Ginarte and Park (1997) and extended by the author to include more transition economies. While the Ginarte–Park measure is quite detailed, it focuses only on laws present in the books but not their enforcement. Therefore a second index, developed specifically for this study, more crude in nature but taking into account all IPR laws on the books as well as their enforcement is also used. The empirical analysis confirms the hypotheses thus indicating that weak protection of intellectual property rights has a significant impact on the composition of FDI inflows. First, it deters foreign investors in four technology-intensive sectors: drugs, cosmetics and health care products; chemicals; machinery and equipment; and electrical equipment. These are the sectors in which, according to survey studies, IPRs play a particularly prominent role. Second, weak protection encourages foreign investors to set up distribution facilities rather than to engage in local production. Interestingly, this effect is significant in the case of all investors, not just those in sensitive industries. Finally, the results suggest that investors respond to both laws on the books and their enforcement. The above findings are robust to controls for privatization, transition progress, corruption level and effectiveness of the legal system. In addition to an intrinsic interest in transition, a focus on Eastern Europe and the former Soviet Union can offer insights into the broader question of the role of FDI in economic development throughout the world. While investment in other developing regions has been studied extensively, one finding of that research has been the importance of previous investment experience as a determinant of current FDI flows (see Hallward-Driemeier, 1996). Thus, the impact of current policy variables may be obscured and overcome by a long history of past policies, for which it is difficult to control. Transition economies offer almost a natural control since FDI in the region was negligible prior to 1989. Therefore, the results of this paper suggest that the importance of IPR protection in developing countries may have been understated in past research. This study is structured as follows. The next section briefly reviews the related literature and formulates the hypotheses to be tested. Section 3 describes the econometric specifications and the data set. In Section 4, empirical results are presented. Section 5 concludes the study.

Governments all over the world compete fiercely to attract foreign direct investment hoping that multinational corporations will bring new technologies, management skills and marketing know-how. In order to create an investment friendly environment, it is important to understand the factors that influence FDI inflows as well as the determinants of the composition of such flows. This study sheds some light on this issue by examining the impact of IPR protection on the structure of FDI inflows. Unlike the earlier literature, which focused on aggregate FDI flows, we employ a unique firm-level data set describing investment projects in Eastern Europe and the former Soviet Union. Since this region was virtually closed to FDI before 1989, its sudden opening to foreign investment can be compared to a natural experiment. Therefore, the data set used in this study presents a unique opportunity to estimate the effect of IPR protection on FDI in the absence of investment history. It is possible that in earlier studies, the lack of controls for past policy variables and investment history has obscured the impact of IPR protection on FDI. Both hypotheses tested in the study find empirical support. First, the data indicate that investors in sectors relying heavily on protection of intellectual property are deterred by a weak IPR regime in a potential host country. There is also some evidence that weak IPR protection may discourage all investors, not just those in the sensitive sectors. Second, the lack of IPR protection deters investors from undertaking local production and encourages them to focus on distribution of imported products. Interestingly, this effect is present in all sectors, not only those relying heavily on IPR protection. The results of this study suggest that more research is needed to improve our understanding of the implications of IPR regimes for the magnitude and composition of FDI inflows and their impact on developing countries. More specifically, it would be useful to study the characteristics of actual technologies transferred by multinationals to their subsidiaries to learn whether it is the case that newer technologies are more likely to be transferred to host countries with stronger IPR protection while only older technologies are used in subsidiaries located in economies with weak intellectual property regimes.