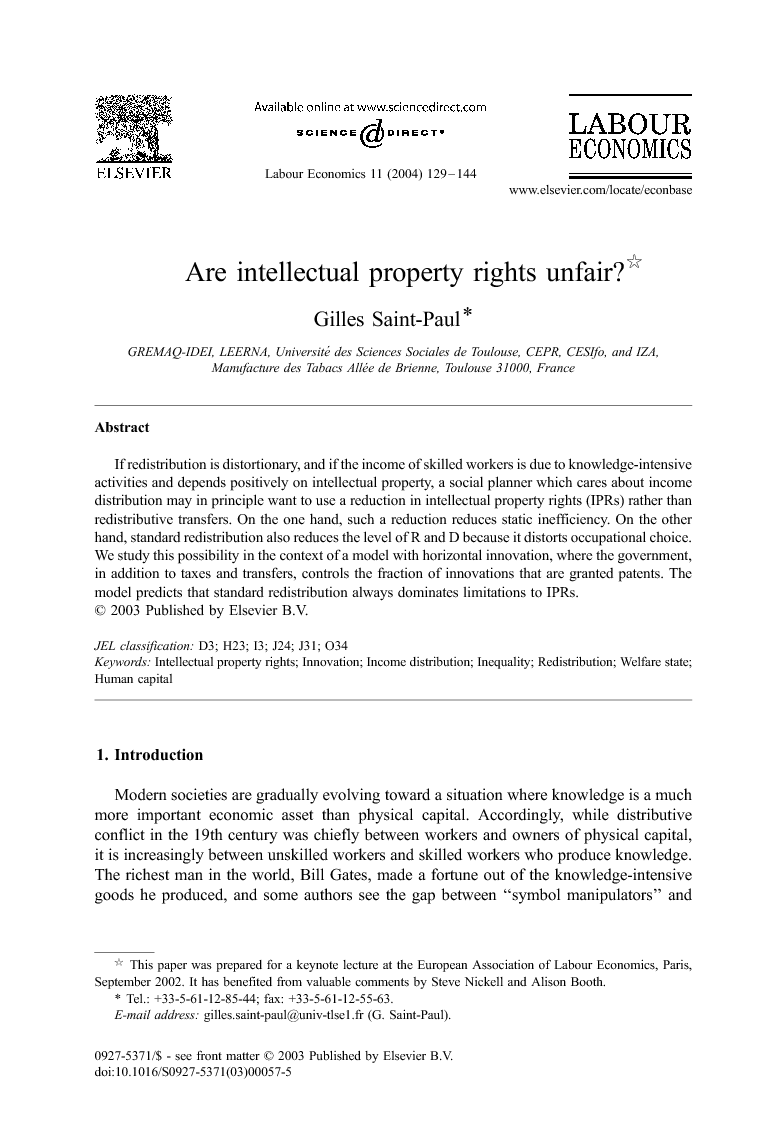 If redistribution is distortionary, and if the income of skilled workers is due to knowledge-intensive activities and depends positively on intellectual property, a social planner which cares about income distribution may in principle want to use a reduction in intellectual property rights (IPRs) rather than redistributive transfers. On the one hand, such a reduction reduces static inefficiency. On the other hand, standard redistribution also reduces the level of R and D because it distorts occupational choice. We study this possibility in the context of a model with horizontal innovation, where the government, in addition to taxes and transfers, controls the fraction of innovations that are granted patents. The model predicts that standard redistribution always dominates limitations to IPRs.

Modern societies are gradually evolving toward a situation where knowledge is a much more important economic asset than physical capital. Accordingly, while distributive conflict in the 19th century was chiefly between workers and owners of physical capital, it is increasingly between unskilled workers and skilled workers who produce knowledge. The richest man in the world, Bill Gates, made a fortune out of the knowledge-intensive goods he produced, and some authors see the gap between “symbol manipulators” and other workers as critical to modern economies.1 In the 19th century, defenders of the “working class” were often advocating a reconsideration of property rights on physical capital, which led to the socialist and communist doctrines. Similarly, we now witness complaints about intellectual property rights (IPRs). Given that they tend to increase the income of knowledge producers such as Bill Gates, are they not a factor of inequality? Would it not be fairer to put limitations on IPRs, which would reduce the income of very rich people while allowing poorer people to consume knowledge-intensive goods at a cheaper price? From a global perspective, this argument is compounded by the observation that poor countries do not seem to afford important goods such as drugs because their price is too high, due to the monopoly power of the patent's owner. The economist's standard answer to these arguments would a priori look as follows: there is a dichotomy between distributive concerns and efficiency. The former are best taken into account by means of taxes and transfers. IPRs, on the other hand, make sure that innovation is remunerated. Even under infinitely lived, perfectly enforceable patents, there are reasons to believe that the private return to innovation is too low—since part of the social return is appropriated by inframarginal consumers. Therefore, let us not touch IPRs, but instead redistribute money to the poor. This argument seems valid provided redistribution is not distortionary. However, nondistortionary redistribution only exists on paper. In practice, if the rich's income is derived from IPRs, we expect redistribution from rich to poor to affect occupational choice and reduce the overall level of innovation, just like limitations on IPRs. As long as there is a cost of acquiring human capital in order to specialize in knowledge production, a reduction in the income gap between knowledge producers and knowledge consumers will negatively affect the return to that investment. This brings the following question: if redistribution has such distortionary effects, could we consider limitations to IPR as an alternative redistributive tool? Such limitations do not increase the poor's nominal income, but they increase their real income by making goods cheaper. In other words, they reduce the static inefficiency due to monopoly power, which benefits workers whenever their income is not indexed on IPRs. They also reduce the wages of knowledge workers that are directly indexed on the monopoly rents associated with patents, and thus, they reduce innovation, but so does redistribution, which has no effect on static efficiency. Thus, a social planner which cares about income distribution may in principle want to use a reduction in IPRs rather than redistributive transfers, which seems to vindicate the arguments of those who object to intellectual property. In this paper, I build a simple model of horizontal innovation in the fashion of Dixit and Stiglitz (1977), Romer (1990), and Grossman and Helpman (1991) with heterogeneous workers and imperfect enforcement of IPRs, in order to analyze whether this intuition is valid. Using numerical simulations, I look at the effects of both redistribution and limits to IPR on innovation, occupational choice, income distribution, and welfare. While intellectual property is clearly inegalitarian, this is much more because it benefits the rich rather than because it harms the poor. In the model, reducing it does not increase welfare. For all relevant parameters that were tried, the model predicts that the optimal level of IPR enforcement is the maximum one. Therefore, despite the adverse effect of redistribution on innovation, the traditional economist's view is confirmed: redistribution always dominates restrictions to IPRs. The explanation is as follows. While restricted IPRs reduce goods' prices, they also reduce product variety. For monopoly pricing to reduce welfare by enough, it must be that there is enough complementarity between goods that are patented and priced at a monopoly markup and goods that are not patented and priced at marginal cost. Otherwise, people will largely substitute the latter for the former, and monopoly pricing is not very harmful. However, complementarity between goods also means that product diversity is more valued, so that at all parameter values, the effect of reduced diversity slightly dominates that of reduced monopoly power. This makes it impossible for limitations to IPR to increase welfare, while redistribution may achieve that goal if the social planner cares enough about inequality, since it directly increases the poor's purchasing power.

This paper's analysis confirms the basic doctrine of mainstream economics, i.e., that equity concerns are best addressed by using taxes and transfers rather than distorting markets. Reduced property rights on innovation do not seem to be a good idea to enforce a more equitable distribution of income, despite the fact that IPRs generate a static inefficiency associated with monopoly pricing. The reason is twofold. First, alleviating that inefficiency does not particularly help the poor relative to other agents. Second, the dynamic inefficiency, due to imperfect appropriation of an invention's social surplus by the innovator, seems much stronger, and it is reinforced by lower levels of intellectual property. This suggests that in order to vindicate the idea that limitations on IPRs are justified on grounds of fairness, one has to explore other routes.9 One possibility is to consider that as a form of in-kind redistribution in a world where monetary transfers are difficult or impossible. One argument implicit, or sometimes explicit, about reducing IPRs in the context of helping LDCs is that monetary redistribution to these countries, which, as the preceding analysis suggests, is likely to work better, is in fact diverted by local interest groups and does not go to those who are really in need. By contrast, free licenses for producing valuable drugs would directly help the poorest. Arbitrage could be prevented by preventing these drugs from being reexported. The merits of this argument is unclear. It rests on one kind of redistribution being more “corruption-proof” than the other. It is not clear why it would be so much easier for local authorities to divert aid money rather than setting up an infrastructure in order to bypass the reexport ban for their own profit. It is also not clear that the poor would not lose in the long run because of lower innovation, as is the case here.