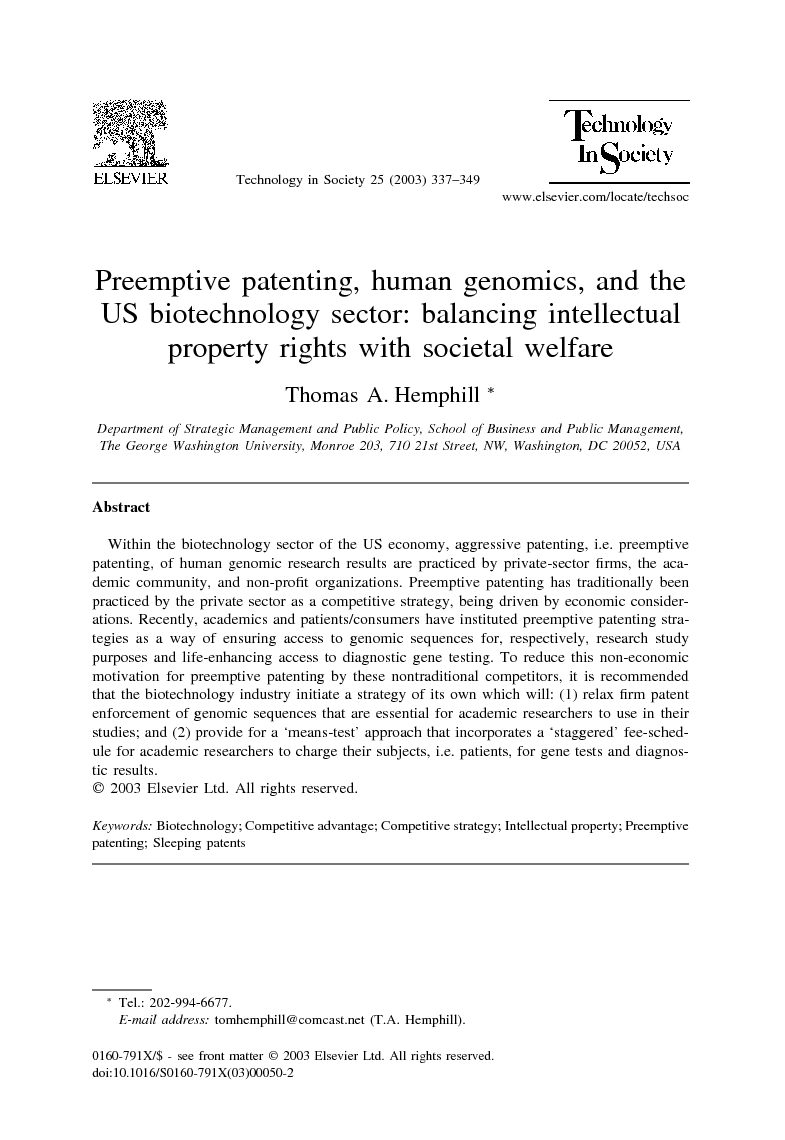 Within the biotechnology sector of the US economy, aggressive patenting, i.e. preemptive patenting, of human genomic research results are practiced by private-sector firms, the academic community, and non-profit organizations. Preemptive patenting has traditionally been practiced by the private sector as a competitive strategy, being driven by economic considerations. Recently, academics and patients/consumers have instituted preemptive patenting strategies as a way of ensuring access to genomic sequences for, respectively, research study purposes and life-enhancing access to diagnostic gene testing. To reduce this non-economic motivation for preemptive patenting by these nontraditional competitors, it is recommended that the biotechnology industry initiate a strategy of its own which will: (1) relax firm patent enforcement of genomic sequences that are essential for academic researchers to use in their studies; and (2) provide for a ‘means-test’ approach that incorporates a ‘staggered’ fee-schedule for academic researchers to charge their subjects, i.e. patients, for gene tests and diagnostic results.

Biotechnology is defined as “the use of the cellular and molecular processes to solve problems or make products” [1]. Broadly speaking, this definition includes firms or organizations that employ cells and biological molecules for applications in medicine, agriculture, and environmental management [2]. Often cited as the genesis of the biotechnology industry, the 1980 United States (US) Supreme Court decision Diamond v. Chakrabarty held that “anything under the sun that is made by the hand of man” was eligible subject matter for patenting. 1 In this particular case, Dr. Ananda Chakrabarty’s invention of new microorganisms (‘genetically engineered bacterium’) which do not exist in nature were deemed a new “invention” and therefore patentable. Over the last two decades, the biotechnology sector of the US economy has flourished with hundreds of new biotechnology drugs, vaccines, medical diagnostic tests, foods, and environmental-related products entering the marketplace.2 By 2001, there were 1379 US biotechnology companies employing 174,000, of which 339 firms are publicly held. Financially, revenues for the biotechnology industry have increased by over 300%, from $8 billion in 1992 to $25 billion in 2000. Biotechnology is also one of the most research-intensive industries, with US companies having spent $13.8 billion on research and development (R&D) in 2000. To place this industry expenditure in perspective, the top five biotechnology companies spent an average of $89,400 per employee on R&D in 1999, compared to an average of $37,200 per employee spent by the leading pharmaceutical companies the same year. Within the medical subfield of biotechnology, human gene (or genomic) research has been in the forefront of a decade-long national effort called the Human Genome Project (HGP) begun in 1990 and jointly funded by the US Department of Energy and the National Institutes of Health. A gene is the fundamental physical and functional unit of heredity and consists of tightly coiled threads or polymers of deoxyribonucleic acid (DNA). In contrast, a genome is the complete set of genetic instructions carried within a cell or an organism. An international research program, HGP is designed to construct detailed genetic and physical “maps” of the human genome to determine the sequence of 3 billion chemical bases (i.e. nucleotides) in human DNA, to localize the estimated 50,000–100,000 genes within the human genome (although more recent estimates are closer to 40,000 [4]), and to perform similar analyses on the genomes of several organisms used extensively in research laboratories as model systems [5]. The discovery of new genes is anticipated to provide invaluable tools for improving disease prediction, diagnosis, and treatment. Along with Celera Genomics, a private corporation, HGP announced a completed working draft of the human genome on June 26, 2000. Genomic research in the private sector, while sharing many of the same goals as the publicly funded HGP, further seeks to use this genetic map to commercially develop therapeutically useful compounds and disease treatment strategies. As in any scientific and technology-based industry, the ability to protect one’s invention from imitation is of paramount importance to the biotechnology industry. To that end, the US biotechnology industry has been a strong supporter of intellectual property rights (patents) as pertains to its ‘inventions.’ This aggressive protection of patent rights by the private sector has resulted in controversy over the applicability of patent protection to genomic invention, specifically as to how such legal protection impedes broader social benefits. For example, as will be discussed in greater detail later in this article, aggressive patent enforcement by biotechnology firms has resulted in the increasing use of ‘preemptive patenting’ by academic and non-profit organizations to ensure that new discoveries have increased accessibility and utility in the scientific and medical research communities. The protection of intellectual property rights in the biotechnology industry, while vigilant, must not be accomplished at the expense of the general welfare of society. This cost–benefit analysis to find the right balance between private and public interests requires the biotechnology industry to take the lead in creating an industry strategy that both supports patent protection and royalties while simultaneously confronting the real distributive concerns of other stakeholders (medical researchers and patient/consumers of diagnostic tests) in society. A suggested biotechnology industry approach will be offered in the conclusion of the article. But before proceeding directly to addressing the controversies surrounding preemptive patenting in genomic research, it will be helpful to place this concept in perspective by offering an overview of the US patent system and its importance to the development of the nation’s biotechnology industry.

The patent system has provided a limited protection for inventors to recoup the financial remuneration that is necessary to encourage further innovation by individuals and companies. Economists, such as Mansfield et al. [21], have uncovered evidence that the majority of patents (60%) are imitated within 4 years, providing a truncated period to recoup investment. However, Levin [23] has found empirical evidence that patent protection provides sustained competitive advantage in two industries (specialty chemicals and pharmaceuticals) sharing similar (‘structural’) patent protection characteristics with that found in the biotechnology industry. The recently adopted USPTO guidelines for determining the utility of gene-related inventions will offer increased sustained competitive advantage for the biotechnology industry. Contrarily, this emphasis on a strict utility requirement for granting genomic patent clashes with the desires of many scientists to protect their findings based on the potential function or utility of a particular genomic sequence. Nevertheless, this USPTO clarification regarding gene-related inventions only strengthens the purpose of the patent system—that is, to provide patent holders the ability to prevent infringement by competitors, recoup their investment by sustaining competitive advantage, and encourage further innovation in the biotechnology sector. Yet the US biotechnology industry may be faced with further international assaults on its patents. It is being reported that the Cuban government (whose pharmaceutical and biotechnology industry consists of more than 20 research and production centers [33]) intends to imitate and sell the patented genomic sequences to countries not recognizing the Paris Convention for the Protection of Industrial Property, thus allowing for the manufacture and sale of ‘black market’ pharmaceuticals and genomic diagnostic tests. As a traditional competitive strategy, preemptive patenting has been employed by firms to maintain their monopoly power by patenting new technologies before potential competitors, regardless of whether they intend to bring the invention to market. While US biotechnology firms continue to be criticized for their zealous patent enforcement and adverse impact on consumer welfare, the academic and consumer non-profit competitive response to biotechnology firms’ behavior does not warrant the same criticism. The advent of an aggressive, preemptive patenting strategy by the biotechnology industry has resulted in an expanded role for preemptive patenting in the academic community. Unlike the traditional economic (profit) motivation driving biotechnology firms, the academic community (located in private and public non-profit organizations) is motivated to acquire preemptive patents for a dual purpose: first, to allow unhindered scientific access to, and experimental manipulation of, genomic sequences, and second, to enhance the ability of researchers to include a wide variety of test subjects in their studies. Also, cancer patients are establishing non-profit foundations where the patent rights of genomic inventions are being assigned, thus allowing patients low-cost access to genetic diagnostic tests. Furthermore, the pharmaceutical industry has adopted a competitive variation on preemptive patenting. Instead of acquiring patents, the pharmaceutical industry pooled financial resources to form the SNP consortium whose purpose is to preempt the biotechnology industry from acquiring patents by disclosing genomic sequences into the public domain. Thus, the working definition of preemptive patenting has now been expanded to include both economic and non-economic motivations, and is being championed by academic, industry, and consumer non-profit organizations—formerly customers (vis-à-vis licensing) of the biotechnology industry. What defensive strategies can biotechnology firms implement to counter the preemptive patenting efforts now undertaken by the academic and consumer stakeholders? To begin with, the biotechnology patent controversies can best be addressed from an industry perspective. A biotechnology industry competitive strategy could involve a further relaxation of firm enforcement of patented discoveries that can be used by academic researchers. This industry strategy, if embraced, could help stymie renewed academic efforts to acquire their own preemptive patents. For example, the Biotechnology Industry Organization (BIO) could develop an industry-wide protocol that expands the ability of academic researchers to use their patented discoveries in experimental ways, yet still protect firm rights to prevent commercialization. Furthermore, from a social responsibility perspective, the industry can also address the financial barriers encountered by academic researchers that precludes some patients (and research test subjects) from access to gene testing, and cancer patients, who believe they must patent genomic sequences and offer them to non-profit foundations so as to remain financially accessible. The industry association, BIO, can develop a financial ‘means-test’ approach that incorporates a ‘staggered’ fee-schedule for academic researchers to charge their study subjects for gene testing, and further, establish a philanthropic fund available to those individuals who may show exceptional financial need to pay for these study-based, diagnostic gene tests.