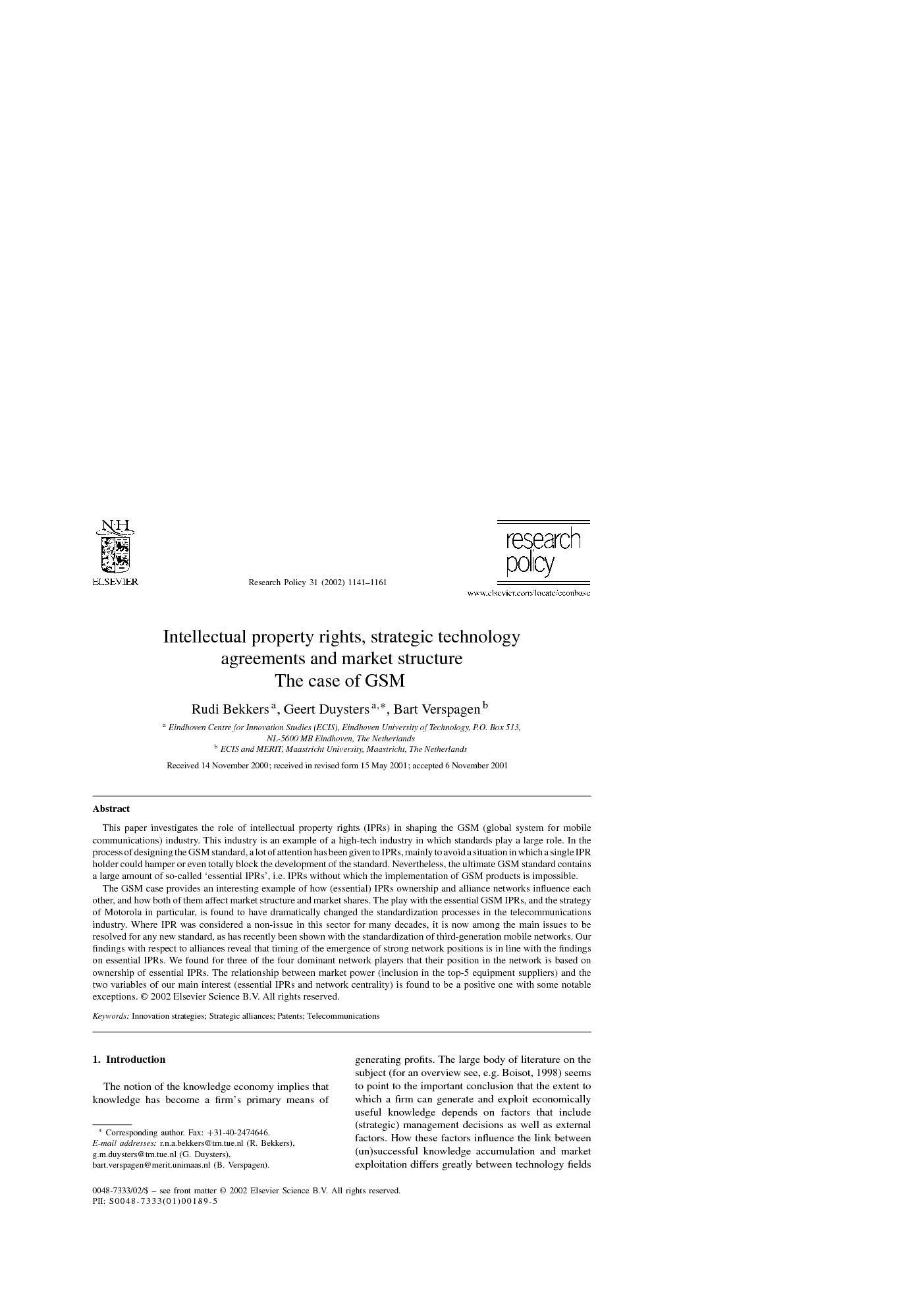 This paper investigates the role of intellectual property rights (IPRs) in shaping the GSM (global system for mobile communications) industry. This industry is an example of a high-tech industry in which standards play a large role. In the process of designing the GSM standard, a lot of attention has been given to IPRs, mainly to avoid a situation in which a single IPR holder could hamper or even totally block the development of the standard. Nevertheless, the ultimate GSM standard contains a large amount of so-called ‘essential IPRs’, i.e. IPRs without which the implementation of GSM products is impossible. The GSM case provides an interesting example of how (essential) IPRs ownership and alliance networks influence each other, and how both of them affect market structure and market shares. The play with the essential GSM IPRs, and the strategy of Motorola in particular, is found to have dramatically changed the standardization processes in the telecommunications industry. Where IPR was considered a non-issue in this sector for many decades, it is now among the main issues to be resolved for any new standard, as has recently been shown with the standardization of third-generation mobile networks. Our findings with respect to alliances reveal that timing of the emergence of strong network positions is in line with the findings on essential IPRs. We found for three of the four dominant network players that their position in the network is based on ownership of essential IPRs. The relationship between market power (inclusion in the top-5 equipment suppliers) and the two variables of our main interest (essential IPRs and network centrality) is found to be a positive one with some notable exceptions.

The GSM case provides an interesting example of how (essential) IPRs ownership and alliance networks influence each other, and how both of them affect market structure and market shares. We have shown how the GSM market has become dominated by five major firms in the late 1990s: Ericsson, Nokia, Siemens, Motorola and Alcatel. Together, these five firms control more than 85% of the European GSM market (which is the largest in the world). We have shown how two of these firms (Motorola and Nokia) are characterized by both a strong position with regard to the ownership of essential IPRs and a central position in the network of strategic technology agreements in mobile communications. Two other firms score relatively high on at least one of these two variables: Ericsson with regard to network centrality (but not essential IPRs) and Alcatel with regard to essential IPRs (but not network centrality). Siemens has neither a strong position in essential IPRs not in network centrality. The relationship between market power (inclusion in the top-5 equipment suppliers) and the two variables of our main interest (essential IPRs and network centrality) is thus at best a positive one with some major exceptions. One is thus tempted to conclude that a pure quantitative analysis of the relationship between these three variables leaves important parts of the story of how these five companies came to dominate the GSM market untold. The key to understanding these ‘missing links’ largely lie in the activities of one company, Motorola, during the period just after the technical GSM standard had been set. We identified three periods in the history of GSM. The first is a pre-standard period (until February 1987). In this period, there was huge technological uncertainty on which of the competing technologies would be adopted as the standard. Thus, what later became ‘essential’ IPRs (patents) to the GSM standard from this period, were at the time just one of a number of options for the future. A high number of (with hindsight, essential) patents during this period did not necessarily lead to later dominance in the industry, as is shown by the evolution of the market position of Motorola and Philips. Philips was the company with most essential patents from the pre-standard period. However, it did not play a major role in the production and sales of GSM equipment afterwards, mainly because of strategic choices of the management. Its strong early position in terms of technology and patents did, however, lead to early dominance of the technology alliances network. But this position waned when other players started to develop the GSM standard later on. Motorola, on the other hand, was able to use its relatively strong position in the pre-standard age in the period in a more vigorous way afterwards. During the period until 1991, which we characterize as the period in which the basic standard was developed, Motorola built up a strong portfolio of essential patents in GSM. Other firms, including those in Europe most involved with the development of GSM (e.g. Ericsson, Siemens, Alcatel), did not follow an aggressive patenting strategy, basically because they were used to manners of conduct in a pre-liberalization European market (Ericsson), or simply because they did not have the inventions yet (Alcatel, Nokia). By using the negotiation power that came with its patent portfolio, Motorola could dictate its licensing conditions to all firms. The company thus imposed a market structure by conducting exclusive cross-license agreements with a selected number of other parties on the market. These parties were selected because their IPRs were valuable to Motorola (not only essential patents, but also others), or because their product line complemented that of Motorola. Also Motorola took the position of firms in the alliance network into account when selecting its cross-licensing partners (Ericsson). As a result, the importance of Motorola in the network of strategic alliances increased drastically in the late 1980s. Firms that took part in the cross-licensing agreements (i.e. Ericsson, Nokia, Siemens, Motorola, and Alcatel) dominate the market for GSM infrastructure and terminals. They hold well above 85% of the total market, which is estimated to be worth more than 100 billion US$.24 Only 5 years after the first commercial products were introduced on the market, other companies, including those from the far east and from the American continent, gradually succeed in capturing some part of this huge market. In the field of technology and essential patenting, this process of catching-up took the form of a number of additions to the standard in the form of more enhanced equipment or services. We denote this as the third phase in the history of GSM. This is the period when some of the major European firms (most notably Alcatel, Nokia and Telia) took out large amounts of essential patents in GSM. This is also the period during which Nokia and Ericsson greatly improved their position in the alliances network. The play with the essential GSM IPRs, and the strategy of Motorola in particular, appears to have dramatically changed the standardization processes in the telecommunications industry. From 1992 on, many firms have intensified their patenting activities, hoping to obtain essential IPR for future standards or additions to existing standards. Where IPR was considered a non-issue in this sector for many decades, it is now among the main issues to be resolved for any new standard, as has recently been shown with the standardization of third-generation mobile networks.25 Thus, within the major telecommunications firms, managers seem to have learned their lesson on the strategic importance of IPRs. However, at the level of the public interest in standard setting, the increasingly sharp negotiations about essential IPRs are not necessarily a positive development.