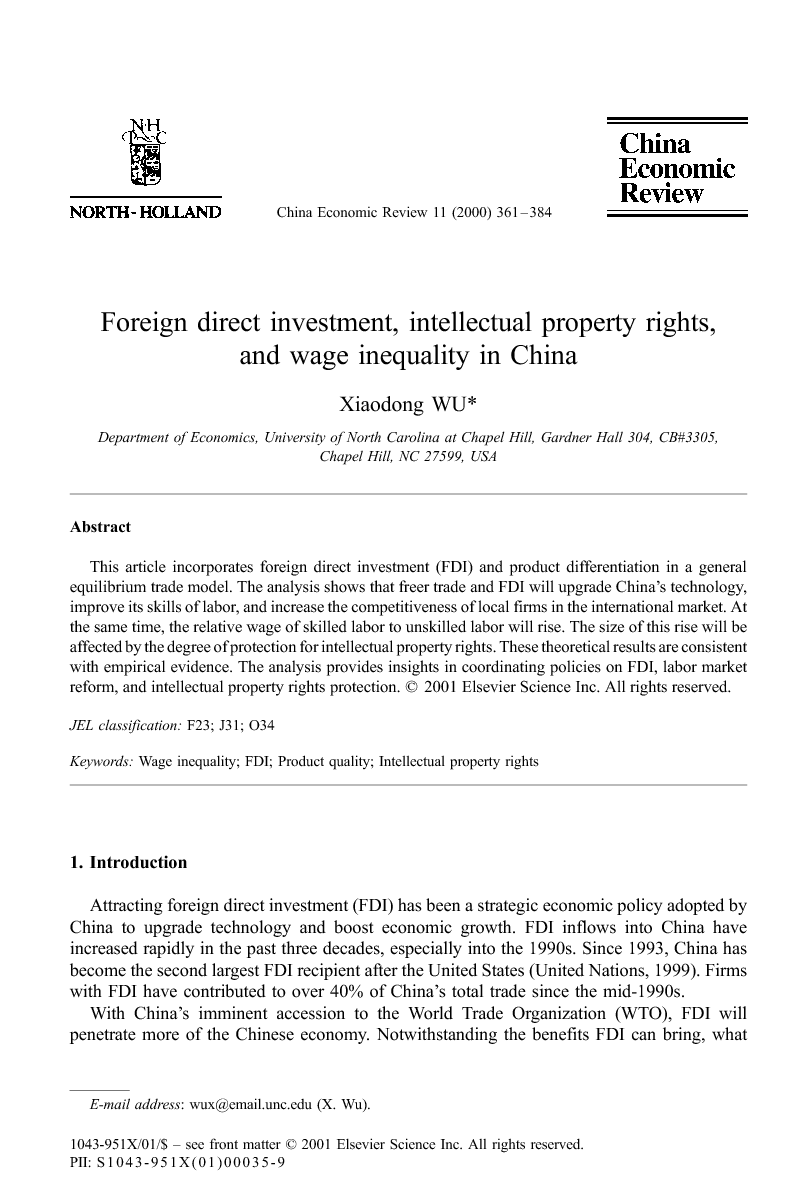 This article incorporates foreign direct investment (FDI) and product differentiation in a general equilibrium trade model. The analysis shows that freer trade and FDI will upgrade China's technology, improve its skills of labor, and increase the competitiveness of local firms in the international market. At the same time, the relative wage of skilled labor to unskilled labor will rise. The size of this rise will be affected by the degree of protection for intellectual property rights. These theoretical results are consistent with empirical evidence. The analysis provides insights in coordinating policies on FDI, labor market reform, and intellectual property rights protection.

This article develops a general equilibrium trade model and shows that the relative wage of skilled labor to unskilled labor in China will increase as China opens more market and attracts more FDI into high-tech sectors. This extends the standard Stolper–Samuelson theory with homogeneous products and technologies, which predicts that the relative wage of skilled labor to unskilled labor can only decrease in the absence of product differentiation. As more FDI flows into the Chinese economy, especially to sectors such as telecommunication, information technology, and banking and financial services, as included in China's recent WTO agreements with the US and EU, the gap between skilled and unskilled labor is likely to increase in the future. There is, however, no reason to fear the wage gap. Technology diffusion and quality upgrade increase the demand for skilled labor and change division of labor. As China integrates further into the global economy and moves from exporting labor-intensive to increasingly more skill/capital-intensive goods, this trend of relative wage increase of skilled labor is only to continue. It is important though that we understand the impact of FDI on wages, so that we can minimize the negative effect, and maximize the benefits associated with FDI. The theoretic results of this article demonstrate that FDI can upgrade technology, improve the skills of China's work force, enhance the product quality of local industries, and increase their competitiveness in international markets. China stands to gain from FDI inflows. But often, authorities offer more incentives to high-tech FDI in differentiated sectors, which will increase wage inequality between skilled and unskilled labor. One policy implication that can be drawn from the analysis in the article is that elimination of special treatment of FDI in those sectors will help reduce the negative impact on income distribution and provide a level playing ground for stable long-term FDI. Given the upward pressure on wages and the competition for labor brought about by FDI, it is also important to reform the labor market and wage system to empower domestic firms with more autonomy in hiring and firing workers and in setting wages, so that domestic firms are not disadvantaged in competition. Given the mounting unemployment problem, reforms of SOEs have been understandably cautious, especially with regard to labor and wage decisions. But delaying the reform process can only stall problems for the future. Experience of the private sector in recent years proves that market economy is the source of growth and employment. The analysis in this article also provides insights in the role of intellectual property rights protection on FDI and wage inequality. The results show that stricter intellectual property rights protection will deliver higher qualities for China's exports and hence lead to better terms of trade, and at the same time, will slow the rise of relative wages of skilled labor, and protect the welfare of unskilled labor. The trade-off is that stricter intellectual property rights protection is likely to expose domestic firms to more competition from FFEs and greater danger of losing market shares to FFEs. However, technology diffusion by FDI can also spur local firms to develop newer and better products. Strengthening the protection of intellectual property rights should clearly be an integral part of China's FDI policy.