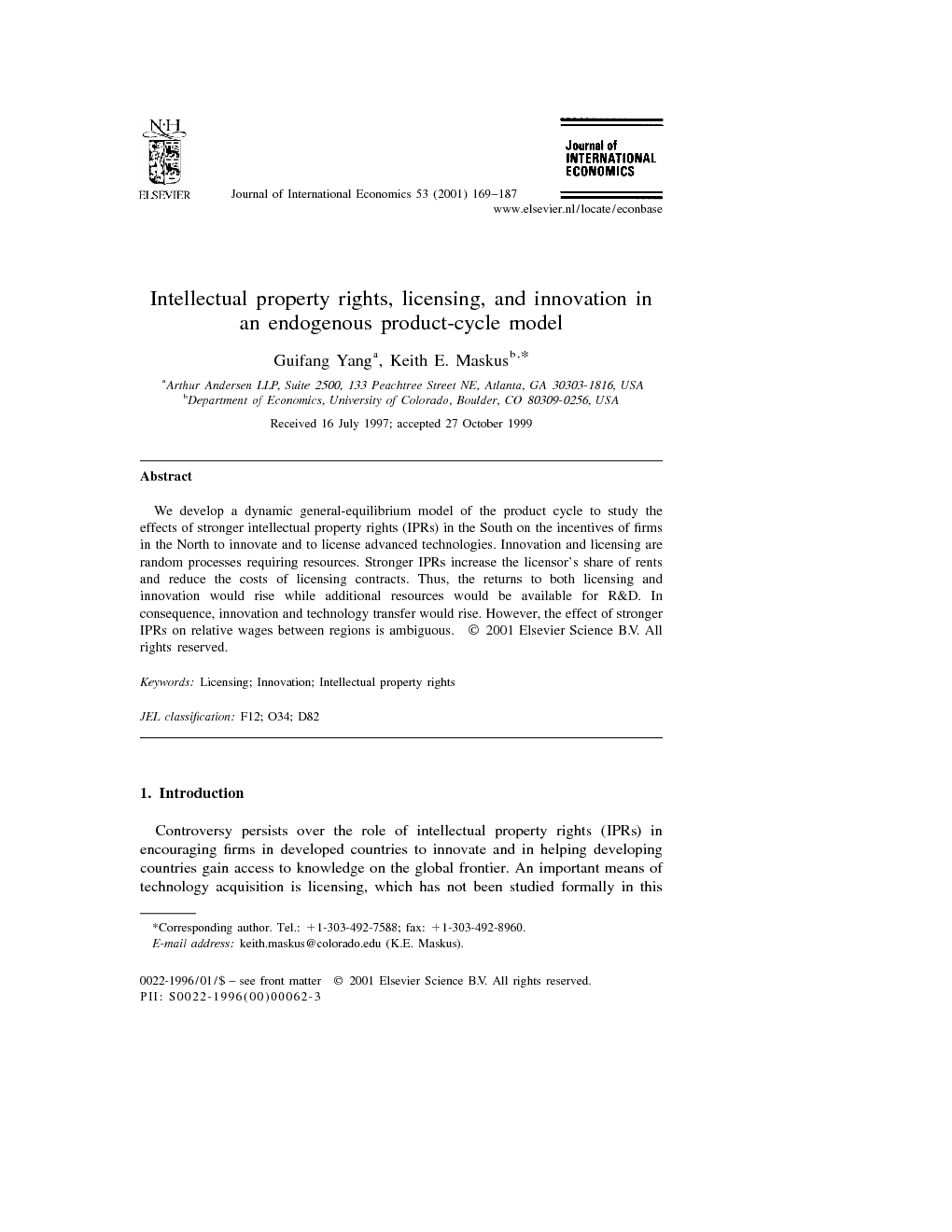 We develop a dynamic general-equilibrium model of the product cycle to study the effects of stronger intellectual property rights (IPRs) in the South on the incentives of firms in the North to innovate and to license advanced technologies. Innovation and licensing are random processes requiring resources. Stronger IPRs increase the licensor’s share of rents and reduce the costs of licensing contracts. Thus, the returns to both licensing and innovation would rise while additional resources would be available for R&D. In consequence, innovation and technology transfer would rise. However, the effect of stronger IPRs on relative wages between regions is ambiguous.

Controversy persists over the role of intellectual property rights (IPRs) in encouraging firms in developed countries to innovate and in helping developing countries gain access to knowledge on the global frontier. An important means of technology acquisition is licensing, which has not been studied formally in this context. In this paper we develop a dynamic general-equilibrium product-cycle model to analyze the effects of Southern IPRs on incentives of Northern firms to innovate and to license state-of-the-art technologies to the South. Helpman (1993) first modeled the dynamic effects of IPRs in a general-equilibrium framework with an innovative North and an imitative South. He finds that stronger IPRs would diminish both the Northern rate of innovation and Southern welfare when imitation is the only channel of technology transfer. Thus, in the absence of licensing, strengthened IPRs would raise imitation costs, restrict technology diffusion, and reduce long-run incentives to innovate. This pessimistic conclusion was reinforced by Glass and Saggi (1995), who allow both imitation and foreign direct investment (FDI) as channels of technology transfer. They show that a strengthening of Southern IPRs would reduce rates of innovation and imitation and also would decrease the flow of technology transfer. In a more positive vein, Lai (1998) finds that the effects depend crucially on the channel of technology transfer. Stronger IPRs in the South would expand technology transfer and innovation under FDI but would have opposite effects if production were transferred through imitation1. In this literature imitation and FDI are the primary sources through which the South may gain access to the North’s advanced technology. Licensing has been largely ignored. In this paper we focus on licensing as the means by which the South gets advanced technology. Licensing is conceptually and practically important for a number of reasons. First, in some situations, imitation may be sufficiently difficult that it is not profitable (Bagchi et al. 1984). Second, recent empirical evidence suggests that the volume of arm’s-length technology transfers is rising (Mansfield, 1995). Furthermore, government policies in some technology-importing countries prefer licensing to equity investment as the mode of technology transfer (Contractor and Sagafi-Nejad, 1981). In our model the Northern innovative firm first chooses the intensity of effort it devotes to innovation. Once the innovation is successful, it chooses whether to license. The advantage of licensing technology to the South is higher instantaneous profits due to lower wages there. However, licensing incurs costs, including those involved in contract negotiation and in performing various activities to ensure the transfer of the necessary technology know-how. Furthermore, the licensor has to give up some rents to the licensee in order to deter imitation. Therefore, the Northern firm needs to strike a balance between saving labor costs, sacrificing rents, and incurring licensing-transfer costs. We argue that stronger intellectual property rights in the South both would reduce the imitation risk faced by innovative Northern firms and would create an improved legal framework for the enforcement of licensing contracts. The former process would reduce the imitation risk from the licensee, allowing the licensor to deter imitation by giving up a smaller share of the licensing rents to the licensee. The latter process would lower the legal costs associated with establishing and policing arm’s-length licensing relationships. Put simply, the degree of IPRs protection determines not only the total economic returns from licensing (the size effect) but also the distribution of the returns between two parties (the distribution effect). Through providing a higher rent share and reducing licensing costs, more rigorous IPRs would alter Northern firms’ incentives to license and, in turn, to innovate. Results from the model show that stronger IPRs in the South would generate a higher rate of innovation in the North and a higher rate of licensing to the South. Licensing would be encouraged in order to take advantage of lower labor costs. The intuition for these results is as follows. First, when economic returns to licensing increase due to decreased licensing costs, there would be a direct rise in the economic returns to innovation as well, providing firms more incentive to license and to innovate. Second, stronger IPRs protection in the South would enhance the licensor’s share of licensing rents, thereby encouraging licensing and innovation for the same level of licensing costs. Third, since licensing would require fewer resources, more labor would be freed up for innovation in the North. Furthermore, when more production is transferred to the South, additional resources would be freed in the North for innovation. However, stronger IPRs in the South would have ambiguous effects on the relative wage between regions. If stronger IPRs led to a large magnitude of technology transfer, the Southern relative wage would rise. If a small amount of production moved, the Southern relative wage would fall. Our model is similar in spirit to product-cycle models in which innovation and technology transfer are the key processes for understanding the spread of production and technological advancement. Its inspiration is Vernon (1966), in which these mechanisms are described but not formally modeled. It is also related to Krugman (1979) and Dollar (1986) in which technical change and technology transfer are exogenous processes. However, we present a quality-ladders model with endogenous innovation and licensing, thereby integrating licensing into the theory of endogenous product cycles (Grossman and Helpman, 1991). The remainder of this paper is organized as follows. In Section 2 we describe the model and derive the steady-state equilibrium. In Section 3 we study the steady-state comparative statics of IPRs. In section 4 we decompose the results into size and distribution effects and study the impact on the relative wage. We conclude in Section 5.

In this paper we develop a simple dynamic general-equilibrium version of the product-cycle model to study the effects of stronger IPRs in the South on the incentives of firms to innovate and license new technologies. The cost of technology transfer depends on the degree of IPRs protection in the South. By reducing licensing costs, stronger IPRs would lead to higher economic returns to the licensor and would liberate resources for innovation, thereby leading to both higher innovation and licensing. Furthermore, stronger IPRs protection in the South would raise the rent share of the licensor and therefore would encourage additional licensing and innovation. The net effect of stronger IPRs on the relative wage would be ambiguous because innovation and licensing have potentially opposing impacts on demand for labor in North and South. Our results are more optimistic about the possible impacts of stronger intellectual property rights in developing countries than are those in Helpman (1993) and Glass and Saggi (1995). Helpman shows that in the long run the South could suffer from stronger IPRs because of higher imitation costs and the consequent reduction in technology availability. Glass and Saggi similarly show that more protective IPRs could decrease the flow of technology transferred to the South. Although our model is not directly comparable with theirs, we show that tighter IPRs could actually increase the rate of innovation and licensing. This result stems from the plausible notion that stronger property rights would reduce the costs of making and enforcing licensing contracts and would increase the rent share of the licensor. In turn, the returns to both licensing and innovation would rise, while additional labor would be made available to effect these processes. The Southern relative wage could rise or fall. We believe that these outcomes are more consistent with the prevailing notion among policy makers that inward technology transfer would rise in nations that adopt stronger IPRs. They also help explain survey findings demonstrating that licensing responds positively to patent rights in developing countries (Mansfield, 1994). Our results bolster Lai’s (1998) finding that tighter IPRs would increase innovation and technology transfer. However, his paper employs a product-variety model with FDI as the channel through which transfers are made. Our endogenous product cycle model introduces licensing as the transfer mechanism.