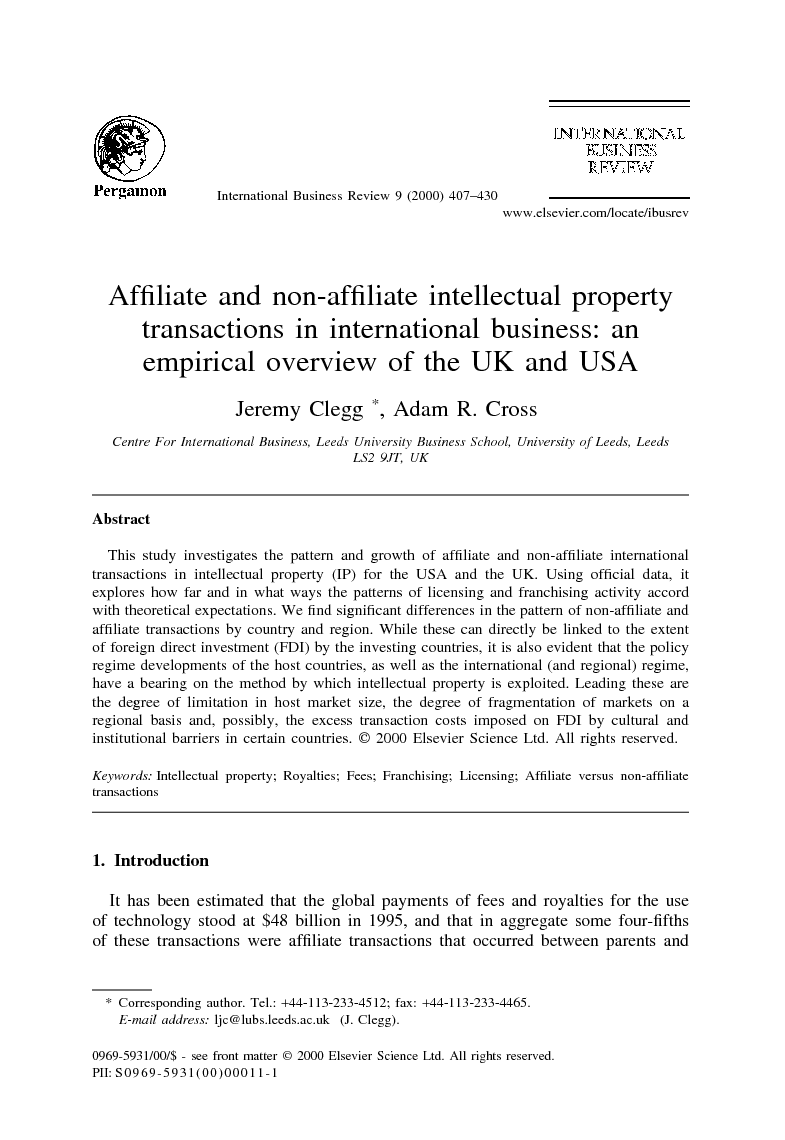 This study investigates the pattern and growth of affiliate and non-affiliate international transactions in intellectual property (IP) for the USA and the UK. Using official data, it explores how far and in what ways the patterns of licensing and franchising activity accord with theoretical expectations. We find significant differences in the pattern of non-affiliate and affiliate transactions by country and region. While these can directly be linked to the extent of foreign direct investment (FDI) by the investing countries, it is also evident that the policy regime developments of the host countries, as well as the international (and regional) regime, have a bearing on the method by which intellectual property is exploited. Leading these are the degree of limitation in host market size, the degree of fragmentation of markets on a regional basis and, possibly, the excess transaction costs imposed on FDI by cultural and institutional barriers in certain countries.

It has been estimated that the global payments of fees and royalties for the use of technology stood at $48 billion in 1995, and that in aggregate some four-fifths of these transactions were affiliate transactions that occurred between parents and their affiliates within multinational enterprises (MNEs) (UNCTAD, 1997). For the USA, the annual compound growth rate of balance of payments in receipts of royalties and fees stood at 12.6% in the decade 1986–96. This growth exceeds that of foreign direct investment (FDI) or merchandise exports (Contractor, 1999). This signifies that the international transfer of intellectual property (IP) has been pulling ahead of other international transactions. Yet, little is known, and still less understood, about what accounts for this. Of course, as levels of FDI rise within the world, it is to be expected that so too will the levels of affiliate-related transactions in intellectual property. However, firms also service foreign markets using non-affiliate licensing agreements with independent local firms.1 As we shall see, non-affiliate transactions in total have also been rising in value. But, what shapes the use of the non-affiliate versus the affiliate route for the international transfer of intellectual property in different markets? In interpreting these transactions it is important not be transfixed by the relatively modest overall magnitude of non-affiliate trade. Rather, it is helpful to look at such country detail as is available. From this, it becomes evident that the importance of these transactions exhibits substantial variation. A review of the empirical evidence on the choice of international non-affiliate versus affiliate intellectual property transfers can tell us something about the common issues facing international licensors and franchisors in world markets. Accordingly, this paper investigates the usage of non-affiliate transfers of intangible assets relative to internal transactions, by host markets and region. There is a high degree of statistical concentration in the geographical distribution of receipts linked to intellectual property. A few developed countries account for the bulk of the world's exports of technology and related services, to an extent that exceeds the concentration in trade in visible goods (merchandise trade) and even in FDI. Collectively, firms from the top five source countries accounted for 89.9% of all receipts in 1995 (UNCTAD, 1997). The USA dominates, with 56% of global receipts, followed by Japan (12.5%), the United Kingdom (11%), Germany (5.8%) and France (4.6%). This concentration is a reflection of the fact that the bulk of the world's technology and transferable firm-specific assets currently reside in the hands of firms from the leading developed countries.2 In this study, we analyse receipts for the international sale of rights to intangible assets for the USA and the UK. In so doing, we capture 67% of the world's international receipts in respect of intellectual property. The paper is organised as follows. First, we briefly review the literature on international business connected to licensing and franchising, the two most common routes for the international transfer of intellectual property. Areas of similarity and contrast between these two routes are highlighted. We then consider the role of internalisation theory, transaction costs economics and the model of optimal market servicing in explaining patterns of licensing and franchising activity. These theoretical approaches are then related to observed patterns of royalty and fee receipts for transferred technology received by US and UK firms, for the periods 1986–1998 and 1977–1992, respectively (i.e., subject to temporal limitations in time-series data collected by the relevant agency). The analysis is conducted by considering the ratio of non-affiliate to affiliate receipts by country and region. Conclusions are then drawn.

In the theory of international business, exporting (trade), non-affiliate transfers and FDI each represent routes of foreign market servicing. In this study we have focused on the ratio of non-affiliate to affiliate transfer of intellectual property. This is an interesting choice because both these forms of international business require production within the foreign market to be served, unlike exporting. Therefore, we have concentrated on the factors that shape the use of internal versus external markets in host locations. While the level of affiliate transfers clearly hinges on the size of the standing stock of FDI, and the degree of sophistication of large multinationals, the variations between host regions indicate that the qualities of these regions condition firms' strategies towards them. An important inference from the US and UK data is that some suitable adaptation of the standard model of optimal market servicing applies to the large MNE faced with market entry and development decisions in alternative geographical and regional markets. The attraction and importance of the European Union as an investment location means that US firms preferentially use the affiliate route of intellectual property transfer to Europe. This may also be shaped by the degree of competition in the European market, which militates in favour of an affiliate strategy.9 While the EU dominates the global strategy of US firms, US firms employ the non-affiliate route relatively more elsewhere, particularly in small markets, and markets that are not regionally integrated. Eastern European countries have liberalised and stabilised their markets and are now rapidly moving towards integration with the EU. This is encouraging US firms to migrate from non-affiliate to affiliate strategies. For UK firms, while the weighted (or world) non-affiliate ratio for intellectual property transfer shows a secular decline as UK firms deepen their investment on a regional basis, analysis of other country groupings shows a clear retention of the role of the non-affiliate route. This paper concludes that while there are many well-documented factors at the level of the firm that dispose enterprises towards non-affiliate contractual transfers of intellectual property, there are important factors specific to markets that also shape the strategy of all firms. Leading these are the degree of limitation in the size of the host market, the fragmentation of markets on a regional basis (i.e., the absence of the effective pursuit of regional economic integration), and possibly the excess transaction costs imposed on FDI by cultural and institutional barriers in certain countries. Although the official data on international licensing and, especially, franchising are inadequate, there are lessons for the licensing and franchising research agenda to be drawn from our study. The prime research question is how international licensors and franchisors react to regional economic integration, and the changes that ensue, such as increased competition. Do they react with higher commitment modes and, if so, under what conditions does this include FDI; that is, affiliate intellectual property transfer? Even then, what differences might remain between international licensors and franchisors in the way they choose to organise their activities?