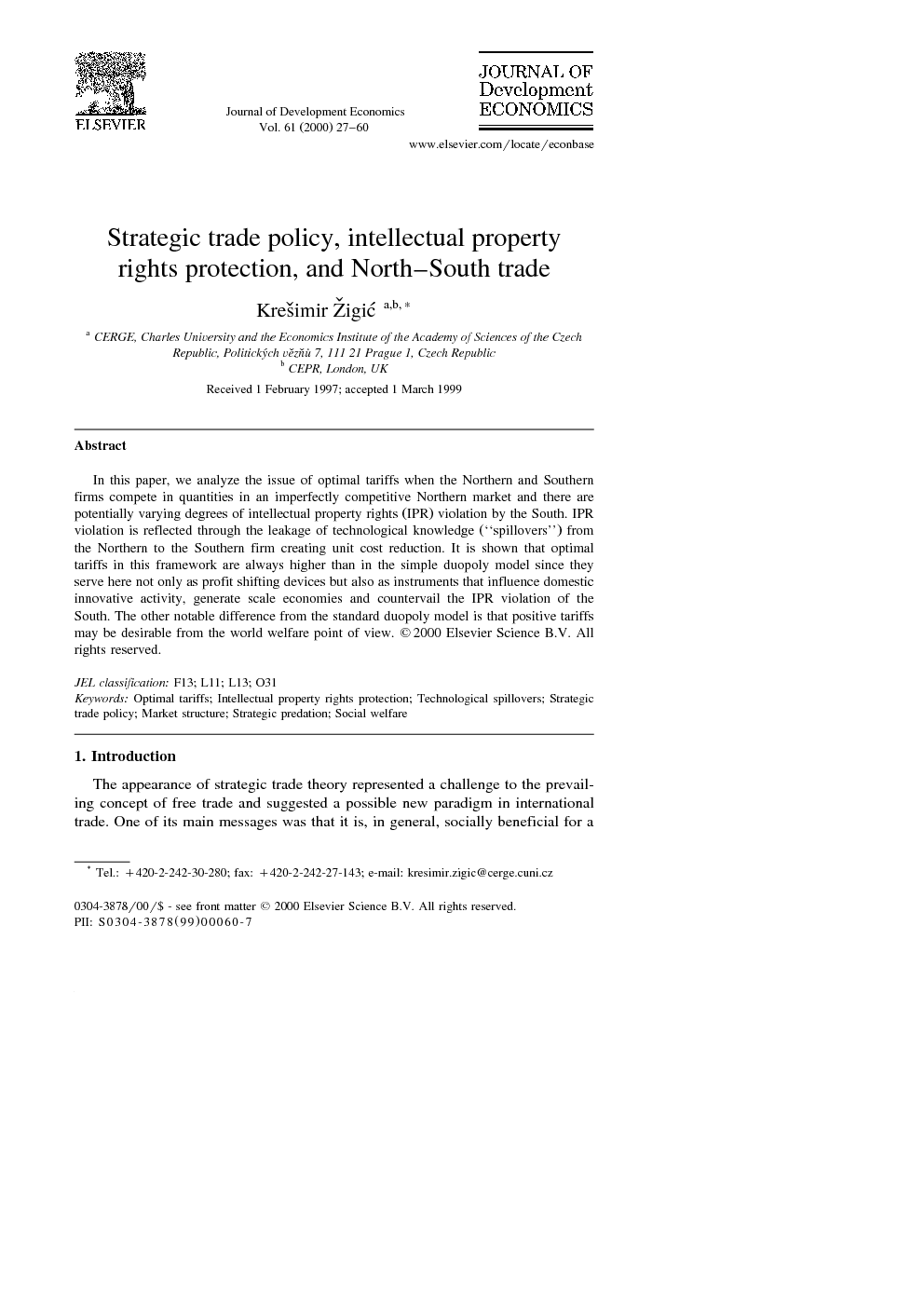 In this paper, we analyze the issue of optimal tariffs when the Northern and Southern firms compete in quantities in an imperfectly competitive Northern market and there are potentially varying degrees of intellectual property rights (IPR) violation by the South. IPR violation is reflected through the leakage of technological knowledge (“spillovers”) from the Northern to the Southern firm creating unit cost reduction. It is shown that optimal tariffs in this framework are always higher than in the simple duopoly model since they serve here not only as profit shifting devices but also as instruments that influence domestic innovative activity, generate scale economies and countervail the IPR violation of the South. The other notable difference from the standard duopoly model is that positive tariffs may be desirable from the world welfare point of view.

In this paper, we have examined the functions of tariffs in the situation when there are IPR violations. Besides their traditional role as a device to shift foreign profit to the domestic treasury and domestic profit, tariffs in these circumstances have an additional role as an instrument that reduces IPR violations and, therefore, stimulates the domestic firm to invest in socially beneficial R&D that in turn leads to better exploitation of the scale economies. In this setup, optimal tariffs are higher than in the standard duopoly model without R&D investment and IPR violations.37 Since the appropriation of R&D output by the South is a form of informal technology transfer, it is not a priori clear that the world planner should discourage it. The world planner would have to weigh carefully the benefits of innovation diffusion and the costs of diminished incentives and decreased R&D investment in the North. Such considerations will urge a zero or low tariff if R&D efficiency is low (see Fig. 3), but it will require a prohibitive (tp or tm) tariff if R&D efficiency is high. As is well known, the optimal design of strategic trade policy is sensitive to the type of market competition (see Spencer, 1986). Bertrand competition will not be so useful here since we concentrated on duopoly as the core model. A moment of reflection tells us that in our setup the domestic market will be completely covered by a domestic producer who charges a price equal to the unit cost of the foreign firm, that is, p*=α−β(gx)+t, provided that pm≥p* where pm stands for the monopoly price. Thus, the resulting market form will be a constrained monopoly (or the unconstrained one if pm≤p*). As shown in Žigić, 1998b, the crucial comparative static result — the impact of tariff on the R&D expenditures — is qualitatively the same under either quantity or price competition in the case of a constrained monopoly. The optimal tariff is however, lower in the Bertrand case since the competition is tougher and there are, in general, fewer distortions to correct. An interesting extension of our model would allow for the announcement of a strategic trade policy to precede the actual intervention. This would imply changes in the moves in the game and as a consequence the government would leave itself open to strategic manipulation by its own firm (see, for instance, Grossman and Maggi, 1998). The domestic firm may want to engage in costly and possibly welfare reducing signalling in order to seek rents from the government. For instance, it may be profitable for the domestic firm with low R&D efficiency to pretend that it is of the high R&D efficiency type. The welfare implications of these issues, in particular whether free trade may reemerge as the optimal solution for a certain range of parameters in this setup, seem to be an interesting topic for future research.