عنوان انگلیسی
How does the first job matter for an individual’s career life in Japan?
دانلود فوری مقاله + سفارش ترجمه 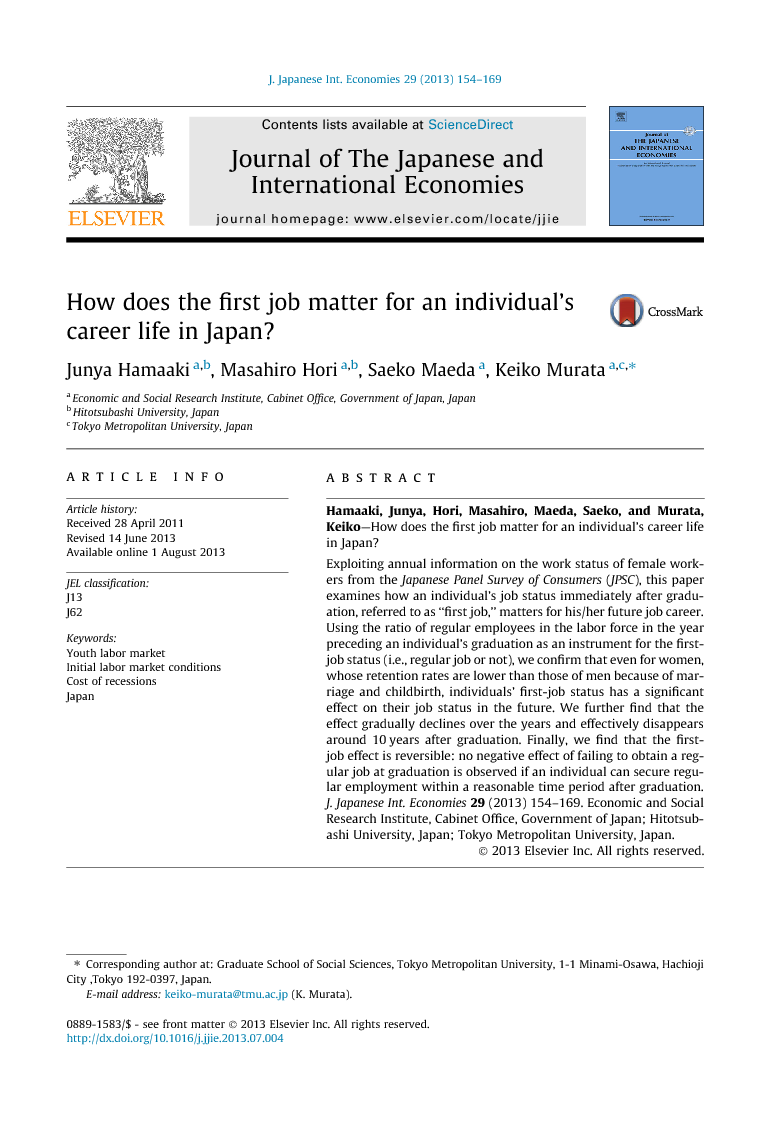 Exploiting annual information on the work status of female workers from the Japanese Panel Survey of Consumers (JPSC), this paper examines how an individual’s job status immediately after graduation, referred to as “first job,” matters for his/her future job career. Using the ratio of regular employees in the labor force in the year preceding an individual’s graduation as an instrument for the first-job status (i.e., regular job or not), we confirm that even for women, whose retention rates are lower than those of men because of marriage and childbirth, individuals’ first-job status has a significant effect on their job status in the future. We further find that the effect gradually declines over the years and effectively disappears around 10 years after graduation. Finally, we find that the first-job effect is reversible: no negative effect of failing to obtain a regular job at graduation is observed if an individual can secure regular employment within a reasonable time period after graduation.

Using the employment histories of female workers constructed from micro data of the Japanese Panel Survey of Consumers, this paper examined how finding a job as a regular employee at graduation matters for an individual’s future employment career. We confirm that even for female workers (whose retention rates are lower than those of men), an individual’s job status at graduation matters significantly for the future job status (i.e., regular job or not). The effect gradually declines and effectively disappears around 10 years after graduation. However, the observed first-job effect depends on the post-graduation career path taken by the individual: even if individuals failed to find a regular job at graduation, if they managed to find regular employment at least once within the first few years after graduation, their probability of being in regular employment thereafter was not notably lower than that of those who found regular employment immediately at graduation. That being said, though, because of hiring practices in Japan, those who failed to land a regular job at graduation will find it much more difficult to do so in later years unless labor market conditions improve dramatically. These empirical findings provide some clues to understanding the mechanisms underlying the negative cohort effect associated with entering the labor market during a recession and provide some indications for a policy response in prolonged recessions such as during the employment “ice age.” As for the background mechanisms, it can be argued that the burden of the negative cohort effect from a recession falls disproportionately on individuals who are unsuccessful in their first-job hunt (rather than falling evenly on all individuals in that cohort). Moreover, our finding that the first-job effect becomes irrelevant if an individual is fortunate enough to find a job as a regular employee within a reasonable time period after graduation suggests that, in the context of the Japanese employment system, the first-job effect results at least partially from the negative signal or stigma attached to having been unsuccessful in the first round of job hunting at graduation. Our findings also highlight the need for policies to assist those who lose out in the first-job hunt, especially when the economy is experiencing prolonged stagnation such as during the “lost decade” or the employment “ice age.” As it appears to be possible for individuals to make up for the negative effect caused by the bad luck of graduating when macroeconomic conditions are unfavorable if they can find a job as a regular employee within a reasonable time period, systematic policies to provide support for the employment of young workers who failed to find a (good) job in their first round of job hunting could provide substantial benefits. In this context, the recent proposal by the Japan Association of Corporate Executives (Keizai Doyukai) that recruiting firms should treat all workers that have graduated within less than 3 years as if they were new graduates is an encouraging step in the right direction.