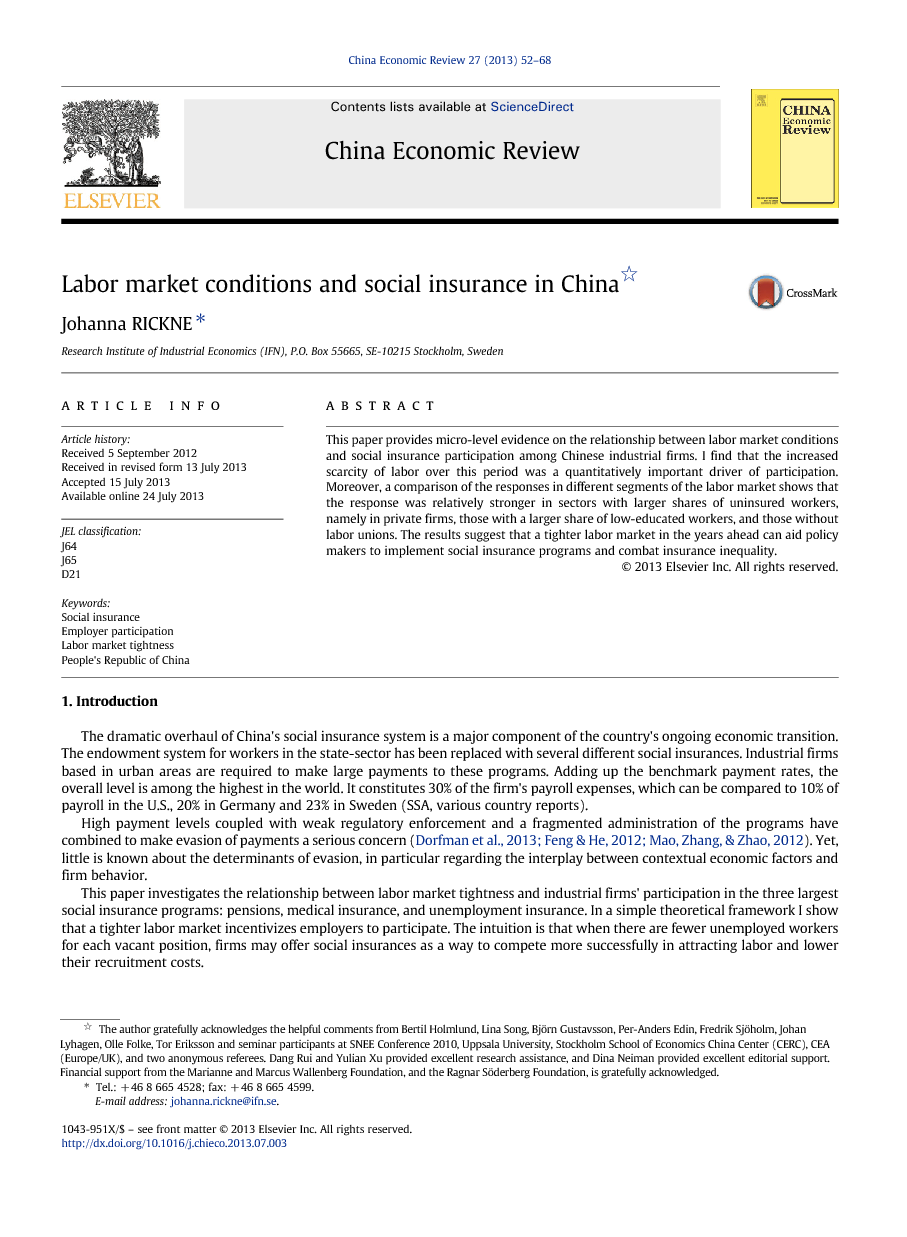 This paper provides micro-level evidence on the relationship between labor market conditions and social insurance participation among Chinese industrial firms. I find that the increased scarcity of labor over this period was a quantitatively important driver of participation. Moreover, a comparison of the responses in different segments of the labor market shows that the response was relatively stronger in sectors with larger shares of uninsured workers, namely in private firms, those with a larger share of low-educated workers, and those without labor unions. The results suggest that a tighter labor market in the years ahead can aid policy makers to implement social insurance programs and combat insurance inequality.

The dramatic overhaul of China's social insurance system is a major component of the country's ongoing economic transition. The endowment system for workers in the state-sector has been replaced with several different social insurances. Industrial firms based in urban areas are required to make large payments to these programs. Adding up the benchmark payment rates, the overall level is among the highest in the world. It constitutes 30% of the firm's payroll expenses, which can be compared to 10% of payroll in the U.S., 20% in Germany and 23% in Sweden (SSA, various country reports). High payment levels coupled with weak regulatory enforcement and a fragmented administration of the programs have combined to make evasion of payments a serious concern (Dorfman et al., 2013, Feng and He, 2012 and Mao et al., 2012). Yet, little is known about the determinants of evasion, in particular regarding the interplay between contextual economic factors and firm behavior. This paper investigates the relationship between labor market tightness and industrial firms' participation in the three largest social insurance programs: pensions, medical insurance, and unemployment insurance. In a simple theoretical framework I show that a tighter labor market incentivizes employers to participate. The intuition is that when there are fewer unemployed workers for each vacant position, firms may offer social insurances as a way to compete more successfully in attracting labor and lower their recruitment costs. To empirically test this hypothesis I draw upon panel data for industrial firms observed in 2000–2007. The firms within the dataset together make up nearly 90% of China's industrial output and account for two thirds of industrial employment. Although the data does not cover the most recent years, the conclusions we can draw remain relevant. The broader question of how the non-wage compensation of firms changes in response to labor market conditions is relevant for understanding the development of the labor market and the welfare state. In particular, it is relevant for the ongoing discussions of the impacts of the joint processes of an aging population and changing patterns of rural–urban migration (see, for example, the insightful discussions provided by Cai, 2010, or Meng, 2012). In this context, firms' provision of social insurance coverage is understudied, yet it has a great impact on production costs, worker welfare, and the functioning of the labor market. After conducting benchmark tests on the full sample of firms, I examine the question of heterogeneous responses. I divide the firms into two segments based on previous scholarly work on both regulatory compliance and labor market segmentation in China. In the upper segment I include state-owned and foreign-owned firms, firms that have an in-house branch of China's only legal union, and firms with more highly educated workforces. The lower segment is delineated as collective-owned and private domestic firms, those that lack unions and those with higher shares of low-educated workers. The results of the empirical analysis confirm the hypothesis that firms respond to tighter regional1 labor markets by offering social insurance, a behavior that is captured by a firm moving from zero to non-zero social insurance expenditures. This response is found for both the pension and the medical insurances, as well as for the unemployment insurance. Relating the size of the estimated effects to the trends of increased tightness over the study period, almost half of the increase in participation could be accounted for by this factor. This result suggests that the increase in labor market tightness aided policy makers in the process of implementing social insurance reforms in the urban industrial sector. Moreover, future periods of labor scarcity can be expected to aid – rather than hinder – the development of the welfare state. The heterogeneity analysis offers some additional and interesting findings. First, and not surprisingly, the descriptive evidence shows that firms in the upper segment of the labor market are substantially more likely to participate in the programs compared to firms in the lower segment. A more surprising finding is that the response to labor market tightness is stronger in the lower segment. In other words, tightness had the largest impact on the sectors with the largest share of uninsured workers, triggering a convergence in regulatory compliance and a narrower gap in non-wage compensation between sectors. Instead of mainly reallocating production to avoid worker shortages and higher labor standards, it appears that a substantial number of private domestic firms and firms with a larger share of low-educated workers improved their work conditions. The paper is organized as follows: Section 2 outlines social insurance reforms in China's urban areas. Section 3 surveys the theoretical and empirical literatures that have focused on employer provision of social insurance, in particular the literatures related to regulatory compliance and social corporatism. Based on insights from these literatures I formulate a simple theoretical model in which social insurance is a recruitment tool that firms are incentivized to use when the labor market becomes tighter. Section 4 gives details about the data and variables used to test this conjecture, with special attention to the measures of labor market tightness and insurance participation. Section 5 describes the estimation method and the baseline results. It also shows that the results are robust to, among other things, various sample restrictions, estimation method, and to controls for measurement error in both the dependent and independent variables. Section 6 diversifies the analysis across the dimensions of firm ownership, workforce education level, and firm unionization. Section 7 concludes.

In market systems, firms use incentives to reward workers for mobility and to attract productive personnel. In socialist states, creating such a flexible labor market entails large institutional adjustments. One important institutional change is the move from a social insurance system based within the work unit to a system with separate insurances which are also portable across firms. China has implemented this shift, but evasion of payments among firms remains a problem. At the same time, little is known about the factors that drive compliance with regulations. This paper aims at furthering our understanding of the social insurance participation decision of Chinese industrial firms by analyzing the role of labor market conditions. In three extensions, I also analyze whether the response to this labor market signal differed over labor market segments defined in terms of ownership, education level of the workforce, and unionization. The baseline results show that during the 2000–2007 period, the trend of an increasing tightness on regional labor markets could explain about half of the increase in the participation among medium- and large-size firms. The general insight is thus that firms used non-wage benefits as a means to attract labor in response to market signals, indicating the existence of efficiency concerns in the remuneration process. The results also show that the progress in implementing the new social insurance programs was substantially aided by tighter labor market conditions. When interpreting the economic relevance of this effect, it is important to recall that the dichotomous measure of participation used in this paper only captures coverage provided to at least one worker in the firm. Internal segmentation of coverage remains outside the scope of the analysis, meaning that the consumption and flexibility response to improved participation is likely to be smaller than what is suggested by shifts in the dichotomous measure. Extending the analysis to firm sub-divisions yielded several additional findings. Participation in social insurance programs was more common in the “upper segment” of the labor market: firms with more high-educated workers, under state- and foreign ownership, and firms having in-house unions. Conversely, the response to labor market conditions from the baseline analysis was found to mainly stem from the lower segment, namely from firms under private ownership, with more low-educated workers and lacking labor unions. Why did the lower segment respond more forcibly to labor scarcity? One interpretation is that tightness was more severe among worker groups hired by these firms. Another is that they are more likely to hire workers on open labor markets and in competition with other employers. A third is that they are less attractive for workers in terms of worker conditions, wages, etc. which make them the “first hit” by a reduced worker supply. Regardless of the precise mechanism behind the result, it can be seen as reassuring from a policy perspective. A stronger response in firms with lower initial participation rates means that the inequality of worker protection across sectors decreased. In turn, and noting that current labor market trends have been pointed out as resembling the 2000–2007 period (Das and N'Diaye, 2013 and Meng, 2012), tapering migration flows and China's demographic transition may contribute to further reductions in inequality and extensions of the welfare state. One caveat to this interpretation is the incomplete coverage of the dataset. Even though the results suggest that tightness drove a convergence between more and less formalized sectors of the industrial labor market, the least formalized sectors (small and informal firms) do not form part of the analysis and remain the hardest to reach by government regulation. Finally, the precision of the results are limited by the lack of detail in the measurements of both the labor market conditions and the participation behavior of the firm. If possible, future studies could consider the use of employer–employee data to further our insights on the relationship between macroeconomic developments and insurance inequality within the firm. Accessing more detailed measures on the composition of unemployment and vacancies, both by worker groups and for smaller geographical units, would also be of great value for arriving at more precise answers and policy recommendations.