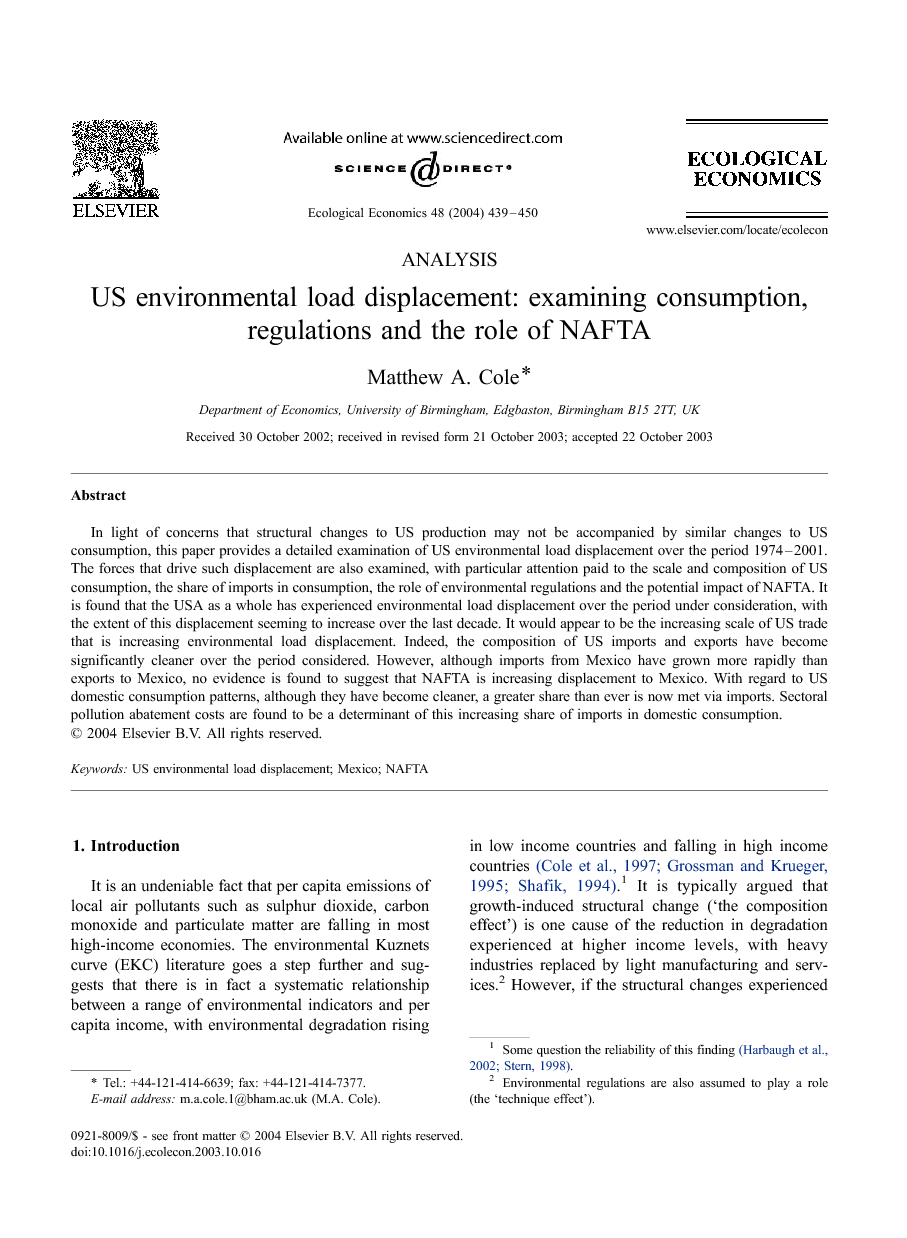 In light of concerns that structural changes to US production may not be accompanied by similar changes to US consumption, this paper provides a detailed examination of US environmental load displacement over the period 1974–2001. The forces that drive such displacement are also examined, with particular attention paid to the scale and composition of US consumption, the share of imports in consumption, the role of environmental regulations and the potential impact of NAFTA. It is found that the USA as a whole has experienced environmental load displacement over the period under consideration, with the extent of this displacement seeming to increase over the last decade. It would appear to be the increasing scale of US trade that is increasing environmental load displacement. Indeed, the composition of US imports and exports have become significantly cleaner over the period considered. However, although imports from Mexico have grown more rapidly than exports to Mexico, no evidence is found to suggest that NAFTA is increasing displacement to Mexico. With regard to US domestic consumption patterns, although they have become cleaner, a greater share than ever is now met via imports. Sectoral pollution abatement costs are found to be a determinant of this increasing share of imports in domestic consumption.

It is an undeniable fact that per capita emissions of local air pollutants such as sulphur dioxide, carbon monoxide and particulate matter are falling in most high-income economies. The environmental Kuznets curve (EKC) literature goes a step further and suggests that there is in fact a systematic relationship between a range of environmental indicators and per capita income, with environmental degradation rising in low income countries and falling in high income countries Cole et al., 1997, Grossman and Krueger, 1995 and Shafik, 1994.1 It is typically argued that growth-induced structural change (‘the composition effect’) is one cause of the reduction in degradation experienced at higher income levels, with heavy industries replaced by light manufacturing and services2. However, if the structural changes experienced by the manufacturing sector are not accompanied by similar changes to the structure of consumption then the composition effect is simply displacing pollution from one country to another. This environmental load displacement also implies that today's developing regions will have no one to whom they can displace their pollution. It is for these reasons that a number of studies have now argued that future research should focus on the environmental impact of consumption at the expense of the more traditional emphasis on production Ekins, 1997, Muradian et al., 2002 and Rothman, 1998. It is international trade that allows the environmental impact of domestic consumption to differ from that of domestic production. Not surprisingly, concerns over environmental load displacement have, therefore, increased as the liberalisation of trade has increased. Furthermore, since trade liberalisation implies that cost differentials between countries will become increasingly important, inter-country differences in the stringency of environmental regulations have also been implicated as a possible cause of environmental load displacement. The resultant pollution haven literature has found mixed results, although a number of recent papers claim that such regulations can influence international trade and investment flows Ederington and Minier, 2003 and List and Co, 2000. The formation of NAFTA, resulting in liberalised trade between the US, a high wage, high regulation economy, and Mexico, a low wage, low regulation economy, raised fears that the US, in particular, was likely to experience environmental load displacement. Ross Perot, Presidential candidate in the 1992 US elections, famously warned of the ‘giant sucking sound’ of production and jobs fleeing to Mexico due to the perceived cost advantages associated with Mexico's lower wages and less stringent regulations. Schatan (2000), however, argues that the composition of Mexican manufacturing has not shifted towards pollution intensive industries and hence Mexico has not become a pollution haven. She argues that any post-NAFTA increase in pollution is a result of an increase in the scale of output, rather than due to a change in composition. Others have highlighted the adverse environmental consequences of the rapid growth of the US–Mexico border region, which would partly appear to be a result of the relocation of US firms (Hufbauer et al., 2000). In light of these concerns, this paper provides a detailed examination of the extent of the USA's environmental load displacement over the period 1974–2001, and considers the forces that drive such displacement. More specifically, Section 2 employs Muradian et al.'s notions of the balance of embodied emissions in trade (BEET) and the environmental terms of trade (ETT), and also examines the pollution intensity of US imports and exports. Total US trade and US trade with Mexico are analysed separately to allow a clearer focus on any possible NAFTA effect. Section 3 then considers some of the factors that are driving load displacement, focusing on US domestic consumption, the share of imports in consumption, and the possible impact of US environmental regulations. Beginning with domestic consumption patterns, both the scale and the composition of US consumption are examined, as are the share of imports in consumption for the manufacturing sector as a whole and for individual ‘dirty’ sectors. The extent to which environmental regulations influence the share of imports in consumption is then investigated econometrically. The role played by NAFTA is considered throughout. Finally, Section 4 summarises and concludes.

This paper has examined the extent to which the USA has displaced its environmental load to its trading partners over the period 1974–2001. It was found that the pollution embodied in total US imports has generally been greater than that embodied in exports throughout this period, with the gap widening since 1992. Furthermore, although the ETT have fluctuated over time, they have fallen since the early 1990s implying that the pollution embodied in US imports has been growing faster than that in its exports. The findings suggest that it is the changing scale of US trade (i.e. imports being larger, and growing more rapidly, than exports) that is increasing environmental load displacement. Indeed, such displacement is occurring despite the fact that the composition of both US imports and exports has become significantly cleaner throughout the period under consideration. The results provide no evidence to suggest that the US is increasingly displacing its pollution to Mexico, despite the warnings to this effect from the opponents of NAFTA. Since the late 1980s pollution embodied in US exports to Mexico has been greater than that embodied in imports from Mexico, despite the fact that the actual volume of exports has been less than the volume of imports. This has arisen as a result of a rapid decline in the pollution intensity of US–Mexican imports, with such intensities now lower than the equivalent intensities for US–Mexican exports (compare Fig. 8 with Fig. 6). Turning to the forces that drive environmental load displacement, and particularly the role played by domestic consumption, it was found that the pollution intensity of such consumption has fallen steadily over the period 1980–1996. Furthermore, the scale of consumption from the four most pollution intensive sectors, responsible for the vast majority of manufacturing emissions, has not risen significantly. Indeed, of these four sectors, only the consumption of chemicals and paper appears to have risen over the period 1974–1996, with the consumption of metals falling significantly. As a result, the emissions associated with the consumption from these four sectors have actually fallen steadily since the early 1980s. There is, therefore, clear evidence to suggest that consumption patterns in the US are becoming cleaner18. Whilst this may seem at odds with the finding that US environmental load displacement has increased over the same period, it was found that an increasing share of consumption is being met via imports. The share of imports in consumption has risen rapidly throughout the period 1974–1996, for all manufacturing sectors. The share of Mexican imports in consumption has risen more rapidly than the share of total imports, although there is little evidence to suggest that the share of imports is higher, or has grown more rapidly, in the pollution intensive industries. Section 3 concluded by examining the extent to which the USA's relatively stringent environmental regulations have contributed to environmental load displacement. Such regulations, in the form of pollution abatement costs, were found to be a positive, statistically significant, determinant of the share of imports in consumption, whether the latter were measured in gross or net form or as total imports or imports from Mexico. Furthermore, the same finding was made whether abatement costs were considered to be exogenous or endogenous. Finally, the limitations of this study should be noted. By utilising constant pollution intensities over time, this paper does not incorporate the technique effect, i.e. the reduction in emissions stemming from policy and technology. Thus, all pollution trends over time are based on scale and/or composition effects alone, depending on the Figure in question. Whilst this may be interpreted as a weakness, it could also be seen as a strength. Holding the technique effect constant allows a more direct focus on the structural changes experienced by a mature economy such as the USA, and aids the identification of the effects of an exogenous shock such as NAFTA. The reliability of the analysis does hinge, however, on the accuracy of the pollution intensities.