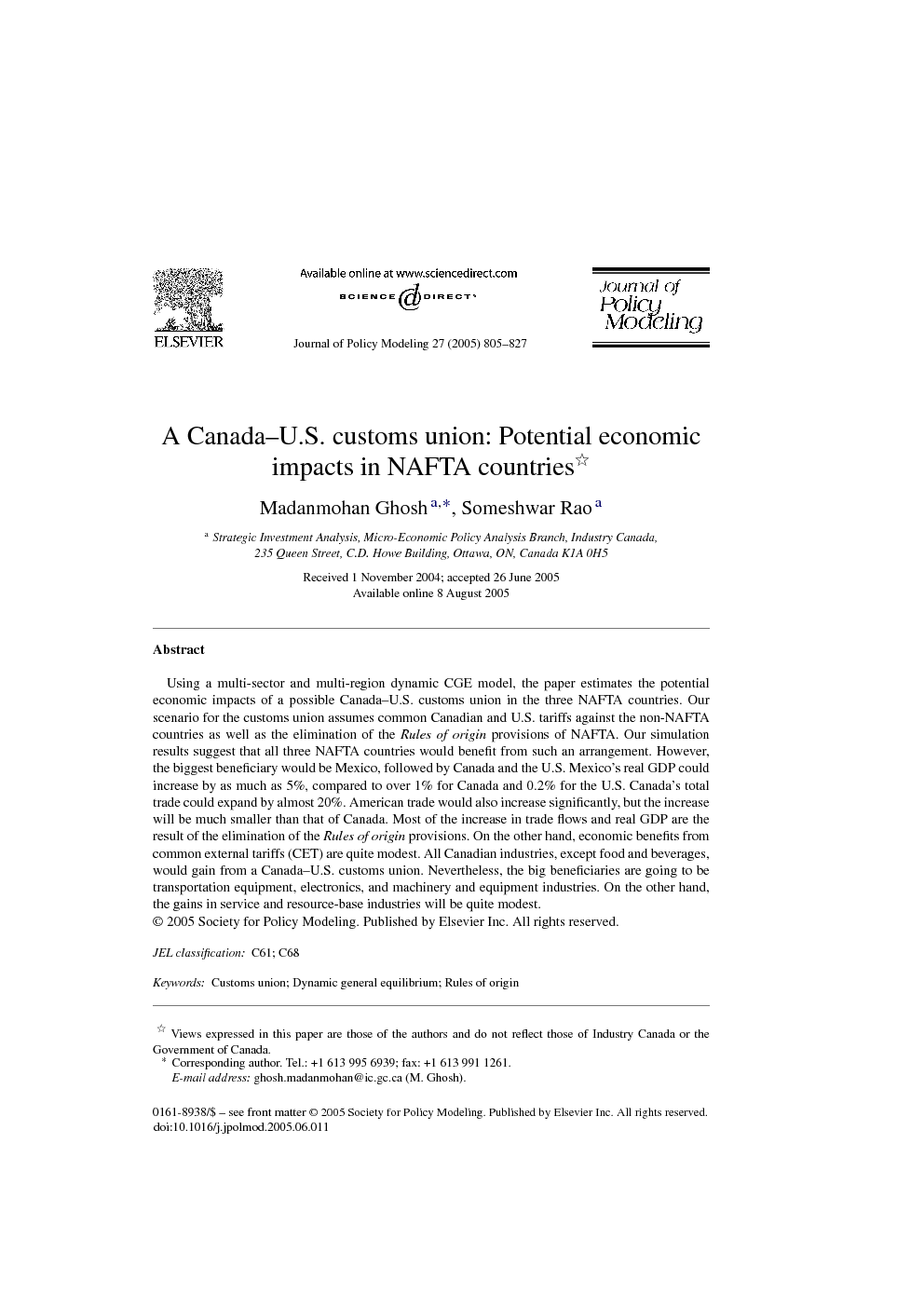 Using a multi-sector and multi-region dynamic CGE model, the paper estimates the potential economic impacts of a possible Canada–U.S. customs union in the three NAFTA countries. Our scenario for the customs union assumes common Canadian and U.S. tariffs against the non-NAFTA countries as well as the elimination of the Rules of origin provisions of NAFTA. Our simulation results suggest that all three NAFTA countries would benefit from such an arrangement. However, the biggest beneficiary would be Mexico, followed by Canada and the U.S. Mexico's real GDP could increase by as much as 5%, compared to over 1% for Canada and 0.2% for the U.S. Canada's total trade could expand by almost 20%. American trade would also increase significantly, but the increase will be much smaller than that of Canada. Most of the increase in trade flows and real GDP are the result of the elimination of the Rules of origin provisions. On the other hand, economic benefits from common external tariffs (CET) are quite modest. All Canadian industries, except food and beverages, would gain from a Canada–U.S. customs union. Nevertheless, the big beneficiaries are going to be transportation equipment, electronics, and machinery and equipment industries. On the other hand, the gains in service and resource-base industries will be quite modest.

Almost all world economies are increasingly integrating with one another. Dramatic reductions in transportation and communication costs, rapid technological changes in production processes, fierce international competition for markets and factors of production, bilateral, regional and multilateral trade agreements have all contributed to the increased economic interdependence among the national economies. Canada too is actively participating in the globalization process. Canada is one of the most open economies in OECD countries. At present, exports account for more than 40% of Canada's real GDP. Similarly, imports represent about 40% of GDP. Furthermore, since 1990 Canada's export intensity and import penetration have increased considerably. Inward and outward direct investment orientation has also increased significantly. Canada is a net exporter of capital, and the gap is widening, a dramatic reversal of the situation 20 years ago, when Canada used to be a large net importer of capital. The increased outward orientation of the Canadian economy is largely the result of increased economic linkages with the U.S. Currently, more than 85% of Canada's merchandise exports are destined to the U.S., compared to about 70% in 1990. However, the U.S. share in our imports increased only marginally. The booming U.S. economy, the depreciation of the Canadian dollar vis-à-vis the American dollar and the two free trade agreements (FTA and NAFTA) contributed to the increased economic integration between the two economies in the 1990s (Acharya, Sharma, & Rao, 2003). Canada is also an important trading partner for the U.S. Canada accounts for about 20% of U.S. exports and imports. Canada is the largest trading partner of 39 U.S. states. In addition, Canada is the largest supplier of U.S. energy requirements. The increased economic linkages between Canada and the U.S. have been beneficial to Canada. For instance, close to 80% of the growth in Canadian manufacturing shipments in the 1990s was driven by the growth in exports to the U.S. Research done for Industry Canada strongly suggests that FTA and NAFTA have also contributed positively to Canada's productivity performance. The available research also show that both inward and outward direct investment exerted a significant positive impact on the Canadian economy. Despite a high degree of interdependence between the two economies, there is a great deal of uncertainty about future of Canada–U.S. economic relations because of a number of factors: U.S. concerns about future terrorist threats and the security at the Canada–U.S. border; softwood lumber dispute and other trade irritants; trade frictions associated with the mad cow disease and the growing protectionism in the U.S., partly due to a huge and growing U.S. trade deficit. There has been a great deal of public discussion and debate in Canada about future Canada–U.S. economic relations. A number of researchers and policy analysts have proposed various initiatives to broaden and deepen the NAFTA.1 These include: harmonization of border measures and procedures with regard to customs, refugees and immigration; increased investments in transportation and border infrastructure; increased cooperation in countering terrorist threats; mutual recognition by Canada and the U.S. of each other's regulatory procedures and practices; free movement of labour, especially skilled workers, between the two countries; replacement of anti-dumping and countervailing in the two countries by competition laws; a monetary union or common currency; harmonization of Canadian and U.S. tariffs against non-NAFTA countries (common external tariffs) and the elimination of the rules of origin provisions of the NAFTA.2 But, to date, there is not much research on the economic impact of various NAFTA deepening proposals.3 The objective of our paper is to make a modest contribution towards narrowing this knowledge gap. Towards this goal, we estimate the general equilibrium economic impacts of a customs union between Canada and the U.S on the three NAFTA economies, disaggregated by major industries. The customs union scenario assumes common external tariffs by Canada and the U.S. as well as the elimination of the rules of origin provisions of NAFTA by all three countries. Products qualified under the rules of origin provisions face no duties when traded between Canada and the U.S., and pay either very low or no duties when traded between Mexico and the U.S. However, to qualify for the preferential duties, the importer must submit to the customs authorities a NAFTA Certificate of Origin. If a product does not qualify for the NAFTA tariff rate, it pays the MFN rate. The rules of origin provisions, in short, could impose a significant economic cost on Canadian exporters and importers. They could also introduce trade distortions by discouraging imports from non-NAFTA countries and increase of trade among NAFTA members. We use a multi-region/country and multi-industry dynamic CGE model for simulating the economic impacts of a customs union on industries in Canada, U.S. and Mexico. This model, unlike a static CGE model, allows us to track the time path of the economic impacts. We also check for the sensitivity of the size of impacts to changes in the size of the key parameters in the model, such as the substitution elasticities. The simulation results indicate that a customs union with the U.S. would provide significant economic benefits to producers as well as consumers in the three NAFTA countries. The biggest beneficiary would be Mexico, followed by Canada and the U.S. Mexico's real GDP could increase by as much as 5%. Canadian real GDP could increase by up to 1.1%, and the trade flows could increase by about 20%. All Canadian industries, except food and beverage, will gain. Transportation equipment, electronics and machinery and equipment industries will be the big beneficiaries. The paper is organized in the following way. In Section 2, we outline the structure of the dynamic CGE model, data sources and the main characteristics of the Canadian and U.S. economies in the base year (1997). We discuss the design of the customs union scenarios and the impacts in Section 3. In this section, we also provide sensitivity analysis of the simulation results with respect to key parameters of the model. Finally, in Section 4, we summarize the main findings of the paper and discuss their policy implications.

A multi-country/region, multi-sector dynamic CGE model is used to simulate the economic impacts of a customs union with the U.S. on Canadian industries. The customs union simulations assume common external tariffs by Canada and the U.S. against the non-NAFTA countries and the elimination of the rules of origin provisions of NAFTA by Canada, the U.S. and Mexico. The simulation results suggest that a customs union between Canada and the U.S. will increase Canada's trade flows by over 20%, and raise real GDP (value added) by as much as 1.1%. However, much of the impact on trade flows, consumption and real GDP come from the elimination of rules of origin, rather than from common external tariffs. Instead, the gains from common external tariffs are very small, less than 0.1% increase in real GDP. Mexico gains the most from the elimination of rules of origin. Its GDP increases by over 5%. On the other hand, U.S. GDP increases by only about 0.1%. As expected, the trade, output and employment effects vary considerably across major industries in the three NAFTA countries. For instance, in Canada, the big beneficiaries of a customs union with the U.S. would be autos and high-tech manufacturing industries. On the other hand, food industry would face significant adjustment challenges. In Mexico autos, high-tech manufacturing industries and textiles would gain the most. The industry impacts are generally very small in the U.S., except a significant negative impact on agriculture industry. The simulation results are fairly robust to the variations in the magnitude of substitution elasticities. In short, the simulation results strongly suggest the elimination of the rules of origin will deepen the economic linkages between the three NAFTA countries and would provide net economic benefits to all three countries, and the economic adjustment challenges would be quite manageable.