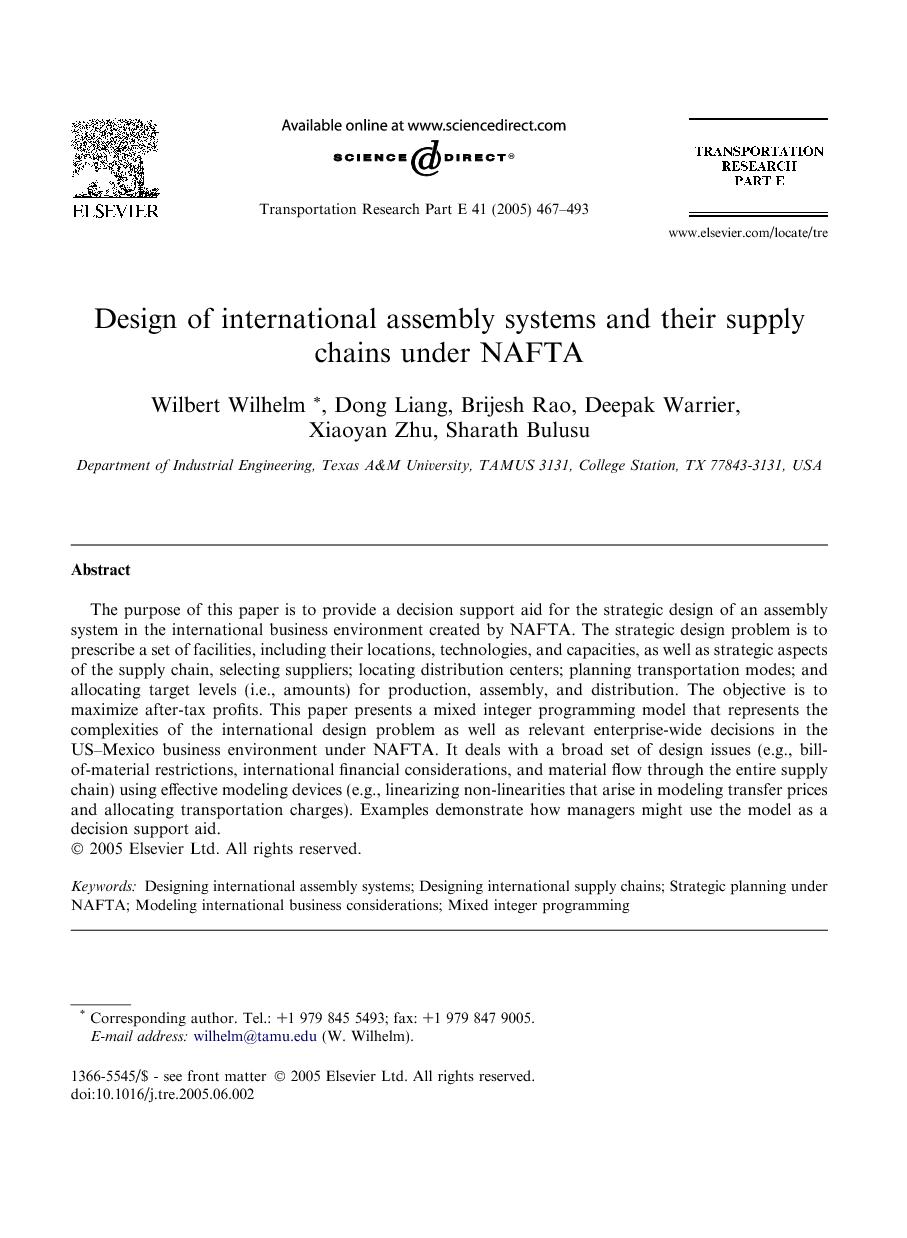 The purpose of this paper is to provide a decision support aid for the strategic design of an assembly system in the international business environment created by NAFTA. The strategic design problem is to prescribe a set of facilities, including their locations, technologies, and capacities, as well as strategic aspects of the supply chain, selecting suppliers; locating distribution centers; planning transportation modes; and allocating target levels (i.e., amounts) for production, assembly, and distribution. The objective is to maximize after-tax profits. This paper presents a mixed integer programming model that represents the complexities of the international design problem as well as relevant enterprise-wide decisions in the US–Mexico business environment under NAFTA. It deals with a broad set of design issues (e.g., bill-of-material restrictions, international financial considerations, and material flow through the entire supply chain) using effective modeling devices (e.g., linearizing non-linearities that arise in modeling transfer prices and allocating transportation charges). Examples demonstrate how managers might use the model as a decision support aid.

This paper achieves its objectives, contributing a model that represents the complexities of the international design problem, integrating relevant enterprise-wide decisions in the US–Mexico business environment under NAFTA, and examples that demonstrate how managers might use the model as a decision support aid. An assembly system is designed by prescribing facilities, including the location, technologies to be employed, and capacity of each. Strategic aspects of the supporting supply chain are designed by selecting suppliers; locating distribution centers; planning transportation modes; and allocating target levels (i.e., amounts) for production, assembly, and distribution. The objective is to maximize after-tax profit. Our model differs from other MIP models in that it deals with typical international issues (e.g., local-content rules (4d) and (4e) border-crossing costs (2a) and (2b), transfer prices (4a) and (4b), income taxes (3a), (3b) and (3c), exchange rates (1)) as well as features that are unique to the US–Mexico business environment (e.g., NAFTA terms, supplier location, proximity, transportation, warehousing). It deals effectively with design issues such as BOM restrictions (e.g., assembly operations, one component used in several end products (see discussion related to (7)), and one component used in several sub-assemblies on one end product (see discussion describing (6)), component usage, and facility flexibility (e.g., one component may be manufactured in several facilities (see discussion related to (9)) and one facility can manufacture several components (see discussion regarding (8)). It linearizes non-linearities that arise in modeling transfer prices and allocating transportation charges (see the discussion immediately following the model) and addresses strategic aspects of transportation and distribution. It addresses relevant financial considerations, prescribing transfer price and transportation-cost allocations (2a), (2b), (2c), (2d) and (4f), invoking safe harbor rules (4c), modeling graduated income tax rates (3a), (3b) and (3c), and incorporating exchange rates (1). It allows inventory and backorders to be incurred at each stage in the production/distribution process and it integrates material flow through the entire supply chain (i.e., suppliers, production, assembly, distribution, transportation, customers). Examples demonstrate that our model can be applied to analyze a number of trade-offs, for example, centralization versus decentralization, make versus buy, outsourcing versus in-house assembly, flexible versus dedicated technologies, and economies of scale versus economies of process. It can also be used to evaluate a variety of factors such as limitations on transfer prices, facility locations, tariff impacts, exchange rate impacts, tax impacts, dollar valuation, local-content rules, and the costs of transportation and distribution. Future research could expand the set of considerations represented by the model, for example, to model prices as a function of quantity produced or transportation cost as a function of the quantity shipped. Future research can also exploit the structures embedded in our model to devise a specialized solution method for application to large-scale instances. In addition, future research can devise an effective approach to optimize stochastic versions of the problem, for example, in cases for which it is important to treat demand-and/or-exchange-rate uncertainty explicitly. Our research is continuing along these lines.